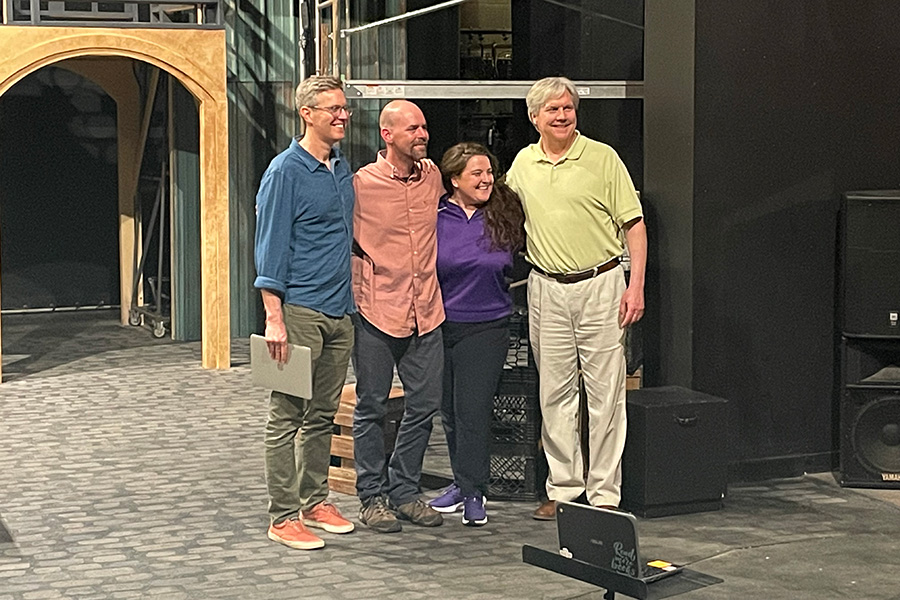 Theatre professor and Romeo and Juliet director Zach Fischer (left) with cast members who also happen to be Albion College employees: Drew Dunham (right) and Erik Achenbach (second from left) from the Office of the Registrar, and Lauren Perry, ’09, from the Office of Admission.

Romeo and Juliet. It’s one of those plays that doesn’t need an introduction or explanation. But no matter how well you think you know the story, be prepared for something new in the Department of Theatre’s upcoming production, which runs April 21-23 and 28-30 at Herrick Center’s Mainstage theatre.

“At its heart, Romeo and Juliet is about parents and children,” Fischer explains. “When you’re adapting Shakespeare, with so many layers to it, you have to distill down to questions and themes and build back out. I kept coming back to the issue of children refusing to hate in the way their parents do, the way they’ve been raised to hate.”

This large idea, says Fischer, is supported by the parent-child dialogue that hasn’t changed in more than 400 years.

“The expectation of parents that you will do what you’re supposed to do and make your parents proud, it’s still contemporary,” Fischer muses. “It’s really come home to me in the play that these parents don’t know how to talk to or relate to their kids. They are out of touch and overbearing, and their efforts to control their children are exactly what make events snowball out of control.” 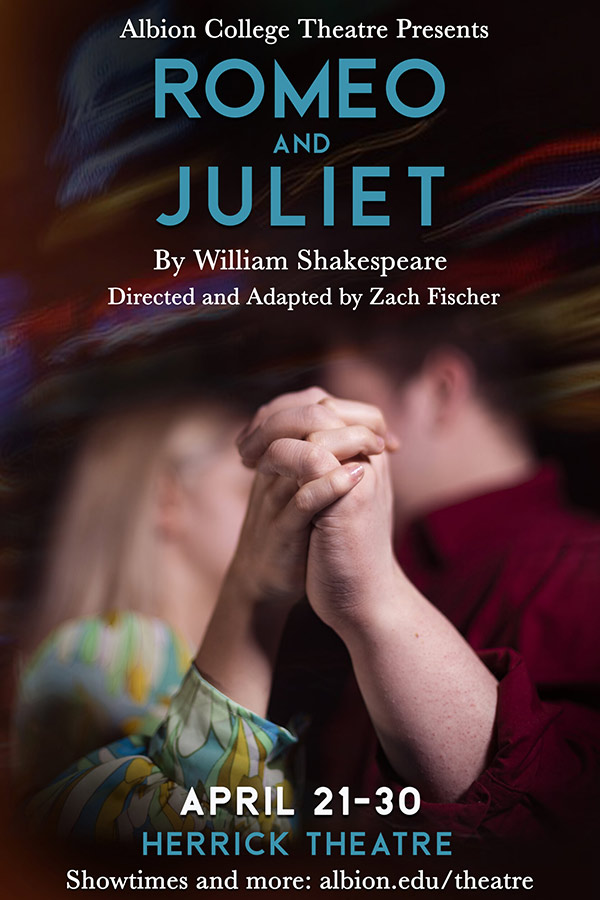 Romeo and Juliet opens April 21 and runs through April 30. The Albion College Department of Theatre typically presents a Shakespeare production every other year.

These insights led Fischer (who is directing the production) to cast three Albion staff members in the show: Dr. Drew Dunham, associate dean of academic affairs and registrar; Erik Achenbach, associate registrar; and Lauren Perry, ’09, assistant director of admissions, whom Fischer describes as “brutal” in scenes with Juliet (played by Alexis McGinley, ’22).

“It’s a little like riding a bike, being on stage again,” says Perry, who spent countless hours on the Herrick stage while majoring in theatre and English. “I’m impressed with all the things these students are doing while they give this show their all. It has been an incredible experience and it’s going to be an awesome show.”

Perry is central in Fischer’s decision to shift much of Lord Capulet’s role to Lady Capulet. “When Juliet’s mother appeals to her, it hits differently than when that appeal comes from her father, as it does in the original script,” Fischer says. “There’s a particular electricity between a mother and a daughter, and I love seeing that.”

“Things have been getting a little tense around the office, but we’re trying to keep that in check,” jokes Achenbach, who plays Lord Capulet against Dunham’s Lord Montague. The father of two teenagers himself, Achenbach brings an informed sympathy to the unsympathetic Lord Capulet.

“As a parent, I would never want the things Lord Capulet wants for Juliet,” Achenbach explains. “But I know what it’s like to talk to your kid and realize you don’t have a clue what they’re thinking about in a certain situation. As Lord Capulet, my reactions are prescribed, but some of the scenes with Lauren are frightening and the end of the play is pretty painful. I definitely feel those things.”

Working with the “grownup” cast added some scheduling challenges, but Fischer says the results were worth the effort.

“From the first read-through it was obvious how natural it felt to have the older cast,” he says. “They’ve raised the game. When you’re facing off against someone who has that parental bearing, it’s easier.

“It’s better than I hoped it would be,” Fischer says. “And I knew it would be good.”

Showtimes at 7:30 p.m.; Saturday matinees at 2 p.m. Admission to Herrick Center’s Mainstage theatre is free. The April 29 performance includes a post-show discussion with the cast. Albion College Theatre productions are public performances, open to all audiences from the campus and community.