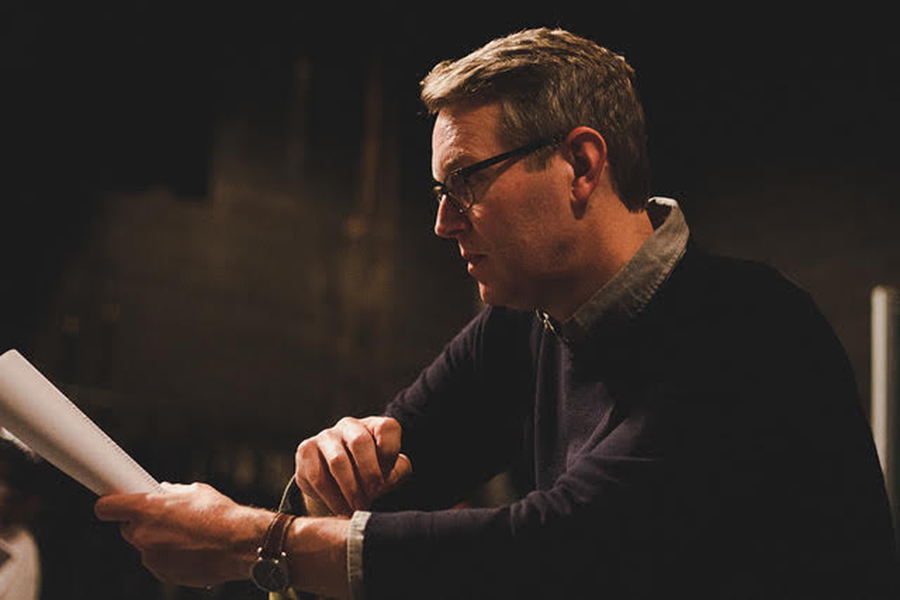 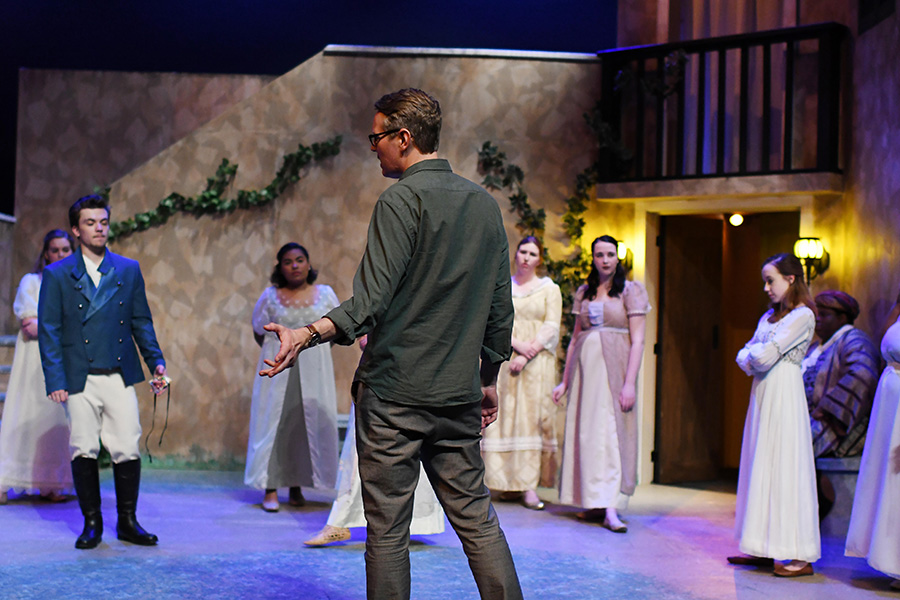 Dress rehearsal of Much Ado About Nothing, 2018. 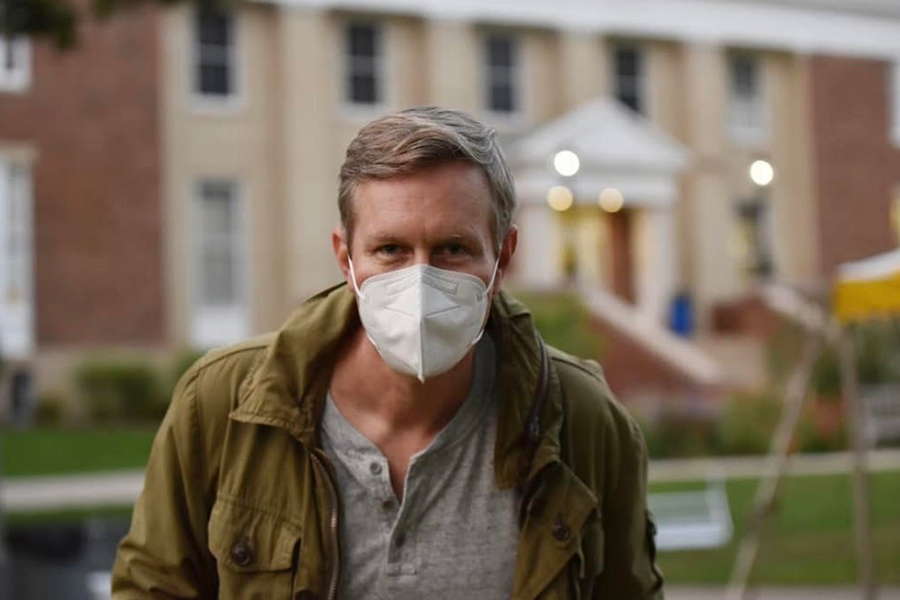 During staging of the outdoor production of Detroit '67 on the Quad, 2020.

For Zach Fischer, being chair of the Theatre Department at Albion College is the realization of a long-held dream. “It’s been something that my whole adult life I’ve intended to do, and it’s really fun to see it being realized,” the assistant professor of theatre says.

Fischer has dreamed of building a liberal arts theatre program since his undergraduate years, where he had his own transformative experience at a liberal arts college. This is his sixth year at Albion and his fifth as chair. During that time, the department has doubled in size. “I also have fantastic colleagues we’ve been able to hire who bring so much to the table,” Fischer says. “We’ve been able to bring in some extraordinary people.” 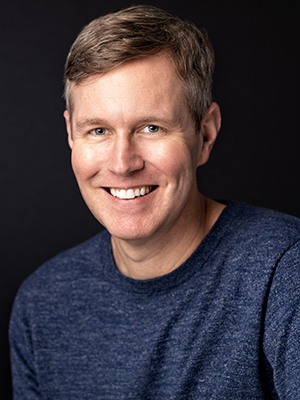 Screen credits for Fischer include television appearances on Gossip Girl, 30 Rock and Law and Order, among other shows. His theatre career includes many lead roles at professional Equity theatre companies across the country, including the Illinois, Michigan and Alabama Shakespeare Festivals, and a world premiere at the New York Musical Theatre Festival. While his duties as chair and professor take up much of his time now, Fischer continues to act, although his most recent role has been delayed due to COVID-19 precautions.

One of his favorite ways to perform theatre is through a rotating repertory, where the same company performs multiple plays simultaneously. He says performing multiple plays at once keeps him from growing stagnant as an actor, though it can be difficult to keep all the lines straight. “I used to tell my wife that I would feel like if I tilted my head too far to one side all the lines would fall out,” he says. “I felt like a coffee cup filled to the absolute brim.”

Fischer particularly likes to play bad guys. He enjoys the complexity of getting in the character’s head. “I tend to get cast as those guys in suits who are kind of jerks but have hearts of gold,” he says. “That’s kind of my wheelhouse.

“It’s always a really interesting psychology to try to get inside of,” he continues, “because if you’re playing an evil character, that character doesn’t see themself as evil. They believe they are righteous,” he says.

Embracing a character type can be difficult or disappointing for students, he says, but it’s an important lesson. Fischer emphasizes focusing on what is unique about each student and capitalizing on that. His main goal is “helping them learn early what it is that they do that’s special and making them appreciate that that is worth putting up on stage,” he says. “Students come in at 18, 19 years old and they’re like, ‘I don’t have enough experience with life, or I haven’t done enough to be interesting enough to deserve to be up here.’ And it’s totally the opposite.” 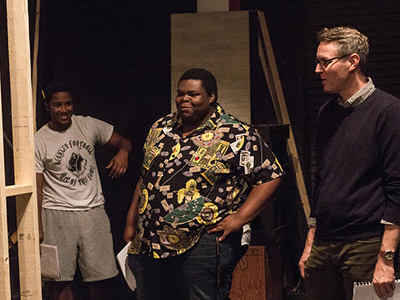 Fischer points out that Albion’s students come from a wide variety of backgrounds, and their life experiences enrich their acting. In fact, that’s one of his favorite things about teaching at Albion.

“What I love about the liberal arts model is that you have these incredibly diverse life experiences and interests [among the students],” he says, explaining that students from a variety of majors participate in theatre courses, and that many theatre majors are double majors. You might find a biology student in a lead role, an economics student serving as a production stage manager, and student-athletes participating as well. “When you put them all together it makes for a really interesting dynamic,” says Fischer.

When Fischer isn’t in the classroom, he’s staying active. “Wherever I am I have a guitar within reach. I used to keep them in cases and then I realized if I do that I don’t play them. It’s very therapeutic,” he says. “I like to run. I come up with a lot of my ideas for how to stage shows while I’m running.”

Fischer, who moved here from New York City, says he also enjoys all the nature in Michigan, especially the Whitehouse Nature Center on campus. “The Nature Center broke my brain when I first moved here because I came to Albion directly from Manhattan,” he says. “My wife and I had this little tiny fire escape that we would sit out on. We would make cocktails in the summertime and squeeze out the window to sit outside, and our knees would be touching because it was so small. We couldn’t stretch out. And there was a tree. And that was our nature,” he remembers. “When I first got here I remember my first week walking out of my office and walking over to the Nature Center. It just blew my mind—how is this possible that this is a hundred yards away from my office?”

Though he has hobbies, much of Fischer’s time is spent at the office. As chair, there are a lot of late nights. Still, Fischer remains enamoured with the opportunity.

“I just sort of get overtaken with this surreal sense of, ‘Oh my gosh, it’s really happening. I actually am doing the thing I always wanted to do,’ and I still pinch myself some nights when I walk out. I just wake up every morning really grateful that I am entrusted with growing the theatre program at Albion.”