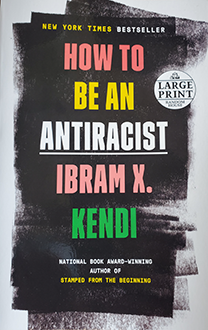 The 2022 CRE selection is How To Be an Antiracist by Ibram X. Kendi.

It matters in our lives as students and teachers, as professionals and citizens, as critical thinkers and people trying to make our way in a wonderfully complicated and richly multicultural world.

It introduces us to ideas we may never have encountered and makes possible relationships that might not have existed without it.

It cultivates our imaginations and feeds our curiosity.

Perhaps most importantly, reading can provide and expand common ground.

As a part of the CRE, all of Albion’s first-year students read a shared text that serves both to connect students to one another and to help them make the important shift from high school to college. Consistent with the College’s commitment to learning in and out of the classroom, the CRE involves both formal discussions in First-Year Seminars and informal discussions in the residence halls and around campus. Like the liberal arts, the dynamic and thoughtful CRE programming supports, challenges, expands, and enriches the students understanding of the core text and its ideas by helping them approach it from a number of different disciplinary perspectives.

The CRE is built on and affirms the deep relevance of reading and its ability to experience our world in more nuanced, thoughtful, and often joyful ways.

The 2022 CRE selection is How To Be an Antiracist by Ibram X. Kendi. First-year students will receive a copy of the book from their First-Year Seminar professor during the first week of Fall Semester classes.