College welcomes bestselling author of How to Be an Antiracist, this year’s Common Reading Experience selection. 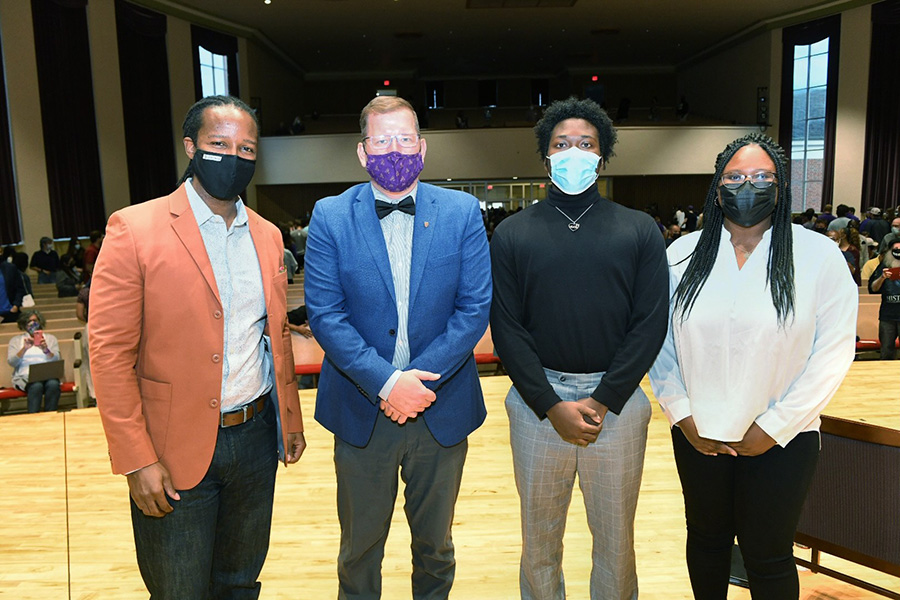 From left: Dr. Ibram Kendi, Albion College President Dr. Mathew Johnson, Domonic McDonald, ’22, and Akaiia Ridley, ’22 took a moment for a photo at the conclusion of the September 20 event in Goodrich Chapel.

Three separate Albion audiences—in Goodrich Chapel, Towsley Lecture Hall, and the Bohm Theatre—enjoyed a thoughtful, provocative, personal, and often funny conversation featuring noted author and educator Dr. Ibram X. Kendi on September 20. Kendi appeared live in Goodrich Chapel (simulcast to the other two locations) as the author of How to Be an Antiracist, the selection for the 2021 Richard M. Smith Common Reading Experience. The event also served as the 2021 Coy James Memorial Lecture in American History.

A professor and researcher at Boston University, author of five bestselling books, and popular guest of countless national radio and television shows, Kendi acknowledged that America’s obsession with race isn’t necessarily a bad thing. To explain this idea, he led the audience in an antiracist examination of an old social question: Why are Black people poor?

First, Kendi repeated an explanation that was initially created by scholars who believed there were several different species of modern humans. Simply put, “There’s something wrong with the group on the lower end, and something right with the group on the higher end,” Kendi said. “Racial disparity is reflective of racial hierarchy.”

The problem with this explanation, Kendi continued, is that there is no such thing as “racial hierarchy,” but too many people still confuse cultural differences with cultural shortcomings. “Those two groups are equal, neither is inferior or superior, and the group on the lower end is there because of racist policy,” he said. 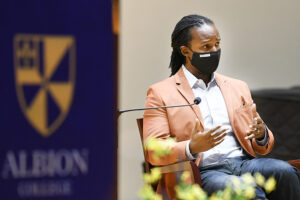 “The whole construction of ‘not racist’ is denial. When is it that people say they’re not racist? When they’ve just said or done something racist.” Dr. Ibram X. Kendi, one of Time magazine’s 100 Most Influential People of 2020, spoke in Albion College’s Goodrich Chapel on September 20.

It’s a new idea and a tough lesson for many. In How to Be an Antiracist, Dr. Kendi shared the racist ideas that were part of his own upbringing, and the long and painstaking work of weeding them out. “I’ve spent the past 21 years unlearning the idea that the problem is Black people,” he said.

To illustrate this assertion, Kendi noted the greater COVID mortality rate among Black people, despite surveys that showed Blacks are more concerned with COVID prevention. The data may make it seem that there is “something wrong with Black people,” as Kendi put it, but he pointed to the real culprit.

Systemic racism, he explained, has resulted in Black people living in more polluted neighborhoods, which in turn foster chronic disease. On top of that, these neighborhoods are more likely to be located far away from Level I Trauma hospitals.

As a result, many Black people with COVID “were presenting with advanced stages of disease at hospitals that didn’t have the best ability to save your life. What led to all this … that’s when you start to understand structural racism,” he concluded.

A survivor of stage IV colon cancer, Kendi drew provocative comparisons between the serious threat to his own survival, and his work addressing humanity’s survival. Along with climate change, nuclear war, and pandemic disease, Kendi told Albion that bigotry and inequity are problems that cannot be ignored.

Impossible? He admits maybe it is—but that’s not important. Hope is the critical piece.

“When I was diagnosed, I had two options: permanent pain through doing nothing, or permanent pain with the additional pain of treatment,” he recalls. “Why would I even go through all that?”

Kendi continued: “I didn’t have any option but to fight to survive. And if I’m going to do that, I can’t believe I’m going to die.”

“In 1860, people said it was impossible to end chattel slavery,” Kendi said, noting the “impossibilities” of electing a Black president or the independence of Haiti. “Humans have done the impossible time and again. Just because something seems impossible doesn’t mean we should not have hope. And if you don’t believe we can do the impossible, we’ll never succeed.”