For the seventh straight year, members of the College community collaborate with and mentor young teens in a highly impactful program. 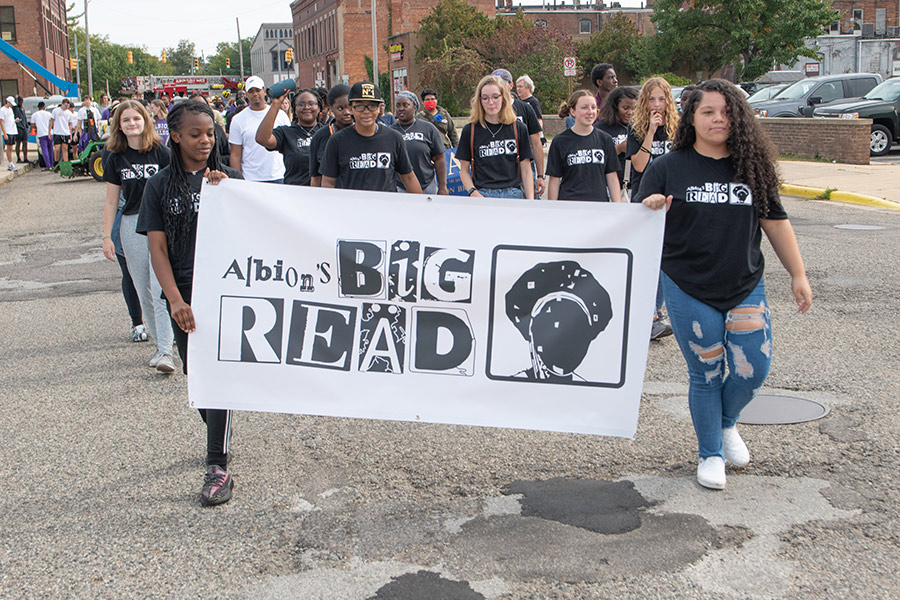 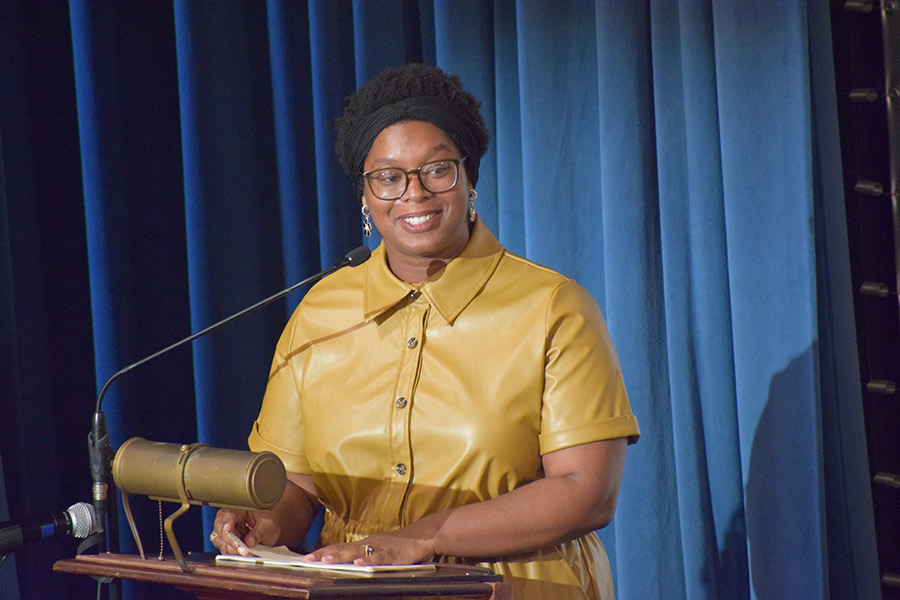 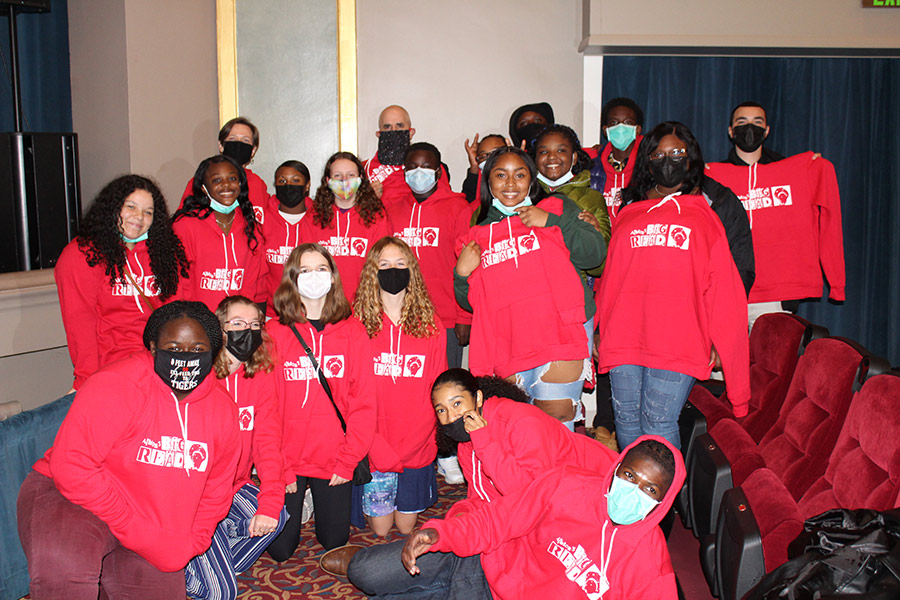 Wrapping up a rewarding experience: Big Read student leaders gather for photos at the conclusion of the October 25 Celebration event.

“Albion’s Big Read is a program that aims to change the world by changing young people’s relationship to reading,” says the program’s director, Dr. Jess Roberts, professor of English at Albion College. “So many young people associate reading with school and not life, with isolation and not community, with drudgery and not joy. They don’t experience reading as relevant to their lives. Albion’s Big Read seeks to make reading a joyful, relevant experience that strengthens communities and empowers young people.”

Albion’s Big Read is a program for eighth- to 10th-graders from Albion who attend Marshall Public Schools, with help from College volunteers (CVs) who attend or have recently graduated from Albion College; Roberts; Dr. Nels Christensen, associate professor of English; and this year’s program assistant director, Rhiki Swinton, ’16. The students—Albion’s Big Read—leaders read a book selected by Albion’s Big Read Planning Committee and participate in activities related to the book all summer. In October, the students lead discussions of the book with community members. October also features celebratory events that are open to the public. 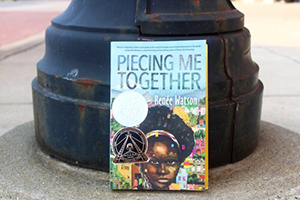 Piecing Me Together received the Coretta Scott King Award and a Newbery Honor in 2018.

For 2021, Albion’s seventh Big Read year, the book selected was Piecing Me Together by Renée Watson. Says Roberts: “We anticipated that Piecing Me Together would resonate deeply with our students. It is about a girl named Jade who does what so many Albion kids do. She gets on a bus every morning that takes her out of her own neighborhood and into another one to go to school.”

She adds, “For Jade, that means leaving a place where she feels seen and valued and going to a place where she doesn’t. It also means going from a home community where most people look like her—Jade is Black—to a predominantly white school where most people don’t. In school and in a mentoring program she joins, Jade feels frustrated and out of place. But with the help of the people who love her, she learns how to say what she feels, how to be who she is, and how to advocate for herself.”

The book is about connections, about fitting in and sticking out. It is a book about race, and body image, and police brutality, and finding your voice. Piecing Me Together is a 2018 Newbery Honor Book and has received the Coretta Scott King Award, a recognition for children’s and young adult books that explore Black experience and culture. It is also a New York Times bestseller.

D’Mitrius Robinson, ’22, a business major at Albion and a Big Read CV, says he “thought Piecing Me Together was extremely insightful and moving because the main characters were a lot like many of our leaders. With this, we were able to relate to and engage with the book on a deeper level as well as take real-world lessons from it, such as financial literacy.”

Piecing Me Together may have provided the inspiration and substance for this year’s program, but it is people who make Albion’s Big Read successful every year. Roberts describes the student leaders as “the beating heart of our program. Everything good and beautiful about our program comes from them.”

College Volunteer Classidy Scales, ’24, a psychology major with a minor in sexuality studies, says meeting those involved in this year’s Big Read was her favorite part of the experience. “I met some of the dopest people ever,” she says. “They eventually became good friends of mine.” She adds that there was “never a dull moment in the Big Read.”

It’s clear that Big Read creates a welcoming and supportive environment for young readers to flourish. “My favorite thing about participating is the family bonds we create between the director, the assistant director, the CVs and the leaders,” says Akaiia Ridley, ’22, a CV majoring in history with a minor in sociology.

Scales agrees. She has noticed Roberts’ and Christensen’s “ability to bring laughter and light into a room,” she says. “They are the reason Big Read is such a success—their ability to pick out a crew that matches their energies and make a space comfortable enough for students to be themselves is why the Big Read is what it is now.”

After an exciting summer, Albion’s Big Read spent the month of October celebrating Piecing Me Together and the themes it introduces. One of these events was Black to School: A Celebration of Albion’s Black Educators, where current and former Black educators shared their perspectives on students and the classroom.

“I do not view teaching as my occupation. I view it as my mission,” said Mae Ola Dunklin, former principal of Harrington Elementary School and current Albion College trustee, when addressing the audience. Roberts says of the event, “I suspect that if Jade had gone to a school with Black educators like those we celebrated at Black to School, she would have been seen and heard and her experience would have been different and better.”

The Big Read wound down with a final celebration on October 25. Each student leader was recognized, and New York Times bestselling author Ashley C. Ford spoke about her experiences growing up as a young Black woman. She spoke of struggling to fit in, and finding her calling. Ford encouraged the student leaders to find their voices, to speak up for themselves and advocate for what is right—just as Jade had to do:

“But at least he knows how I feel,” Jade thinks, after having a difficult conversation with a teacher. “At least I spoke up.”

In Piecing Me Together, Jade doubts her speaking up will change anything for the better, but to her surprise, it does.

That is the message this year’s Big Read students received: your voice has power. Don’t be afraid to use it. And throughout the program it was clear the student leaders took that message to heart, and are making their voices heard.