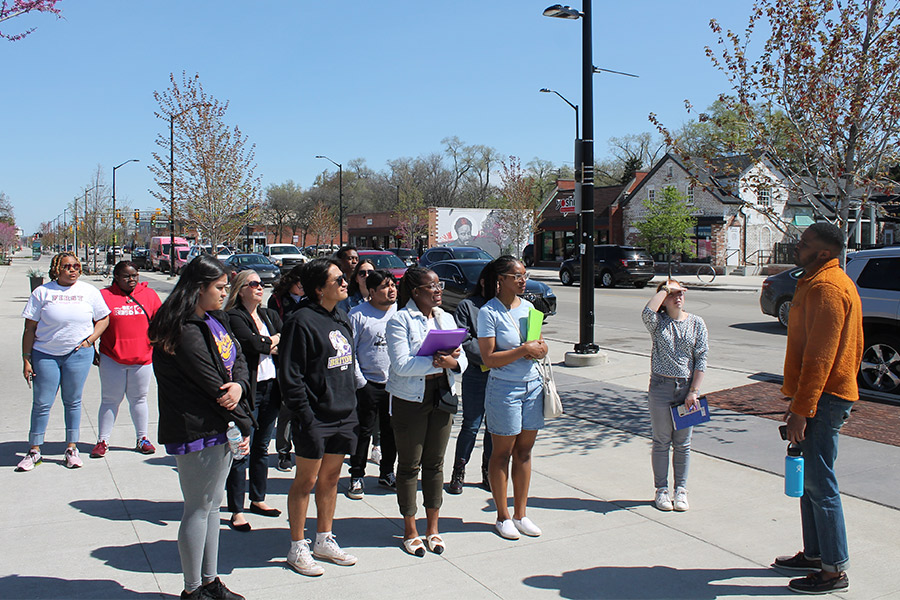 Sleight Program students opened their trip with a tour of Detroit by the City Institute. Here, they learn about the Livernois Avenue of Fashion before heading into Narrow Way Cafe. 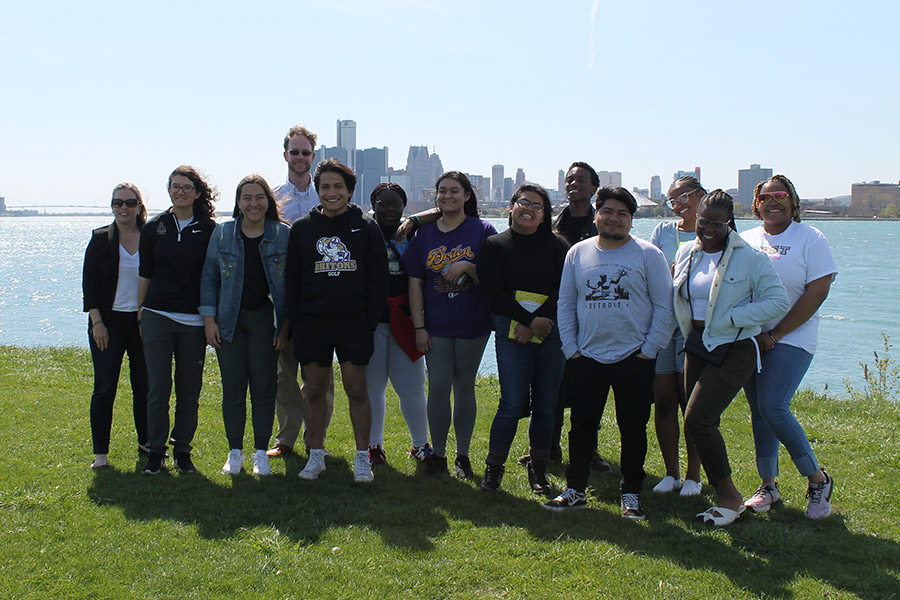 Later, the tour stopped at Belle Isle; in the background, the Detroit skyline is directly behind the group and to the right, with Canada to the left. 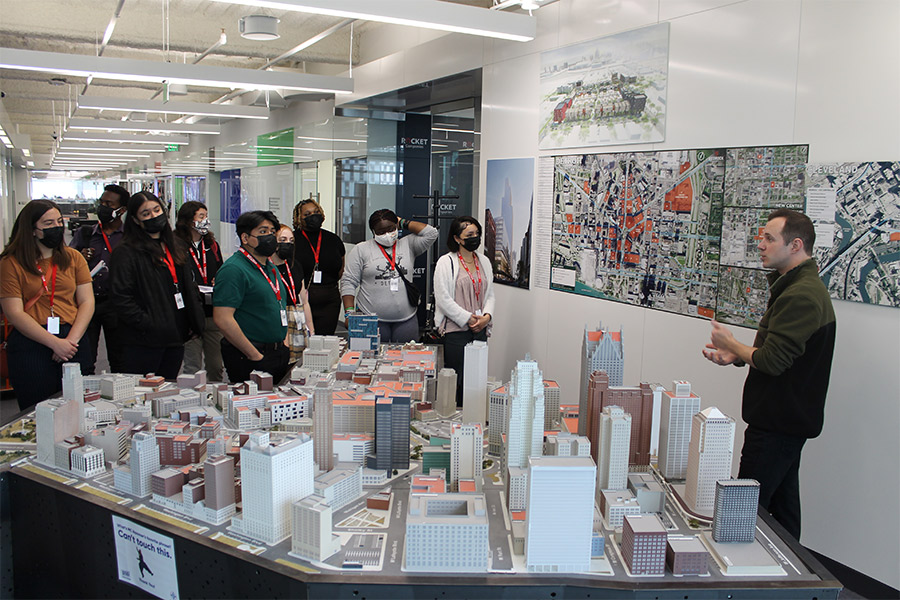 During their Opportunity Detroit tour the next day, trip participants received a walking tour of downtown properties in the Rock Ventures family of companies. 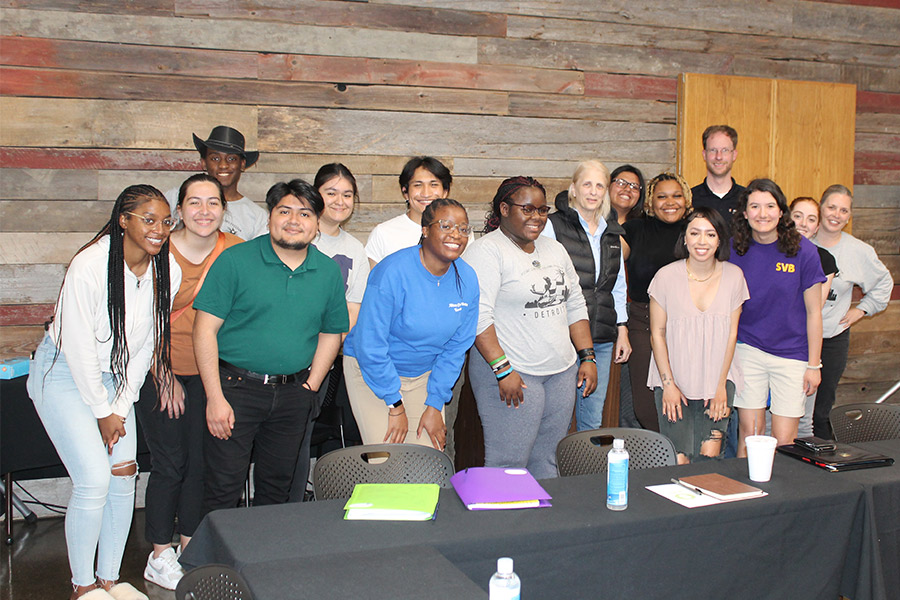 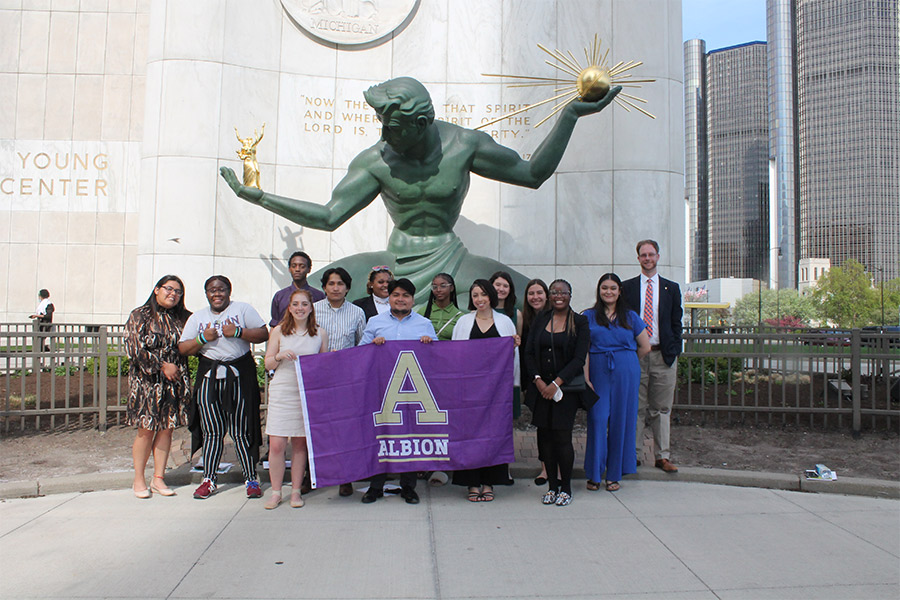 Wednesday included a visit to Detroit City Hall to hear from Dr. Sheryl Mitchell Theriot, parliamentarian and policy analyst for the Detroit City Council (and former Albion city manager). Afterward, the group posed for a picture in front of the iconic Spirit of Detroit statue. 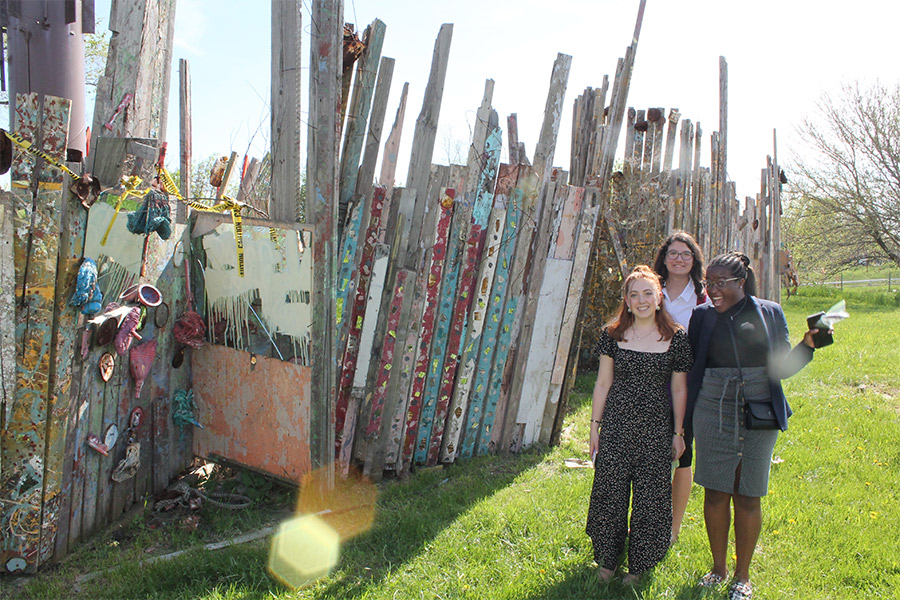 Thursday featured a visit to the Dabls Mbad African Bead Museum, which included exploring the artwork that surrounds the facility.

“For me, the trip was amazing,” says political science and history major Emily Abramczyk, ’24, of her recent Sleight Leadership Fellows Program experience in Detroit. “Through the Sleight trip, I spent a week with other Albion College students learning about the importance of leadership and public policy implementations helping to revitalize the city,” she says.

The trip is planned and led by the College’s Gerald R. Ford Institute for Leadership in Public Policy and Service. And for Carlos Paniagua Emiliano, ’23, an integrated marketing communication major, “The experience was unlike any trip I’ve taken anywhere in recent time,” he says. “We had an opportunity to immerse ourselves into the city, meet community leaders from multiple nonprofits doing work that puts the residents of Detroit first.”

“It was a great experience to meet with accomplished leaders of nonprofits and some for-profits, to learn about the impacts that they have had on the city and also hear about their insights about how to be a leader,” Abramczyk adds.

The Sleight trip is a weeklong visit to Detroit that accompanies a class, primarily for students with sophomore status. The trip is intended to teach students leadership skills in a practical setting. It is funded through a gift from the Sleight family, Justin Sleight, ’43, and his late wife, Marjorie Wardell Sleight, ’43; Justin’s late brother Norman Sleight, ’40, and his wife, the late Alethea Sleight.

The trip typically takes place in January, but this year it was delayed until May due to a COVID-19 surge. Eddie Visco, the course instructor and executive director of the Ford Institute, says, “It’s a course where you don’t really sit down and say, ‘This is what you need to do to be a leader,’ but [instead] we go and tour the community, so students see the qualities and characteristics needed to become strong leaders to be able to impact their community.”

During the trip, Visco says, “We talk to business leaders, nonprofit leaders; we talk to governmental leaders, and just explore the community and see what’s going on in Detroit and see what’s really happening, because you don’t get the full story about Detroit if you just read the headlines.”

To prepare for the trip, students spent the spring semester learning grant writing skills by crafting mock grants for real nonprofits in Detroit that they learned about in class. During the trip, students met with leaders of the nonprofits they had been studying. Abramczyk says, “My favorite part of the trip was getting to meet with fascinating nonprofits that are doing incredible work to help the people and the city of Detroit.”

“We’ve been very fortunate to have a great partnership with The Kresge Foundation,” Visco explains, “and so we had another staff member come and talk to our students a little bit. We’ve also had another alum who runs a nonprofit called Stream for a Cause work with our students this semester.”

Visco points out that the 12 students in the program have varying degrees of experience with Detroit. “We have students who have lived in Detroit their entire lives, to students who maybe they’ve been to a couple of Tigers or Pistons games or seen some concerts, to students who have never set foot in the city of Detroit,” he says. “And I think each student who goes, no matter what their interaction was with the community before this, they learn something about the city.”

Abramczyk found new ways to approach a familiar place. “Even though I live only an hour away from Detroit, this experience gave me new perspectives on the city, as well as provided me with new insights on beneficial programs that could be implemented into other cities, such as Albion, to help them improve,” she says.

That is exactly the reaction Visco hopes for. He says the students who participate in the program “have a thirst for not only knowledge, but also for making an impact in their community, whether it’s their home communities or their adopted community of Albion.” He says that “All of our speakers were very complimentary of our students and how inquisitive they were, the great questions they had. The students’ passion for learning how to be a leader and make a strong impact in the community is what makes this week successful.”

To be eligible for the class and trip, students must be nominated by a faculty or staff member. Abramczyk was excited to be nominated because, she says, “I wanted to go on this trip because it seemed like an excellent opportunity to improve my leadership skills and push myself academically.”

Abramczyk was especially interested in learning more about Detroit. “I also wanted to attend this trip so that I could change the way I think about the city of Detroit,” she says. “Due to past issues, such as the Race Riots of 1967 and the city’s bankruptcy in 2013, the area has been often viewed in a negative light, so this trip was beneficial to see the hope for the city’s revitalization and the massive improvements — such as the development of the beautiful RiverWalk, business developments, and nonprofits helping with education and poverty issues — that are taking place to turn the city around.”

Emiliano was interested in learning about race relations in Detroit as well. “We learned the history of Detroit and even had much-needed tough discussions about race and how it played a role in policies put in place to hurt Black communities,” he says.

Abramczyk says she is grateful to the trip’s organizers: Visco; Dr. Carrie Booth Walling, professor of political science and faculty director of the Ford Institute; and Donte’ Hopkins, culture and capacity coordinator for the School for Public Purpose and Professional Advancement. She also credits the leaders who met with the class to talk about leadership and revitalization efforts in Detroit, and her classmates, for making the trip special.

Emiliano agrees that the cohort was part of what made the trip meaningful to him. “I think the Sleight Program wouldn’t work if the students aren’t engaged, but they were extremely eager to participate,” he says.

Visco says this engagement is evident to him as well, coming through clearly in post-trip evaluations. “Students really seem to find value in this trip,” he says. “I’ve had students in the past say that they are thinking about different career paths now, after they’ve been able to explore so much. I’ve had people say after this trip that they’re rethinking where they want to relocate after Albion.”

The trip, for many, is life-changing. “I’d say it’s a very impactful experience on the participants,” Visco says.