“I never had any animals growing up,” said Perreault, who majored in theatre and sociology at Albion.

“I am allergic to cats,” said Miele with a smile as she looked across the room at several of her furry clients who are doing what cats do best — sleeping in the afternoon sun.

But Perreault and Miele are earning their “cat lady” credentials with a unique “tale” of friendship that helped create the Detroit Community Cat Rescue.

Tucked away near the end of Ward Avenue in an older neighborhood of the city is a small, unassuming bungalow-style, three-bedroom home.

Cats and kittens with names such as Mud, Crush, Eightball, Boxi, Penguin, Panda and Gary Cooper call it home.

“I am a bit of an old soul,” laughs Perreault as she introduces all of her tenants. By the way, Gary Cooper got his name because he looks like he is wearing a tuxedo.

The rescue stories are as varied and unique as the names of the cats. One cat had been found in an abandoned house after almost a month and was not in good shape. Another cat was brought to the Rescue by a woman who had saved it only to realize the cat was ready to give birth and could not take on a whole litter.

Perreault’s first cat rescue came in 2015 while she was at Albion College.

“I was walking home from a get-together one night with some friends and this white- and gray- striped tabby cat started following us down the train tracks,” Perreault said. “A friend of mine took the cat in but could not keep it. He asked if I wanted it because I lived off campus. I just could not say no. His name was Santiago.”

Following Her Own Path

After graduation from Albion and a brief career in professional theatre, Perreault found herself in caregiving and wondering what to do with her degree.

“I was working with people, some of whom had pets. I did better with the pets so I went in that direction,” said Perreault, who has a full-time job with an emergency animal care facility.

As she continued to rescue cats, Perreault met and learned a lot from three different “cat ladies.”

“They taught me everything because they had done and seen it all. They taught me how to catch and release and how to do things the right way,” Perreault said.

“This is my passion job,” she said of the Rescue.

Miele connected with Perreault in a similar fashion as Santiago. While she did not follow Perreault home, Miele did start following Perreault’s social media posts about cats, which led to the partnership and a permanent home for Perreault’s rescue efforts.

“I am a CPA (certified public accountant) and love my work, but I have always been interested in nonprofits,” said Miele. “We were acquaintances in college and hung out with some of the same people, but we were not close,” Miele said of Perreault. “When I saw the cat posts, I called her and asked if there was anything I could do to help.”

As it turns out, Miele helped out a lot more than keeping the books in order and making sure all of the paperwork is complete and correct.

The house that serves as the Rescue actually is owned by Miele and her partner, who live across the street. They had been renting the house but grew tired of the issues that come with being landlords.

“We had renovated the house and were trying to find a use for it,” said Miele. “When I spoke to Marie, she mentioned she wanted to start a rescue but could not find a facility. It just worked.”

“We applied for our license in November of 2021 and in May of 2022 we became official,” said Perreault with a big smile. “We are the only licensed brick-and-mortar shelter within the city limits of Detroit. We are a 501(c)(3) nonprofit organization.”

But Perreault is quick to point out that while the Rescue carries the Detroit name, it does not receive any public funds. It is solely operated by donations.

“All of our budget comes from fundraising,” Perreault said.

“We have to base our intake on the funds we have to work with,” said Miele. “We do not have a buffer that allows us to exceed a certain number of cats.” 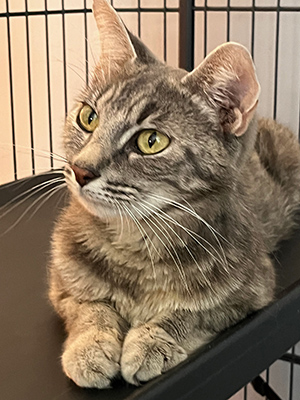 Mama Crush is among the cats currently being cared for at Detroit Community Cat Rescue.

Miele said the current number of cats that have been adopted through the Rescue this year is 50. They want to help as many as possible and have set a minimum adoption goal of 100 cats. The Rescue helps hundreds of other cats, mostly feral, with programs that trap, neuter and release.

According to one estimate, the current number of homeless cats in Detroit is about 650,000, almost the population of people in Detroit.

The phone at the Rescue rings about 40-60 times a day, Perreault estimated.

The bottom line for Perreault and Miele is not a number, though. It is helping animals and the community.

“This is about love of animals and love of the community and making an impact,” said Perrault.

The Power of Community

Both Perreault and Miele say that Albion College continues to play an important role in their success.

The Albion impact began while they were still in school.

“I came at it from the business perspective,” said Miele. “I think Albion helped me a lot and I became more passionate.”

That sense of community has continued with contributions to the Rescue.

“There have been tons of Albionites who have donated to us at a high level,” Perreault said. “They come out of the woodwork. They love cats and they want to help.”

Supporters of the Detroit Community Cat Rescue will have another opportunity to help Perreault and Miele.

The Rescue has been chosen as one of the Detroit nonprofits to participate in the Rocket Companies Community Challenge, which began Aug. 1.

The Rocket Companies Community Challenge is a month-long fundraising competition featuring hundreds of nonprofits across the nation. The goal is to help nonprofits raise as much money as possible for their respective causes. Those that raise the most will receive grand-prize donations from Rocket Companies. Last year, participating nonprofits raised more than $1.3 million.

The Detroit Community Cat Rescue page of the Challenge is up and running. In the meantime, Perreault, Miele and their volunteers will continue to do what they can to help Detroit cats.

Perreault and Miele, who now wear their “cat lady” status as a badge of honor, still get a little sad when one of their furry feline friends gets adopted.

“It’s hard, but it is harder to ignore the problem,” said Perreault. “I know the love we give them will stay with them. It’s like with teachers: they give their students the tools they need, and they send them out into the world, and the world becomes a better place.”