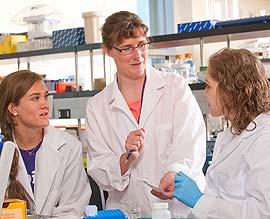 One of the great benefits of attending a small college such as Albion is the ability to work closely with faculty members in the classroom and laboratory. This opportunity is evident in course work, but also exists in independent student research projects conducted under faculty supervision. The Department of Biology at Albion has a long history of undergraduate student research that has led to presentations and/or publication in scientific journals. As a student you are encouraged to seek out a faculty member whose research interests most closely match your own, and to conduct a research project under her/his direction.

Dr. Roger Albertson is a cell and developmental biologist who investigates one of the most fundamental processes of life: cell division. Proper cell division is essential for development of an organism and has particular relevance in cancer and stem cell biology. Dr. Albertson’s interests lie primarily in two aspects of cell division: 1) how cells coordinate cleavage furrow invagination with vesicle transport and 2) how asymmetric cell divisions specify the fates of mother / daughter progeny.

Cytokinesis relies on a contractile ring that drives plasma membrane invagination from the cell cortex. Recent studies have revealed that vesicle trafficking is also important for cytokinesis. This insight has raised new and exciting avenues of research: what are the sources of vesicles, how vesicle transport to cleavage furrows is regulated, and whether vesicles deliver proteins required for cytokinesis. Dr. Albertson has recently addressed these issues by conducting a genome-wide screen in the fruitfly, Drosophila, that revealed several new genes involved in cytokinesis. Current and future research goals include mapping these genes and characterizing their function using genetic and molecular approaches.

A second area of interest lies in factors that influence cell fate specification. During Drosophila development, neuronal stem cells undergo asymmetric cell divisions that yield daughter cells with unique fates. A recent study has indicated that a Drosophila strain infected with the bacterium Wolbachia are unable to properly specify neuronal cell fates. Yet, how Wolbachia influences cell fate determination at a cellular level is a complete mystery. Genetic, molecular, and cellular approaches will be used to monitor subcellular Wolbachia localization and to identify which cellular pathways the bacteria affect. Wolbachia is the pathogen that causes African River Blindness in humans. Thus, in addition to learning about Drosophila development, these studies will further our understanding of host-pathogen interactions at a cellular level.

Dr. Sheila Lyons-Sobaski is an ecologist whose research utilizes both field and molecular genetic techniques to investigate the ecology and evolution of plant populations. In particular, she is interested in how gene flow maintains genetic variation within isolated plant populations to better understand the ecological patterns and evolutionary processes which structure them. Her research was a comprehensive study of gene flow and its influence on the genetic structuring of a regionally-endangered annual plant, Sabatia campestris (Gentianaceae). Her research is important because, at the level of an individual, she empirically demonstrated the significance of the soil seed bank in conserving genetic variation over time. In addition to studies of local gene movement, she has explored regional genetic differences for S. campestris by comparing peripheral populations, those located at the edge of a species range, with centrally located populations where the species is common. Her future research plans include further studies in the molecular ecology and gene flow of regionally endangered species.

Dr. Ola Olapade is primarily a microbial ecologist/microbiologist interested in the delineation of microbial community composition and structure, especially those in biofilms in various aquatic systems such as lakes, streams, and rivers. He currently employs both standard microbiological and molecular techniques to examine and describe the abundance and distribution of various bacterial populations in response to changes in hydrodynamics, seasonality, nutrient and organic C availability, as well as predation in freshwater environments. Apart from his interest in taxonomic diversity, he is presently exploring diversity amongst various functional groups as well as their enzymatic activities. 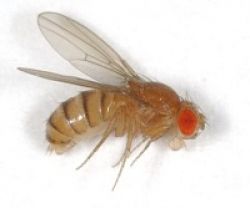 Dr. Brad Rabquer is a molecular and cellular physiologist interested in human inflammatory and angiogenic diseases. Inflammation and angiogenesis play key roles in the pathogenesis of many cancers, and in autoimmune diseases, such as rheumatoid arthritis (RA) and systemic sclerosis (SSc). State-of-the-art therapies for select cancers and RA target angiogenesis and inflammation, respectively. However, while these treatments have shown to be effective, many patients do not respond adequately to them. Therefore, more research is needed to understand the pathological basis of inflammation and angiogenesis.

The first aspect of Dr. Rabquer’s research focuses on angiogenesis, the formation of new blood vessels from pre-existing vessels. He is interested in determining the role of a novel family of soluble adhesion molecules, junctional adhesion molecules (JAMs), in mediating facets of angiogenesis. For these studies, Dr. Rabquer employs a number of cell and molecular biology approaches including quantitative PCR, Western blotting, enzyme-linked immunosorbent assays (ELISAs), and cell culture techniques. In addition, Dr. Rabquer is studying how the upregulation of angiogenic chemokines affects the development of blood vessels in patients with SSc. As SSc progresses, a loss of arteries and capillaries is observed in many organs, including the skin. However, despite the loss of vasculature, compensatory angiogenesis is dysregulated and does not occur normally. Various studies have demonstrated a paradoxical increase in proangiogenic molecules in both the skin and serum of patients with SSc. Dr. Rabquer’s research will attempt to explain how the overexpression of these angiogenic factors affects microvascular endothelial cells in SSc skin.

The second aspect of Dr. Rabquer’s research focuses on the role of monocytes in inflammation. He is interested in determining the role of soluble JAMs (sJAMs) in monocyte migration. To date, he has found that these molecules are upregulated in the synovial fluid (joint fluid) of patients with RA and therefore may play a role in inflammation. For these studies, Dr. Rabquer employs a number of cell and molecular biology approaches including quantitative PCR, Western blotting, enzyme-linked immunosorbent assays (ELISAs), and cell culture techniques including chemotaxis assays.

Dr. Ken Saville is a geneticist and molecular biologist whose primary research interests are transposable elements and DNA repair, using the fruit fly Drosophila melanogaster as a model system. Transposable elements are discrete segments of DNA with the ability to “jump” into and out of chromosomes. Dr. Saville’s research is primarily focused on a particular genetic element called hobo. When hobo jumps out of (excises from) a chromosome it causes a particular type of DNA damage- a double strand DNA break, sealed at the end with a hairpin loop structure. This damaged DNA must be repaired by the normal cellular DNA repair machinery in order to maintain genomic integrity. There are two main mechanisms for repairing double strand breaks in DNA: Homologous recombination and non-homologous end-joining (NHEJ). Under certain conditions it appears that hobo generated damage is repaired with a strong preference for the NHEJ pathway, Similar DNA damage and repair processes are involved in the formation of antibodies and other important molecules in vertebrate immune cells. Failure to repair this type of damage in mammalian cells leads to severe combined immune deficiency (SCID) and a high susceptibility to cancer. The goal of Dr. Saville’s research is to develop hobo excision as a unique model of DNA damage and repair and to ultimately apply the knowledge learned from this system to a further understanding of similar processes in mammalian cells, particularly those processes that, when compromised, lead to increased cancer susceptibility in humans. This work has been supported by a grant from the National Cancer Institute (NCI) of the National Institutes of Health (NIH) and has been the source of research projects for more than twenty Albion students over the past several years.

A second area of interest is the basic genetic processes that control animal development. In this area, Dr. Saville has studied a gene essential for Drosophila development. This work revealed that the protein, now called pros26, encoded by this gene is a subunit of the Drosophila proteasome, which is essential for the degradation of cellular proteins via the ubiquitin/proteasome pathway. The relationship of this function to development remains a mystery, however similar genes are present in virtually all organisms, suggesting their fundamental significance in biology. Recently, a second mutation was identified by genetic interaction with the a mutant allele of pros26, and its protein, too was shown to be a proteasome subunit. This research relates to Dr. Saville’s overall interest in cancer in that proteasomes have been shown to be an effective drug target for the treatment of multiple myeloma.

Finally, Dr. Saville has also collaborated with Albion Professor Dr. Jeff Carrier to apply molecular techniques to the analysis of nurse shark mating behavior. This work led to the discovery of multiple paternity in nurse sharks and publications with Albion student co-authors.

Dr. Doug White is an ecologist whose research focuses on coevolutionary interactions between fruit-eating animals, particularly birds, and fleshy- fruited plants. He has studied the nutritional composition and physical characteristics of temperate and tropical fruits, avian feeding preferrences, seasonal patterns of fruit use, interactions between feeding capacities of birds and fruit size, and patterns of avian seed deposition. His other research interests are (1) avian population biology including studies of interspecific competition and nesting microclimate in cavity-nesting birds, (2) ptilochronology, using feather growth rates to assess nutritional status in birds, and (3) evaluation and conservation of remnants of native forest which are jeopardized by development. Outside biology, Dr. White enjoys building reproductions of Shaker furniture.

Dr. Abigail Cahill’s research interests center around evolutionary ecology of early life stages of marine species. She is interested in questions relating dispersal of marine invertebrates to other ecological and evolutionary processes, especially how dispersal type can influence local adaptation to temperature regimes and ultimately how these species may or may not evolve in response to global climate change. She is also interested in how marine invertebrate population dynamics are driven by recruitment and subsequent survival, and how these crucial processes are affected by environmental, phenotypic, and genetic variation. Answering these questions involves labwork using molecular methods, as well as lab and fieldwork with live organisms. At Albion, she will be branching out into freshwater invertebrate systems to ask some of these same questions regarding connectivity, dispersal, and life history.