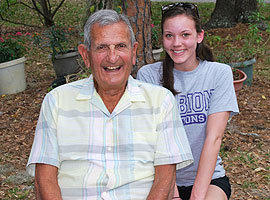 Elkin “Ike” Isaac, ’48, with 2010 Symposium presenter Rachel Leads, ’10. “Meeting Ike Isaac was such a rewarding experience. His continuing dedication to the College and his regard for Albion students is truly inspiring,” Leads said. “I feel honored that I can take part in the Elkin Isaac Student Research Symposium, which honors such a great man.” (Photo:Vanessa McCaffrey)

The Elkin R. Isaac Endowed Lectureship was created in 1991 by Albion College alumni in honor of their former teacher, coach and mentor, Elkin R. “Ike” Isaac, ’48. Isaac taught at Albion from 1952 to 1975 and coached basketball, track and cross country. He led his teams to one Michigan Intercollegiate Athletic Association basketball title, six consecutive league championships in track, and three cross country championships. He also served as the College’s athletic director and created Albion’s “Earn, Learn and Play” program and the “Albion Adventure Program.” In 1975, Isaac became athletic director at the University of the Pacific and retired from there in 1984.

Reflecting Isaac’s lifelong interests in higher education and research, proceeds from the endowment are used to bring a noted scholar to campus each year to offer the Isaac Lecture and to visit with classes. In 1997, the Isaac Lectureship was expanded and is now associated with Albion College’s annual Student Research Symposium, featuring presentations by students recommended by their faculty sponsors for outstanding independent study and research. The symposium now bears Isaac’s name.