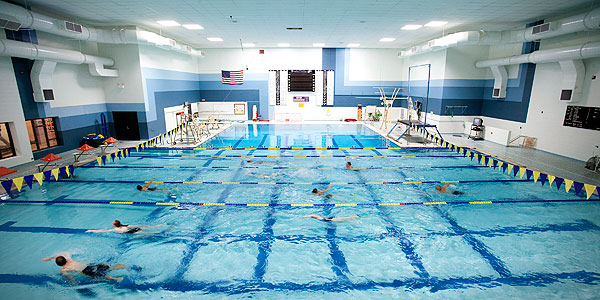 As of Saturday, October 3, all athletic facilities are temporarily closed.

Open swim hours for current Albion College students, faculty and staff ONLY are as follows:

The projected cost of the project was $850,000 and was funded largely by money donated by the S.S. Kresge Foundation and individual donors. By the beginning of the following school year, most of the work was done and the facility was opened. For decades, the Albion College swimming and diving teams called the pool in Kresge Gymnasium home. By the 1970s, however, the College realized it was time for a new pool to be built. Plans for the new facility began in 1975 during the construction of Sprankle-Sprandle Stadium. The final location of the building was determined in April of 1977 and construction began later that summer. It was decided that the facility would be named in honor of W. Clark Dean, a long-time Albion College trustee and benefactor. Dean was partly responsible for raising money for the construction of Sprankle-Sprandel Stadium, to which the pool would later be attached.

The facility’s highlight is the T-shaped pool, 25 yards by 25 meters. The shallow end of the pool has a depth of just over four feet, while the deep end of the pool measures 14 feet deep. The deep end houses two one-meter diving boards and one three meter board. The pool was updated with new starting blocks, diving boards, and lane markers in 1991. The diving boards are made by Duraflex and comply with NCAA regulations.

In 1997, a new A six-lane IST scoreboard was installed on the far wall, giving spectators constant updates of scoring throughout meets. Three years ago, diving training on the one and three-meter boards was enhanced with the addition of a trampoline with a spotting rig for divers. An in-deck, eight person hot tub was added in 2000, and a state-of-the art ventilation system was added this past summer.

A unique feature of the pool is the underwater observatory windows, which allow coaches and spectators a chance to monitor swimmers and divers from below the water’s surface. The room is located just below the three meter board and has three large viewing windows. Two of the windows face the deep end of the pool, while the third window faces the shallow end along the east wall of the pool. This allows close-up viewing of flipturns or of the finish line for races.

At deck level sits the locker rooms, coaches’ office, and an open classroom. Locker room facilities include restrooms, showers, and plenty of locker space. The coaches’ office features a large window so the pool can be monitored at all times. The classroom can be used for instructional use or for team meetings. Up above, the stands feature seating for approximately 250 spectators and has a Plexiglas railing to allow a full view of the pool below.

In 1988, the Dow Recreation and Wellness Center was erected surrounding the facility. Included in the facility are a weight room with fitness equipment, training and rehabilitation areas, a classroom, locker rooms and the Department of Physical Education offices. The building’s Bernard T. Lomas Fieldhouse contains flexible court space for intramural basketball, volleyball, badminton and tennis as well as a 1/9-mile track and two racquetball courts. The building was made possible by a gift from the Herbert H. and Grace A. Dow Foundation. The Fieldhouse is named for Dr. Bernard T. Lomas, president of the College, 1970-1983.