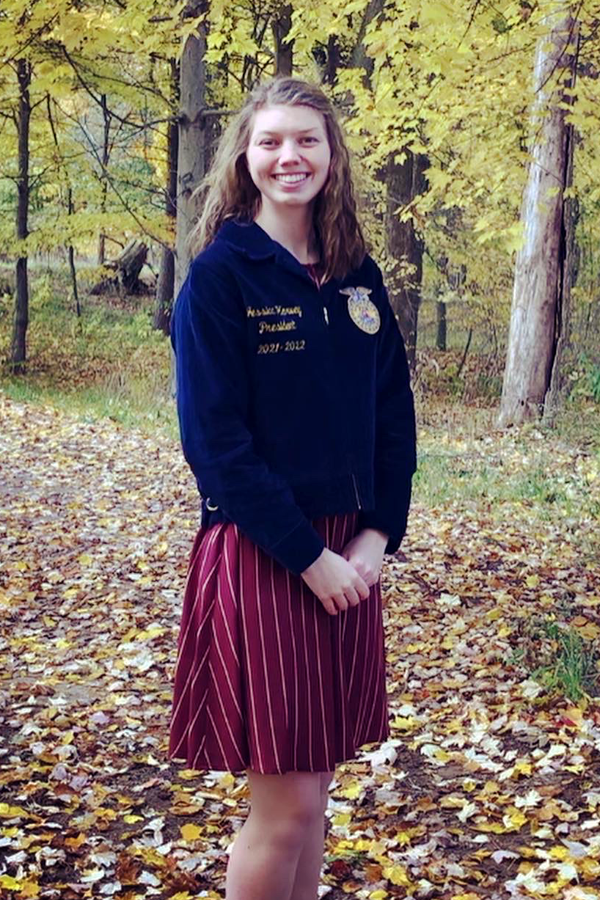 Jessica Harvey’s parents assuredly instructed their daughter not to talk to strangers when she was growing up in rural Hamilton, Michigan, near Holland.

Of course, she knew what her parents meant, but it has not prevented her from speaking to strangers wherever she goes.

Her ability, and passion, for talking to people has grown and landed her on the stage of the national convention of the Future Farmers of America (FFA) where she will compete in the leadership competition Oct. 26-29 at Lucas Oil Stadium in Indianapolis.

As the winner of January’s Michigan FFA state competition in prepared speaking, Harvey will compete against 50 other state representatives at the national level.

“If I win, I get bragging rights and a pin for my jacket,” said Harvey, who is a member of Albion College’s Wilson Institute. “So really I am doing this because I love it through and through. The pin is the exact same pin I got for winning state, it just says “national” on it.”

And when she is done with her speech, she must answer questions from judges about her topic — the use of supplements in cattle to help decrease the amount of methane they produce, thus helping reduce global warming.

It’s an intimidating process and Harvey will have to give her speech at least three times at the national level to become champion, but she is “chill” about all of that.

“It’s waiting for the results to come back that I can’t stand,” she said. “I cannot eat or think or do homework while I am waiting to hear how I did. And that can take hours.”

For everything leading up to her presentation, Harvey said she just does what she does best — talk to people.

“All of the contestants are put in a room without their phones or any technology,” said Harvey. “I will just start talking to everyone about something not related to anything or get them all to sing a song. It always works because they want to clear their minds and not think about their speeches.”

Harvey, who aspires to become a veterinarian in the future, will complete her FFA tenure after the convention in Indianapolis, but said that she will remain involved through mentoring younger members with public speaking.