Albion College Dance Team: In Step for 25 Years and Counting

From its origins as the Briton Rhythm Squad in the mid-1990s to today, alums and current members of the student organization line up for a reunion at Homecoming. 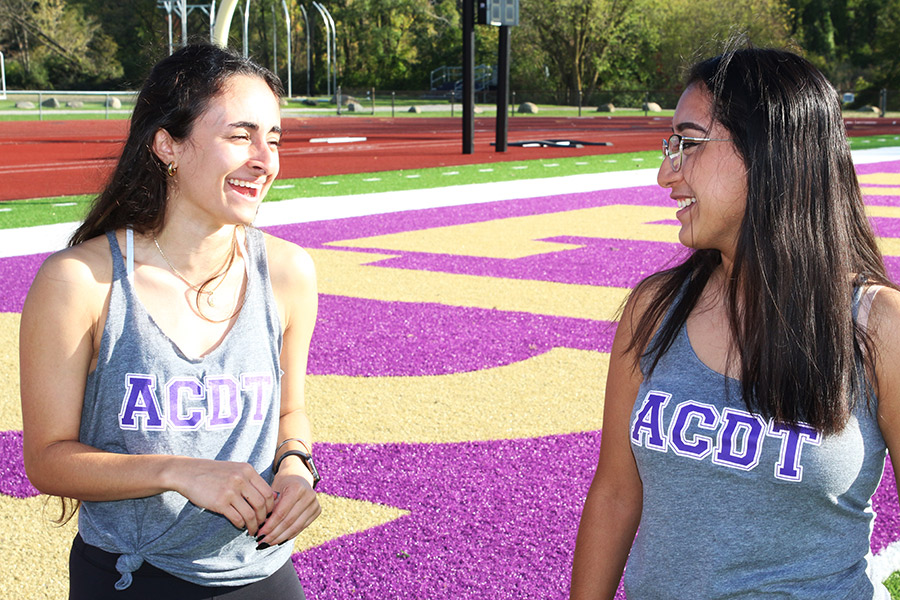 Music pumps through loudspeakers. Dancers leap and twirl across the ball court. The crowd cheers as one dancer flips across the floor in dance-inspired gymnastics. This is the Albion College Dance Team, performing at halftime.

The Albion College Dance Team, formerly the Briton Rhythm Squad, is celebrating its 25th anniversary this year. At the team’s reunion during Homecoming on October 23, current members and alums performed choreography together during the football pregame festivities. (Watch video of the performance.) The Physics Department’s Dr. Nicolle Zellner, Herbert H. & Grace A. Dow Trustees’ Professor in the Sciences and the team’s advisor, also joined the group.

The Dance Team is a noncompetitive, student-run organization for students who want to continue dancing in college. Zellner has advised the team since 2006 and says she views her role as supporting the dancers on the team and making sure “that all of the dancers are enjoying their time on the team.” She helps with tryouts and selecting team captains, but the student co-captains are the ones who run practices and create choreography.

Jessilynn Norcross, ’98, and Camille Billips, ’98, took the first steps toward creating the team in 1994. Norcross says she and Billips “were on the same hall in Wesley in the fall of 1994. When we didn’t find a dance squad to try out for at Briton Bash, we wondered if we could start one ourselves.”

The two students soon founded the Briton Rhythm Squad; its beginnings were far from glamorous.

“We had no funding, and one of our first money-raising activities was to go around and pick up returnable cans from the previous night’s party at various fraternities on campus,” says Norcross. “It was disgusting. But it raised us enough money for uniforms, and didn’t cut into our study hours during the week.”

With funding for the team secured, the Briton Rhythm Squad took off. The members were dedicated to their craft, but the work was rewarding, too. “It was hard, so you couldn’t think about your course load or anything else while you were memorizing the routines and practicing, making it the best mental break from classes and studying,” Norcross explains. Norcross and Billips remained dedicated to the squad, serving as co-captains and supervising the incoming captains in 1998, a requirement of their bylaws.

Norcross had a background in dance that she drew on as co-captain. “I’d been the captain of my pomponette squad in high school where lots of us wished we’d had a dance squad. Since our little rural town didn’t have anything like that, it was the best we could do,” she says. “I learned to take chances and built on the jazz, hip-hop and dance classes I’d had as a kid. It’s a lot different dancing with a group than by yourself, and I missed it a lot when I came to Albion.” The Briton Rhythm Squad filled that void for her and the other dancers on the squad.

Norcross fondly remembers technical difficulties that at the time were a hassle. “The music never worked when it was time to perform,” she says. “The technology of the late ’90s was pretty ridiculous. We were still using mix tapes, and I’m 99 percent sure the guys put the tape in wrong at every halftime, so I had to run back there and fix it.”

Lots of fun memories are tied up in the Rhythm Squad. Norcross remembers one particularly difficult practice. “I taught myself a section of an award-winning routine from a dance competition tape—yes, we still used VHS tapes in the 90s—that I never thought we’d learn. When we conquered it, after a crazy-long practice, we all jumped around laughing like sweaty idiots. It was great,” she says. Norcross says she still dances now, sometimes with her young daughter. “Zumba is my happy place,” she says. 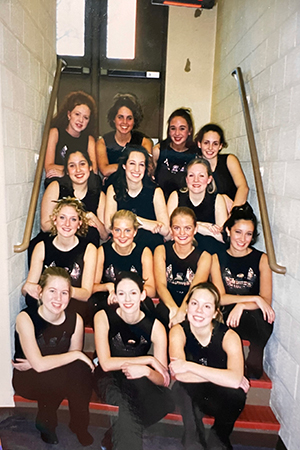 In the 2000s, the team transformed from the Briton Rhythm Squad to the Briton Dance Team to the Albion College Dance Team. Team captain Mandy Gove, ’04, remembers a shift in the type of dancing that was done as well. “Freshman year it was kind of casual, fun dancing, but by senior year then it turned very technical,” she says. “So there was a big change from the Rhythm Squad vibe to actual choreographed leaps and turns, more of the tech side of things. It was cool to see that change over the years.”

The Dance Team was a nice opportunity for students who wanted to continue dancing in College, even if they weren’t taking dance classes. The dancers took the team seriously and, Gove says, “I think we were able to elevate over time, and keep pushing and make things harder, and keep challenging ourselves.”

The dancers on the team were close, Gove says, and have kept in touch. “My co-captain, Brooke Reich-Lucas, ’03, delivered my daughter,” she says. “That was a fun story, that she ended up being our OB.” And that isn’t the only family connection Gove has with the Dance Team. “We did a couples dance, and I have pictures of me dancing with my now husband in our uniforms,” she says. Even Albion’s president at the time, Dr. Peter Mitchell, did a routine with the team, a big hit with the crowd.

Ultimately, it was the other team members who made being on the team a valuable experience. “Really, the practices were just a lot of fun. Sometimes the group would all come together to make up parts of the dance if something wasn’t working out well,” Gove recalls. “It was just a really good vibe with the group, all different years, all different backgrounds, some were not at all involved in classic dancing but just loved to do it. It was a cool way to connect.”

When she watches the team perform now, Gove says, “I love watching the evolution of the uniforms.” She remembers her team hand-making their uniforms and how it added to their overall bonding. “I remember us using some sort of tool to put rhinestones on our costumes one by one,” Gove says. “Everyone worked really hard, everyone really cared.”

Gina Delgado, ’04, was also on the team in the 2000s. She was a competitive figure skater before coming to Albion, and wanted an outlet to enjoy dance while at college. “Freshman year my closest friends would always have dance parties in our dorm room. We ended up seeing the flyer for tryouts and had a blast,” Delgado says.

She, too, appreciated the closeness of the team. “The team was the perfect mix of Alpha Chis, Thetas and Alpha Xi girls. We were all so close and looked forward to dancing and practicing all the time. It was our happy time.” Many of the team members still dance, and even for those who don’t, Delgado says, “when us Dance Team girls get together, there’s no doubt that we all still remember moves to our routines.” 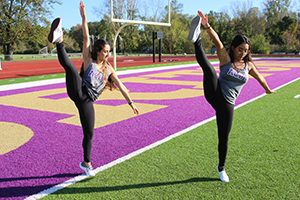 Urbanski and Espinoza warm up on Schmidt-Fraser Field days before the Dance Team’s Homecoming performance at Sprankle-Sprandel Stadium.

The team’s current co-captains are Jackie Espinosa, ’23, and Isabela Urbanski, ’22. Espinosa says she enjoys performing at the football and basketball games. “My favorite memory was my first football dance performance freshman year. It was right before we danced when it hit me that I was in an actual college dance team. I never had thought that I would keep dancing after high school, so realizing that made me happy because I knew I could keep doing what I love to do just for a bit longer,” she says.

Urbanski relishes the rush of a performance as well. “I love the feeling of the crowd cheering for us as we perform,” she says. Being team leaders has been lots of work for Espinosa and Urbanski, but they have used the opportunity to learn and grow. Urbanski says she wants all the dancers on the team to enjoy themselves. “I include them in making up routines and ideas for the team so they feel included,” she says. “As a leader, I strive to be the best captain I can be by listening to the girls and taking in their suggestions and implementing them.”

Espinosa agrees. “If someone struggles with doing a certain part of the dance,” she says, “I can be able to help them by hearing their thoughts on how they are struggling and I can come up with a solution or certain technique to help them get better.”

Dr. Zellner, the team’s advisor, is continually impressed by the group. “The team members work together to choreograph and perform entertaining dance routines. The dancers are respectful; they are good students; and they are great ambassadors for Albion College,” she says. “I have always found the team to be a class act every single year. I am so proud of what they do every season.”