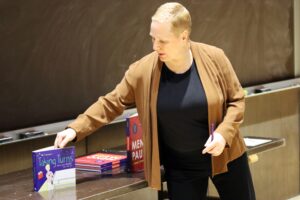 Czerwiec opened her talk by saying, “In comics, we love origin stories, right? And so I thought I’d start with my origin story.” She described starting out as a nurse in her 20s working in the AIDS unit in a Chicago hospital. “I was really overwhelmed, because it was the peak of death from AIDS, and I barely even knew how to read a patient’s chart. Like a fish out of water trying to learn how to fly as a nurse, let alone then face this crisis,” she said.

After the death of a favorite patient, Czerwiec realized that to be able to function at work, she needed to figure out “How I can be present for my patients and not be caught up in my own grieving. I mean, you can’t call in grief-stricken.” She turned to comics that day, drawing a quick set of images expressing her emotions. As Czerwiec continued to work in the medical field and process the joy and despair of nursing, the dependence on comics to cope remained.

Now, as an educator, Czerwiec finds comics to be an excellent teaching tool. They help convey “a high density of information” in a small space, and they also help to sensitively and poignantly tackle difficult issues. Though not all comics are funny, even serious comics “can help us laugh at things that are scary, which helps us cope.”

The keynote was the last event of Women’s History Month, and according to organizer Krista Quesenberry, Czerwiec was invited because her research tied in with the month’s theme of “Providing Healing, Promoting Hope.” A new theme is chosen every year by the National Women’s History Alliance.

Czerwiec was a good fit for the theme and for Albion, because, “We have the Wilson Institute [at the College], and so many students in STEM fields who are interested in medicine,” Quesenberry says. “But we’re a liberal arts college, and Czerwiec’s here to talk about art, and narrative and drawing as a way to work through some of those concerns in the medical field, and I just thought there’d be a lot of people in our community who’d really be interested in her.”

The event was sponsored by the Women’s, Gender, and Sexuality Studies Committee, as well as the English, Art and Art History, and Biology Departments, the Prentiss M. Brown Honors Program, the Anna Howard Shaw Center for Gender Equity, and the Lisa and James Wilson Institute for Medicine.