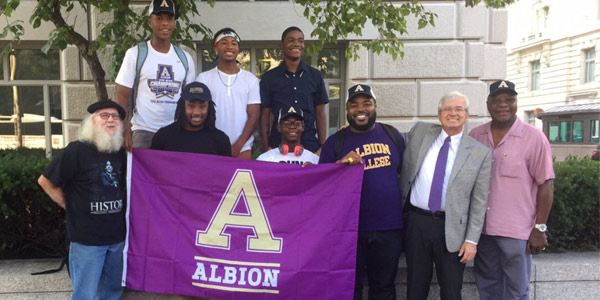 For Keena Williams, ’09, two images will likely stay with her forever after a whirlwind visit Sunday through the new Smithsonian National Museum of African American History and Culture in Washington, D.C.

“The first was when you got to the bottom of the museum (there are four floors above ground and three below). It’s darker and the ceiling is lower,” said Williams, Albion College’s director and president’s special advisor for global diversity. “I think it’s meant that way to replicate the hold of a slave ship. It took my breath away. You are surrounded by people and you couldn’t get away. You get the revelation that this is what it was like. That’s an experience in and of itself.”

The second image was walking into the exhibit that included the casket of Emmett Till, the 14-year-old African American who was lynched in 1955 in Mississippi for allegedly flirting with a white woman. “You felt you were in a procession line and you could hear Mahalia Jackson singing [in the background]. It was very jarring. You felt like you were in the moment. It was hard not to break down in that space.”

Images and sights and sounds and reflections. All of that reverberated with Williams and the group of 16 Albion College students, President Mauri Ditzler and several faculty and staff who joined another 30 or so members of the Albion chapter of the NAACP traveling to Washington last Friday for an opportunity to experience the opening of the long-awaited museum. 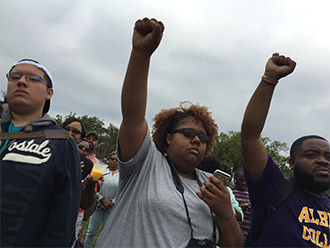 From left, students Raylan Grace, ’20, and Kalli Allen, ’19, and professor Dominick Quinney stand outside the museum.

Staying in the D.C. suburbs, the group toured Washington on Saturday but, due to the huge volume of visitors, only six from the Albion group managed to get into the museum for a two-hour tour on Sunday. They included Williams; longtime Albion history professor and civil rights activist Wesley Dick; Albion College ethnic studies assistant professor Dominick Quinney; Albion NAACP President Bob Dunklin; Emily Miller, ’17, editor of The Pleiad; and Deshante Allen, ’19.

The remainder continued their tour of D.C. and the group returned to Albion late Sunday night.

For Williams, it was all worthwhile.

“In a word: amazing,” she said. “The fact that in the midst of everything going on in our country and the talk about race and police shootings, to have those conversations every day and then to be able to go to that setting with brown and black and white faces in peace and support, it was an exhilarating feeling. Everyone had the space to breathe. For me, that was worth the trip.”

And though the museum—years in the planning, designing and, finally, construction—is a celebration of African American history and culture, Williams said it was an event that everyone celebrated.

She said the museum’s bottom floors designated the dim and disturbing past of slavery and the Jim Crow South, becoming a more joyous celebration of African Americans through the higher floors.

“They were the celebration of culture,” she said. “This is Black culture and this is where we’ve come in terms of education and religion and music and athletics. This is me. You leave after going to the top feeling exhilarated and excited. I felt validated as a person.”

And, perhaps most important, the museum and what it represented generated conversations between students, faculty and community members on the way home.

“The conversations on the bus were just as exhilarating as being on the [museum] grounds,” Williams said, adding that two hours inside the museum was nowhere near enough.