The Art of Math: Dr. David Reimann Explores the Possibilities 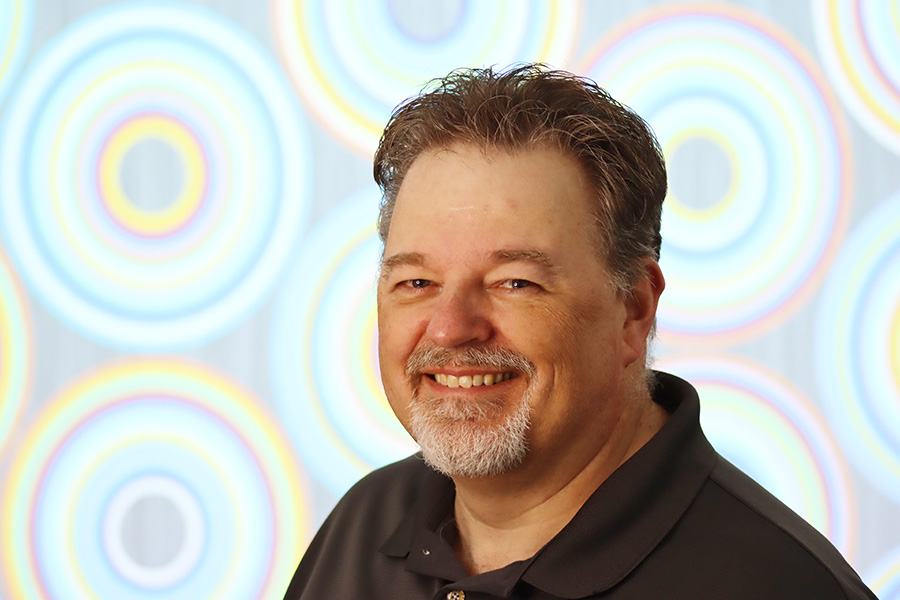 “Mathematics is universal. It’s everywhere,” says Dr. David Reimann when describing how he approaches his art. He joined the faculty of Albion College’s Department of Mathematics and Computer Science in 1996.

Math and art are two things that many people don’t readily associate with each other. That’s not the case for Dr. David Reimann, professor of mathematics and computer science. For him, math and art are intrinsically linked, and he has an award to prove it.

Reimann recently won the American Mathematical Society’s JMM Mathematical Art Exhibition Award for best photograph, painting or print with his work “Septenary Circles.” He says the idea for the artwork was inspired by the weekly mathematics and computer science colloquium at Albion College. “We have speakers who are talking about some interesting topic in math or computer science, something that they wouldn’t normally see in a course,” Reimann says. 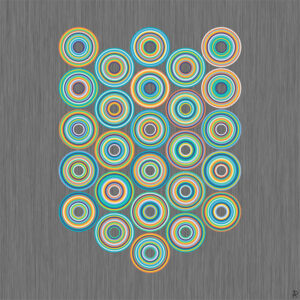 A decade ago, a speaker at the colloquium gave a talk about Langford sequences. Reimann’s interest was sparked. “I just kind of tucked it away in the back of my mind for a while,” he says. He also became aware of Bridget Riley, an optical artist who first became popular in the 1960s and is famous for her paintings of vertical stripes of color. “I kind of put these two ideas together into this artwork,” Reimann says.

Inspired by this problem, Reimann says, “I combined this idea of Langford’s original connection of this with colored blocks to these Bridget Riley stripe paintings, and just use concentric circles rather than vertical stripes as a way of doing that.”

The award Reimann received last month was presented as part of the Joint Math Meetings art exhibition. “The Joint Math Meetings is a mathematical professional meeting that draws maybe over five thousand mathematicians every year to talk about math, and there’s a big exhibit hall with books and other things. But one of the things they’ve had for maybe 20 years now — they’ve had an art exhibition as a part of the conference,” Reimann explains. He started exhibiting in the show 10 years ago and is a frequent contributor, joining about 100 other artists.

For Reimann, the connection between math and art is natural. “Math has an intersection with lots of different subjects,” he says. “Oftentimes people think about math as just arithmetic, adding two numbers, or something like that, and certainly number plays a big role in mathematics. But there are things like geometry, which is a major component of art. If you’re drawing a landscape, you’re in some sense capturing a three-dimensional world on a two-dimensional space, and that’s one way that [math and art] intersect.” 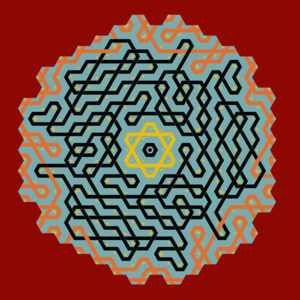 Math applies to other arts as well. “Math can tell a story,” Reimann says. “You can use a mathematical concept to illustrate some aspects of humanity in some way.” One example of this is Reimann’s print “1944,” which was inspired by Dutch graphic artist M.C. Escher. Says Reimann: “Escher used to do something called the potato game with his children, where they would create little stamps and just carve stamps out of root vegetables, and then just use those to stamp on paper to create interesting designs.

“In a book that I read about Escher it mentioned these little stamps, but there was no indication that he ever created any art with these stamps,” Reimann continues. “And so I just kind of took it upon myself to use this as a way of exploring something that Escher might have done with these stamps.”

The story has darker aspects as well. Escher’s art teacher and his family were Jewish, and Escher has written about the family being taken by the Nazis. During Reimann’s 2011 sabbatical, he visited places from Escher’s life as well as the Anne Frank House in the Netherlands. He says he was “just kind of thinking about that horrific time and this artwork is in some sense a response to that. In some sense perhaps it helps tell that story.”

Reimann explains, “It’s not a very mathematical story, but here I’m thinking about using some kind of mathematical idea of tessellations and these stamps that Escher used to tell a little bit of that story.” In the middle of Reimann’s tessellations (repeated shapes) rests a star of David, honoring the Jews who died in the Holocaust.

It is applications such as this that help inspire students to be enthusiastic about math. “Part of that is what we do as professors here in our department at Albion,” Reimann says. “In particular with our colloquium series, it really helps students see this subject that is often maligned and perhaps seen as something that is old, boring and stodgy — unchanging — to see the impact math and computer science can have in our lives today. I think that’s really important for our students.” 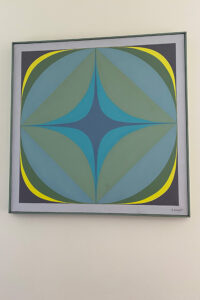 An artwork by 1924 Albion alumna Norma Sleight is on display in the Mathematics and Computer Science Department lounge.

Another inspiration for Reimann is 1924 Albion alumna Norma Sleight, the daughter of a beloved Albion College math professor, and 1901 alumnus, Edwin Sleight. Norma Sleight, who died in 1998, bequeathed part of her estate to the College’s Department of Mathematics and Computer Science, providing funding for many math trips and activities. Included in the bequest were several artworks that she had created, each inspired by a mathematical formula. Sleight’s mathematical art, Reimann says, inspires him to create his own artwork.

Helping others make that link between math and art is important to Reimann. “I think math oftentimes gets stigmatized by lots of things. You go places and you see T-shirts that say, ‘I hate math’ or whatnot, and it goes back to this idea that people are seeing math as just arithmetic and they don’t necessarily see these deeper aspects of mathematics,” he says. “My hope is that in viewing some of the artwork that I make, people will look at something and say, ‘Wow, that’s really interesting. How did that come about? What’s the mathematics behind something like that?’”

Reimann will share his love of math and art with the public on Wednesday, May 11, when he gives a talk at the National Museum of Mathematics in New York titled, “Play Truchet: Fun With Tiling Patterns and Generalizations.” Attendance is free and open to the public. Registration is available for either in-person attendance at the museum or via Zoom for the 4 p.m. ET session or the 7 p.m. ET session.

See much more of the art of Dr. David A. Reimann >>