The economics and management graduate who minored in psychology and cell and molecular biology competes May 27-28. 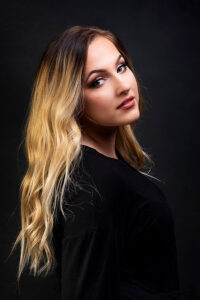 When she was a little girl, Lara Hakamaki, ’20, dreamed of participating in pageants. Now, her dreams are becoming a reality.

Hakamaki is competing in this year’s Miss Michigan USA pageant, representing Ithaca. Her platform, she says, is mental health awareness, something that ties in to her Albion roots.

Hakamaki discovered a love of psychology at Albion after taking a class. “I just took one class and fell in love with it,” she says, but because she was due to graduate too soon to add a major, “I ended up just minoring in it. By taking classes for fun I took enough classes to have the credits for a minor.”

Even before taking a psychology class, Hakamaki was already invested in mental health. “My platform of mental health has always been important to me from quite a young age, because I’ve got family and friends who have dealt with mental health struggles their entire lives, and so seeing that growing up it was something that was always a passion of mine,” she says.

Then, in college, Hakamaki experienced mental health struggles of her own. She found ways to cope with them, including getting an emotional support animal, a dog named Jordyn but lovingly known as Worm, who stayed with her in her residence hall on campus.

A psychology professor who made a difference for Hakamaki was Dr. Andrea Francis. “She’s super thoughtful, always willing to help,” says Hakamaki. “Although I’m passionate about it, there are certain parts of psychology that were extremely hard for me.”

According to Hakamaki, Francis was invaluable to her development as a psychological services professional. She says Francis’ ability “to sit down and explain everything in different ways taught me how to explain things to others in ways that are understandable to them.”

Hakamaki made an impression on Francis as well. “Lara is thoughtful, personable and persistent — all the things we hope for students who graduate from Albion College,” Francis says. “Lara has always been invested in supporting others and promoting mental health. During her time at Albion, she regularly supported her classmates inside and outside of the classroom and conducted a very creative study about self-esteem and makeup usage in my Research Methods and Statistics course. I am excited for her to have the opportunity to have her voice heard.”

Hakamaki says her time at Albion helped prepare her for presenting her mental health platform. “Albion has definitely impacted my ability to communicate clearly what is important to me and what I really am passionate about — mental health,” she says. Albion also prepared her for her professional career. “I was able to get my dream job by having the studies I did,” she says.

Hakamaki is director of corporate development for Michigan Psychological Care, and says that when she applied for the position, “I thought, this is the absolute perfect job for me because it’s corporate development, so it utilizes my economics and management major while using my psychology minor while working in our psychological care facility, and then my cell and molecular biology minor in dealing with all the physicians in Michigan.”

When Hakamaki applied to enter the pageant, she says, “I wrote my essay about my position here at Michigan Psychological Care and my love for working in mental health care, and a couple days later I got an acceptance.” Her boss is one of her sponsors.

Hakamaki says that although some of the other contestants are also using mental health awareness as their platforms, hers is unique, because of her vocation. “I also want to throw in the fact that I have resources,” she says. “Anyone in Michigan can receive our services via telemedicine, but if you live near any of our five offices, you can also stop in and see in-person therapists.” Michigan Psychological Care is opening a new office in Jackson in a few weeks.

She may be competing against other Miss Michigan contestants, but Hakamaki says she has found them to be a kind and supportive group, guiding her through her first pageant experience. “I was super surprised,” she says. “When you think of pageants, you think of girls who are a little bit secretive and just kind of in it to win it, and they’re not very nice and a little bit catty. But the girls I have met have all been incredibly supportive.” She has connected with many of the contestants through social media, and some of them even drove more than an hour to help Hakamaki prepare.

The Miss Michigan USA pageant is right around the corner: May 27-28 in Port Huron. Tickets are available to the public on the pageant website to attend either in person or virtually, and there is an option to vote for Hakamaki. Regardless of the outcome, Hakamaki is looking forward to making a difference with her mental health platform as she pursues a cause about which she is passionate.