The nearly 60-person gathering earlier this fall included the dedication of a memorial bench (right foreground) at the Davis Athletic Complex.

Nearly 60 people attended a pregame gathering at Gina’s Restaurant in downtown Albion, sharing stories of their former teammate, classmate, student and friend. “There were about 10 parents of her teammates that came, too,” Carol recalls. “That was astonishing to me. But Tracy was special to a lot of people.” 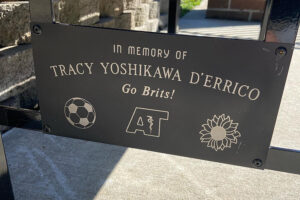 A marker at the bottom of the dedicated bench.

Yume Nakamura, ’10, notes that she and the Mosses originally set a fundraising goal of $1,500 to pay for a bench and engraved memorial. “I stopped the fundraiser after five days because we raised a lot more than that,” Nakamura recounts. The additional funds paid for the pregame gathering.

About 75 individuals contributed to the memorial—“Albion people, but also high school and graduate school friends,” Nakamura says. “Tracy was a Type-A perfectionist who also knew how to relax and really enjoy life. She was a generous person and affected so many people. I’m not surprised that so many people wanted to be part of this.”

At the time of her death, D’Errico was the women’s soccer athletic trainer at North Carolina State University, a strong NCAA Division I program. Not surprisingly, the Mosses are proud of this accomplishment, but note that D’Errico’s legacy at Albion was recognized even before this success.

Bob explains that mentoring—juniors with first-years, seniors with sophomores—was a central part of Albion’s athletic training program, and D’Errico excelled at it. Not only did the department give D’Errico an unprecedented two “Student of the Year” awards, in 2017 the Kinesiology Student Mentoring award was named “The Yoshi” in her honor.

“Tracy did a senior seminar presentation on mentoring and it blew me away,” Carol recalls. “She interviewed students and gathered research. I actually saved that presentation and used it when I talked about mentoring with new students.”

“Pretty much our entire team came back to celebrate her life,” says Caitlin Bowman, ’10, who played eight years of high school and college soccer with D’Errico and was her Albion co-captain their senior year. “It was great to catch up with everyone and see her parents and show our appreciation for all that Tracy had done for us.

“It was great to bring us all together again and celebrate a wonderful life,” Bowman concludes. “It reminded me of all the great memories I have from Albion.” 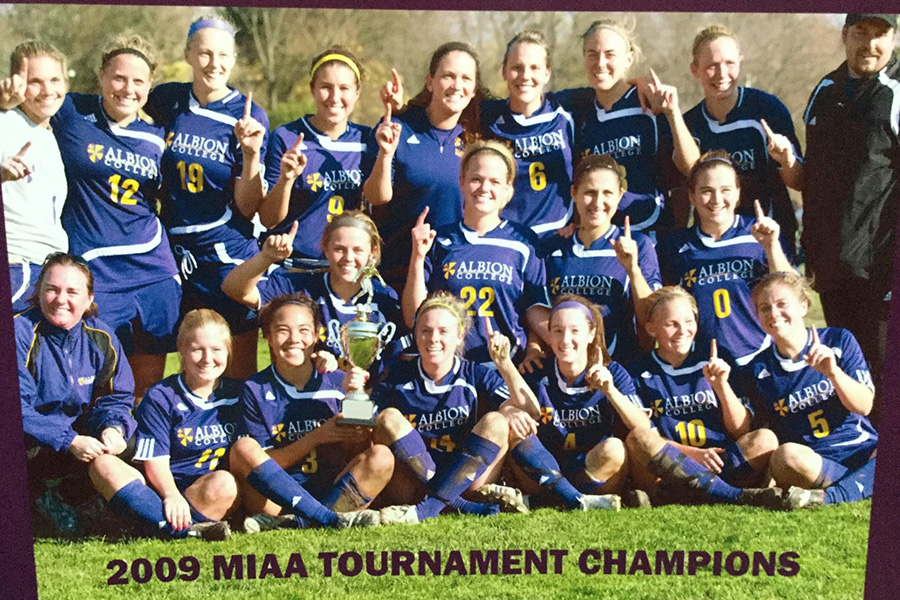