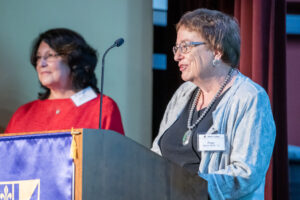 Peggy Sindt spoke in the Washington Gardner auditorium during an event earlier this fall.

Peggy Sindt, ’73, wants every Albion College student to have a chance to develop their potential through experiential learning—the way she and her husband did during their own years at Albion.

Experiential learning, she says, is “the opportunity for students to learn outside the classroom, through travel or internships or volunteerism, that enriches the academic experience.”

Four years ago, Peggy and her husband, the late Conrad Sindt, ’69, created the Conrad J. and Margaret Meyer Sindt Experiential Learning Endowment to support Albion students. Recently, Peggy made a generous addition to the endowment in honor of Conrad, who died in early 2020.

“The endowment is something that we worked together to put in place and it was important to both of us,” she says of the bequests, “and so that’s why the gift in memory of him went to that fund.” The gift matters to her, she says, because she and her husband felt strongly that finances should not be a hindrance for students seeking experiential learning opportunities.

While classes and labs are, of course, key aspects of undergraduate learning, Peggy believes that additional experiences can be enriching. Academics, she says, are “core, but we both benefited a lot from volunteer activities that we did while we were students, and throughout our lives.”

Conrad Sindt was a Calhoun County Circuit Court judge for 25 years; his commitment to serve took root as an Albion student as part of the volunteer ambulance service, and later with Albion Public Safety. Peggy Sindt retired a few years ago as president and CEO of the Albion Economic Development Corporation.

“This gift is a representation of the passion that Peggy has for Albion College and the students that it serves,” says Marc Newman, vice president for institutional advancement. “The inspiration she provides with her time, talent and treasure motivates our entire team and ensures that Conrad’s legacy of service continues to live on.”