Dr. Selva Raj and His Work Continue to Resonate With Religious Scholars

A recent book on global Catholicism does a deep dive into the late Albion professor’s study of Christianity in India. 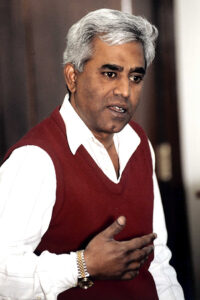 Dr. Selva Raj was a member of Albion College’s Department of Religious Studies from 1995 until his death in 2008.

At the time of his sudden death in 2008, Dr. Selva Raj, Albion College professor of religious studies, was respected internationally for his unique approach to scholarship focused on Christianity in India.

More than a decade later, Raj continues to impact active scholars. The College Theology Society’s All the Ends of the Earth: Challenge and Celebration of Global Catholicism (Orbis Books, 2020) devotes a full three chapters to his work.

“In addition to studying the unique characteristics of Christianity in Southern India, Selva engaged in detailed ethnographic observation of ritual exchange between different religious traditions in the region,” explains Dr. Ron Mourad, Albion College provost and professor of religious studies. “He noticed that practitioners of religions with different beliefs often found shared inspiration and meaning in common rituals or sacred spaces. His work illuminated the ways that ritual could facilitate a kind of interreligious communication even when words failed.”

Given the thousands of religious studies scholars examining contemporary Catholicism—not to mention the countless scholars over the past millennia—Mourad explains the significance of Raj’s focus.

“Selva’s work was quite original in applying an ethnographic approach to the topic of interreligious dialogue,” he says. “Theologians and philosophers are used to comparing religious concepts and arguments, rather than religious practices. It seems that his methodological approach continues to inspire members of his large community of collaborators.”

A popular teacher whose courses addressed feminism, environmentalism, humor and other subjects, Raj simultaneously held leadership roles in international, national and regional scholarly organizations. He earned graduate degrees in India and was an ordained Catholic priest before coming to the U.S. for doctoral study at the University of Chicago. He worked with Mother Teresa in Calcutta for many years and played a role in her funeral service. At the time of his death, he had been commissioned to write a memoir of his time with her.

“He was truly a many-splendored human being,” says Dr. Bindu Madhok, professor of philosophy, who co-taught an interdisciplinary Honors course on India with Raj and was a close friend. “He was brilliant, scholarly, determined and passionate, and he lived his dream of contributing everything he had to the academy and to the people he loved dearly. In his typical unassuming and modest way, Selva would have taken so much pride in his impact on ongoing scholarship in global Catholicism.”