Dr. John Carlson, an Accounting of a Decade of Impact

The Albion economics and management professor is retiring at the conclusion of the spring 2022 semester. 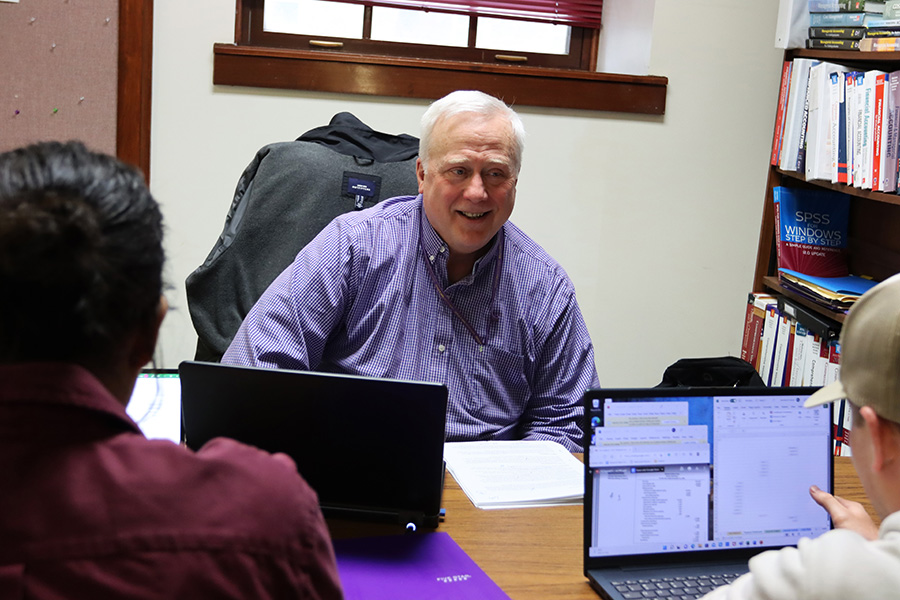 “My favorite part of teaching at Albion every year is working with the students,” says Dr. John Carlson, associate professor of economics and management, who after a decade of service to Albion College is retiring this month. “I just like helping out, getting them started on their way, whatever that direction is.”

Carlson’s colleagues remember his commitment to student success well. “John Carlson is, and will be, legendary for students,” says John Bedient, associate professor and chair of economics and management.

A corporate accountant for many years before Albion who also worked for the Cincinnati Symphony, Carlson has been especially known for his creative assignments. “He created an accounting scenario around the movie The Big Lebowski. He called it The Dude, after the movie’s main character,” Bedient says. The problem was designed to prompt students to come to Carlson’s office. “We all knew when The Dude was due because there would be students overflowing his office and clogging the hallway,” Bedient says.

“He will also be remembered for his time in the office with students dishing out equal parts accounting knowledge, life advice and recruiting pitches to become accounting majors,” Bedient says.

“I really appreciate the time that Carlson puts into knowing his students,” says Katie Donahue, ’13, a tax manager at Plante & Moran, PLLC and a certified public accountant. “Beyond being a professor, he was a part-time counselor, career planner and comedian. For me personally, I don’t think I would be where I am today if he hadn’t sparked my interest in tax and coached me through applying for my master’s,” she says.

What stood out to Donahue most? “Professor Carlson’s quick wit and ability to make almost any subject matter sound interesting, even taxes,” she remembers. Another quality, she says, was “his creativity with his class assignments, which made learning more fun and added variety to our workload.”

Carlson’s commitment to his students means that the most memorable moments for him as a professor were “Commencement, every time,” he says. “I was totally taken aback by my first Commencement in 2013, how cool it was for me on the teacher side.” Used to more impersonal ceremonies at larger schools, Carlson was struck by the personal touches. It was meaningful for him as an instructor to see students he knew well graduate.

“I would work with one student maybe four years in a row, from first year all the way through their senior year if they were an accounting major, and so you get to see them change and grow,” Carlson says. “And then you meet their families, and you just sit back and tell a few stories about what it was all about. Commencements are very strong, emotional, bittersweet moments, because you’re saying goodbye, and you’re proud that they’re moving on.”

He says he is most proud of “the number of my students who I still stay in touch with as the years go by. I’ve been to some weddings now; I’ve found out some of them are actually parents now; I’ve helped them make career changes.” 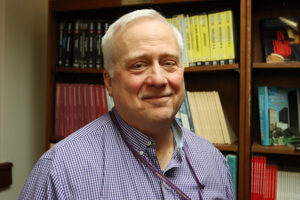 Carlson looks forward to retirement and spending more time with his granddaughter. A second grandchild is on the way. And he’s also ready for some leisure time. “I like to read and write. It just won’t be about accounting,” he says. “I definitely could do something new. I’ve been doing accounting for 40 years.”

Albion College, Carlson says, “was everything I expected, plus more.” When he graduated with his Ph.D. in 2012 from the University of Cincinnati, he felt pressured to find a position at a large research institution. But Carlson knew that wasn’t what he wanted. He looked for a small liberal arts college, and Albion was the perfect fit.

“It’s much more personal and easy going,” he says. “Laid back, but we still get the job done.”

Carlson will be missed by his colleagues, and by the students about whom he cared so much.