The retired Detroit-area psychologist and educator will join fellow 2021 and 2020 Alumni Award recipients October 23 during Homecoming.

Dr. Coletta Thomas talks about leadership, service and her Albion experience as a student and an alumna.

Coletta Nelson Thomas, ’76, knows the drill. During her eight years on the Albion College Alumni Association Board of Directors, and a two-year term on the Board of Trustees, she reviewed dozens of nominations for alumni awards.

Nonetheless, “I was flabbergasted,” Thomas says of being named the second recipient of the James L. Curtis Alumni Leadership Award.

With her close friend Darrell Williams, ’77 (the inaugural Curtis Award recipient in 2020), Thomas will be honored as part of the Alumni Awards ceremony during Homecoming festivities October 23 (watch the ceremony).

“It’s like the Oscars—it was nice to be nominated,” she says. “Actually winning? That was unexpected.”

Thomas may have been surprised with the award, but her decades of devotion and service to Albion leave no doubt about what led to it. Beyond her time on the Alumni Board and Board of Trustees, Thomas has served on presidential search and campaign committees as well as an admission volunteer and a class representative. She has rarely missed a Homecoming in 46 years, particularly because it’s an important gathering for Black alumni of all generations. Thomas is, of course, active in the Black Alumni Chapter, and took it upon herself to establish and maintain the BAC Facebook page.

A native of St. Louis, Missouri, Thomas arrived alone on campus after a 14-hour bus ride. “I told my mother she couldn’t come, because it was just too long to ride,” she says. A city girl, Thomas was charmed by Albion’s green spaces and an unusual encounter that first day. “Someone had a cow on Hannah Street,” she recalls. “It’s one of those things that can happen in Albion. I just fell in love with this place.”

As a student, Thomas was active with the Afro-American Union and The Pleiad, but notes that her first campus involvement reflected another of her life’s passions. “I first got involved with the Commission on the Status of Women,” she says. “We were doing things that hadn’t been done before, like organizing trips to Jackson so that students could get a Pap smear. I loved the work we did.”

Her focus on the well-being of others had renewed during Thomas’ “second career.” Before her retirement this summer, she spent the past 14 years with Common Ground Sanctuary, a behavioral health agency focused on youth and families in crisis. With a Psy.D. in clinical and humanistic psychology earned in 2009, Thomas provided inpatient and outpatient therapy at Common Ground, in addition to directing their crisis assessment team and the mobile-services and crisis telephone line programs. 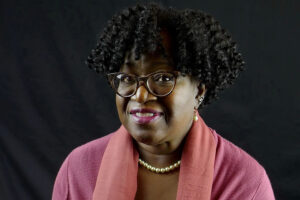 Dr. Coletta Thomas on the bonds between Albion’s Black alumni and current Black students: “We’re still committed to the [Black Student Alliance] and to each other. We’re still a family to this day, because of Albion.”

She had spent more than two decades in education before her son, Quinn Thomas, ’01, inspired her to go back to school and start working in mental health. “I followed in his footsteps because I was so impressed with what he was doing,” she says (Quinn continues to work as a psychologist in private practice). “He finished his master’s degree in June 2005, and I started my doctorate that September.”

Coletta insists that, likewise, she and her former husband, Vincent Thomas, ’73, led by example in helping Quinn find “his” school.

“We took him to tour other schools and he knew it was his decision where to go,” she says. “But we also made sure that from the time he was a baby until he graduated himself, Quinn never missed an Albion Homecoming. And once, I did call our house and pretend I was an Albion recruiter. It didn’t work. But I was thrilled when he picked Albion.”

Quinn’s Albion career overlapped with Coletta’s time with the Alumni Board, but Coletta was determined to be like the other “normal” parents. “I told Quinn, ‘I have to be in Albion for meetings, but I won’t be in your business,’” she recalls with a laugh. “I’d be talking to someone and they’d start smiling and I knew it was because Quinn was behind me. He wanted my keys, and he wanted my money—and I still had to take him to the store and pay for the groceries.”

She laughs again. “He had no problems with me being on campus.”

Coletta holds a certificate in Detroit/Motown ballroom dancing and is also a certified advanced master gardener. She is currently hyper-focused on a multiyear plan to transform the yard and garden of the Lathrup Village home she purchased in 2019.

“Gardening is the thing that gives me the most joy—and I’m not sure I’m done being a therapist—but basically, I see myself as an artist,” she says. “I do my own decorating, I like to cook, I like to ‘MacGyver’ stuff. I was an art minor, and everything I do is art.”

In the weeks leading up to the ceremony, Thomas has allowed herself time to reflect on the Curtis Award—not so much the work she did to earn it, but the work others did that supported her success.

“Albion is a tough school and among the Black students, our primary goal was supporting each other to make sure we stayed in school and graduated,” she says. “It’s nice to see the progression, that there is more diversity on campus, but we’re still committed to the [Black Student Alliance] and to each other. We’re still a family to this day, because of Albion.”