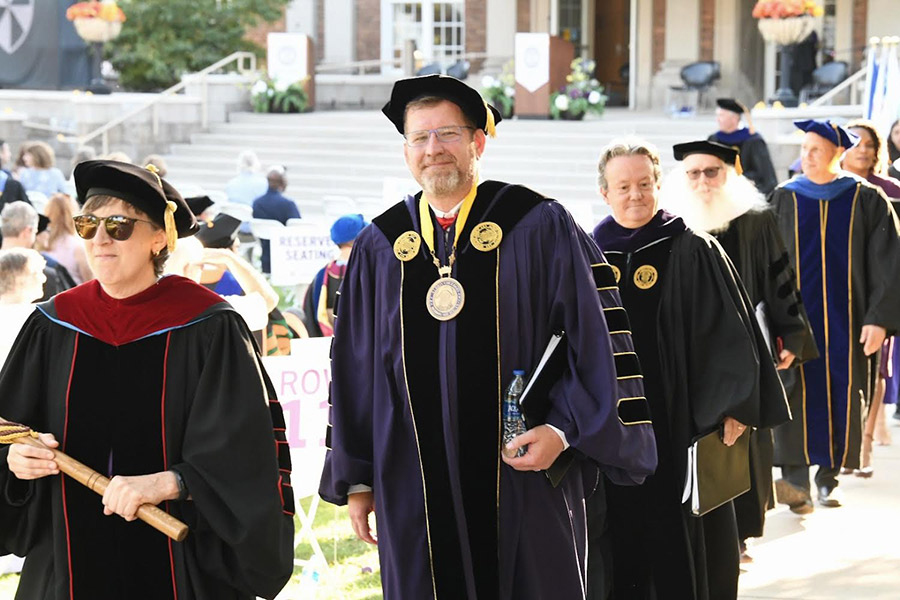 Dr. Mathew B. Johnson was formally inaugurated as the 17th president of Albion College on Saturday, September 18, 2021. 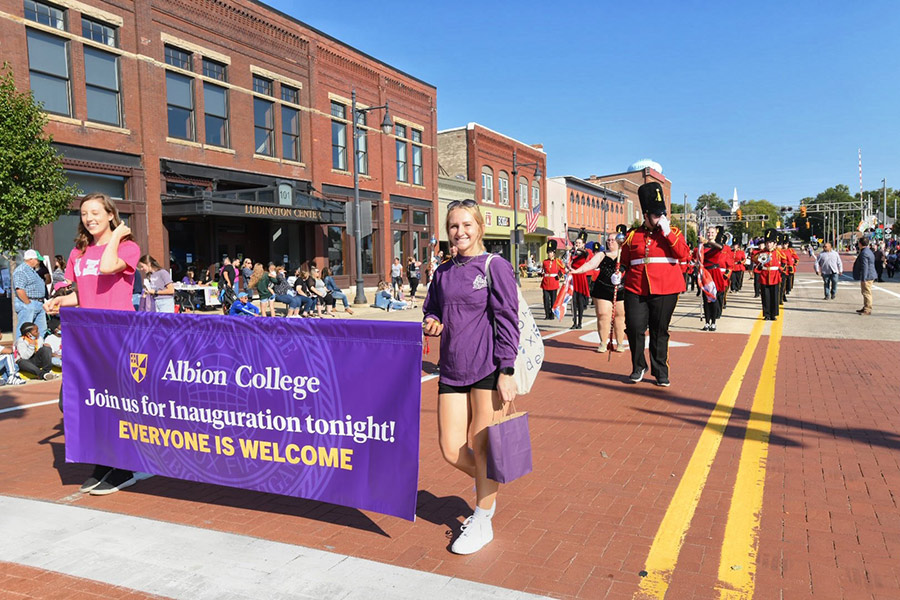 During the morning of Inauguration day, the College participated in the City of Albion’s annual Festival of the Forks parade on Superior Street.

The platform party and additional College leadership gather for a formal photo in front of Goodrich Chapel prior to the Inauguration ceremony processional. 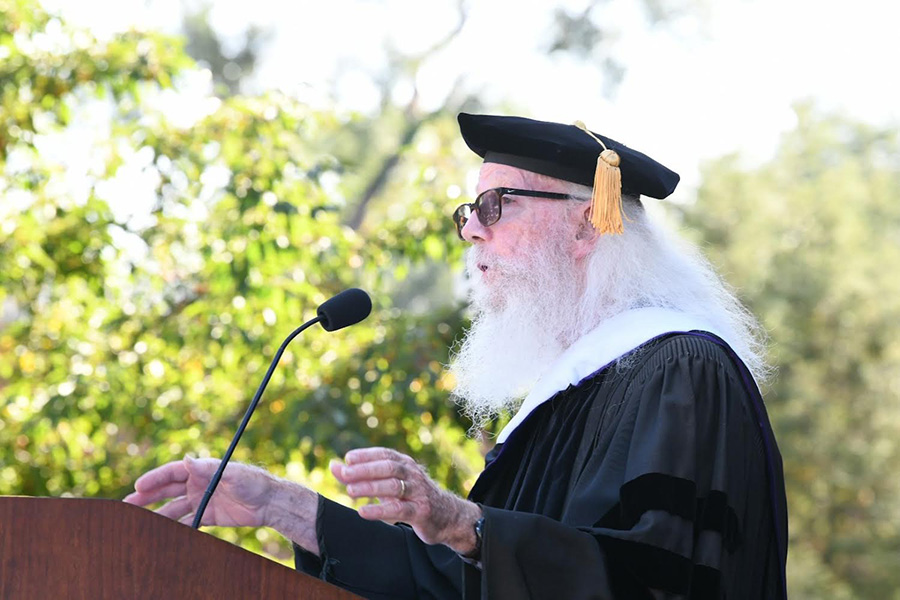 Professor emeritus of history Dr. Wesley Arden Dick spoke about the intertwined history of Albion College and the community of Albion, Michigan. 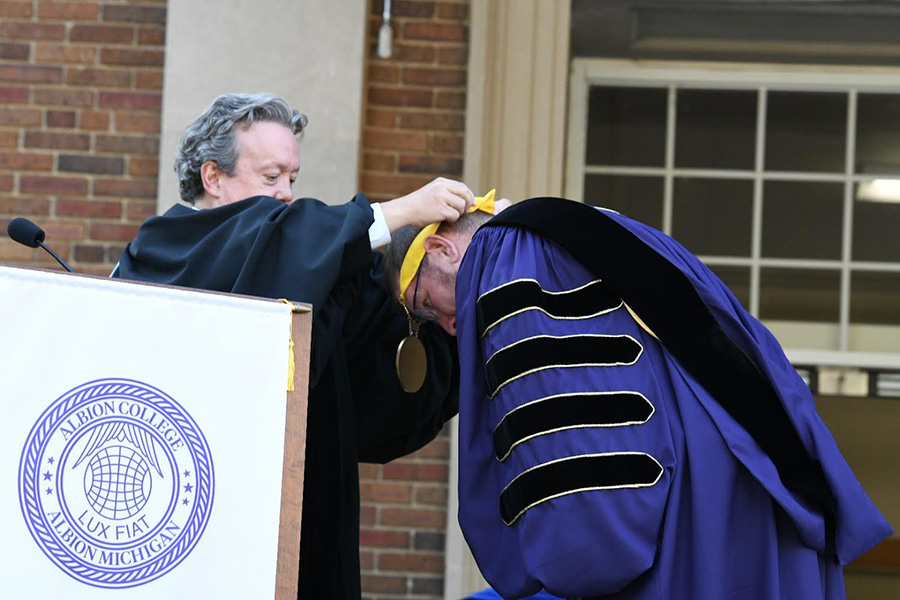 President Johnson receives the Presidential Medallion from Michael Harrington, ’85, chair of the Albion College Board of Trustees. 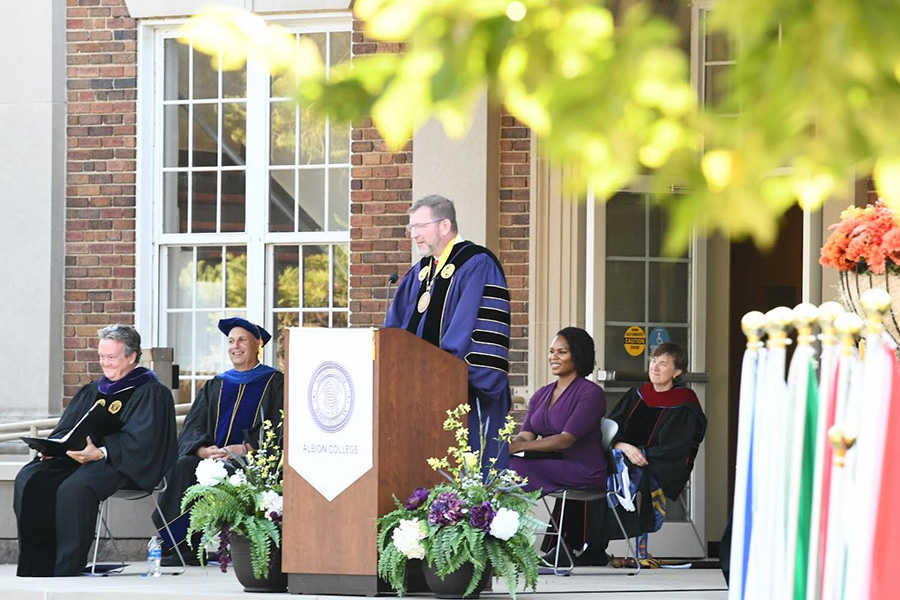 President Johnson delivers his Inauguration address during the late afternoon of a beautiful late summer day. 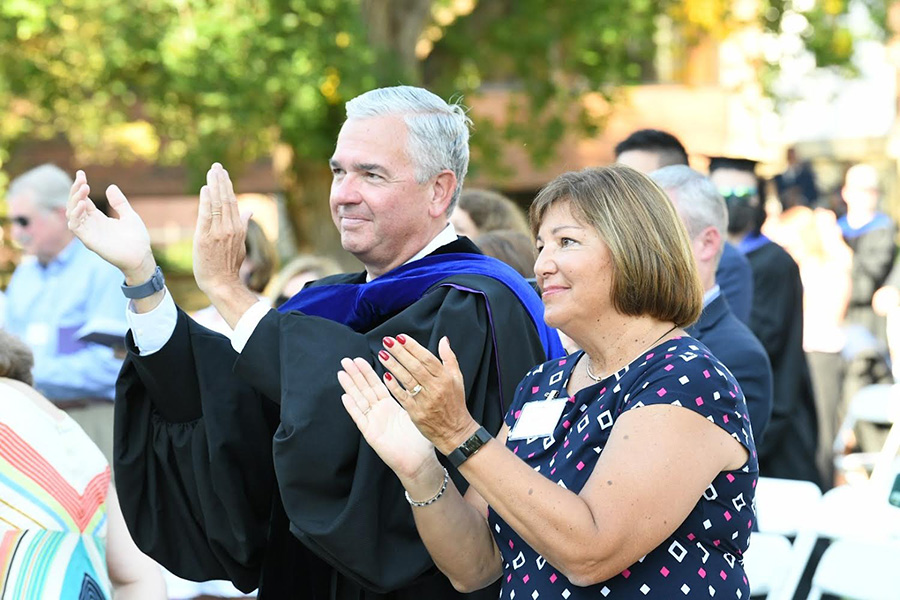 Don Sheets, ’82, member of the Board of Trustees and past chair, and Angela Sheets, ’82, were recognized for a new $1.2 million gift to the College. President Johnson announced that going forward, the steps and entrance to Kresge Gymnasium, home to Commencement and other convocations, will be known as the Donald and Angela Sheets Pavilion. 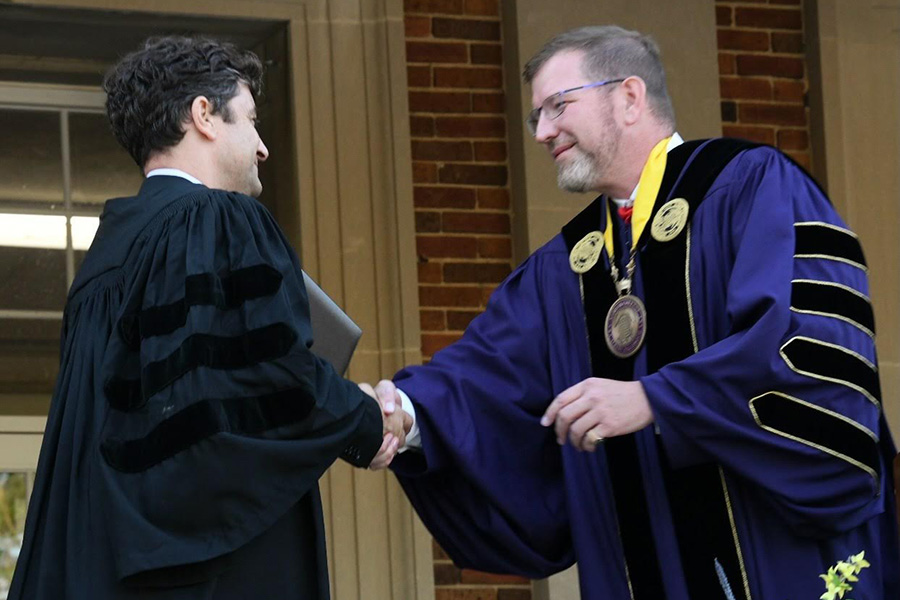 Dr. Johnson presented his first honorary doctor of humane letters degree as president to Dr. Timothy Knowles, president of the Carnegie Foundation for the Advancement of Teaching. 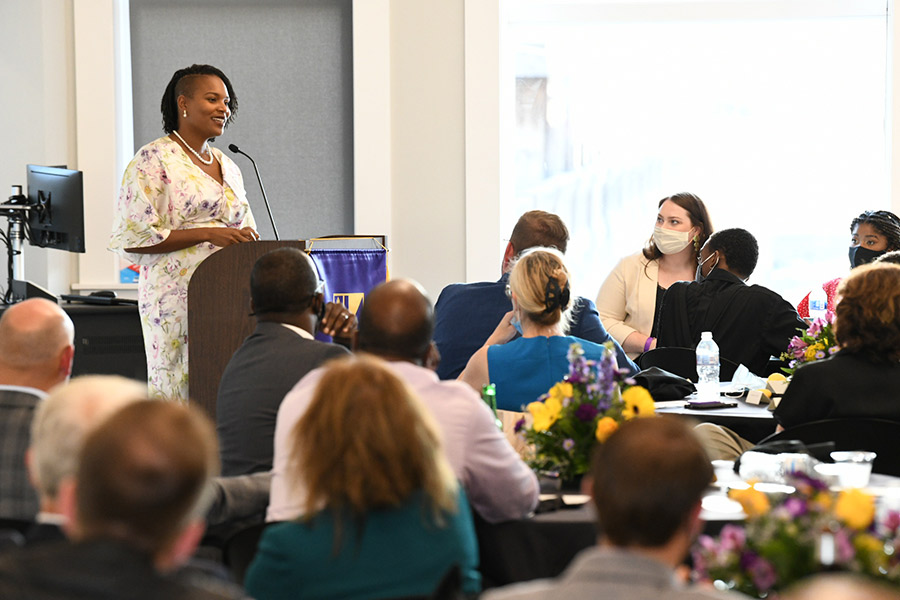 Inauguration weekend began with the dedication of the School for Public Purpose and Professional Advancement on Friday, September 17. The school’s dean, Dr. Ashley Woodson, delivers remarks. 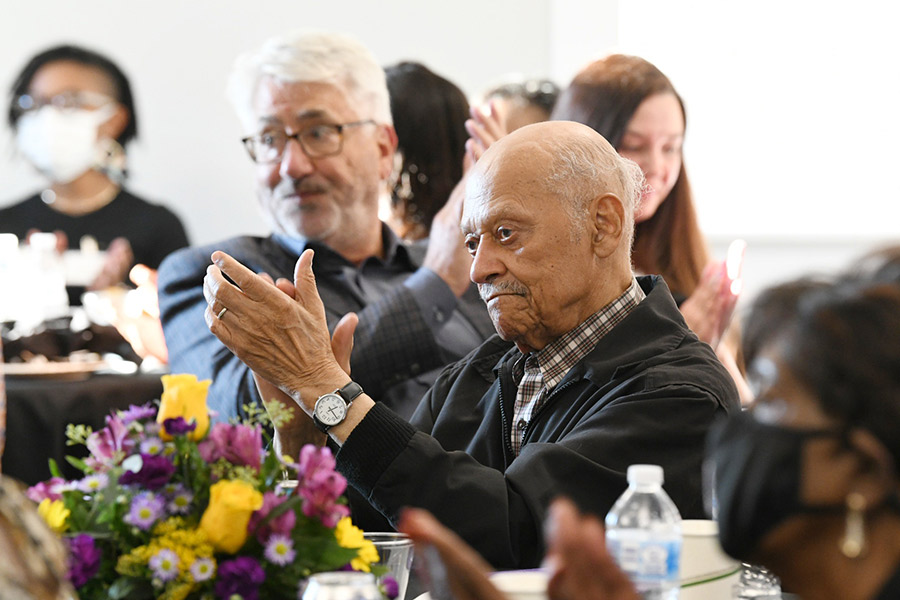 Dr. James Curtis, ’44 (foreground), attended the dedication, which included celebrating the new Curtis Institute for Race and Belonging. The College’s institutes and centers reside within the School for Public Purpose and Professional Advancement. Trustee Dr. Larry Schook, ’72, is in background. 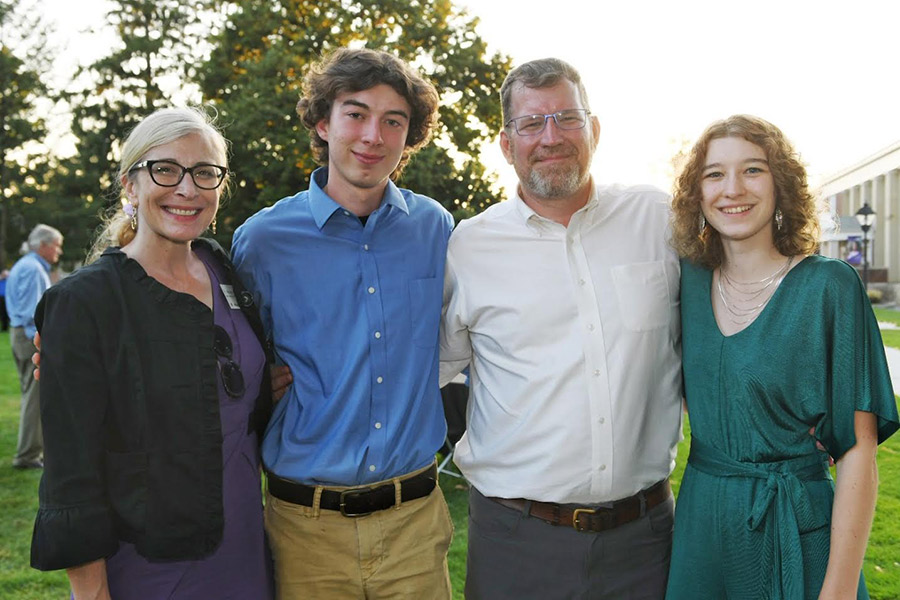 A perfect Saturday afternoon set the stage for the Inauguration of Dr. Mathew B. Johnson as the 17th president of Albion College. But while Dr. Johnson is Albion’s “new” president, he has actually been on the job for more than a year—a period of time that, for Johnson, has been plenty long enough to lay the groundwork for several new programs and initiatives. In turn, the Inauguration ceremony and related festivities celebrated both Dr. Johnson and the College’s progress into a new era.

Still, the president, early in his Inauguration address September 18 on the Quad, recalled the uniquely challenging circumstances that have been a constant presence from Day One.

“On March 15th, 2020, I sent an email to the planning team: ‘We are in the air.’ We were not sure the flight would take off or if we would make it here because of the pandemic. None of us really knew what was to come.” Dr. Johnson said of his visit to Albion, from Rhode Island, during the presidential search process.

A little more than two months later—still roughly 35 days away from his official July 1 start date—then President-Elect Johnson returned to Albion to lead the planning for a fall semester like no other in the College’s history. The campus may have been a “ghost town” at the time—but the sign outside the Washington Gardner school building welcomed Dr. Johnson and his partner, Dr. Shannon O’Neill; in the planter outside the door of the President’s House was a tomato plant from Dr. Trisha Franzen, professor of women’s, gender and sexuality studies, who also runs Albion Community Gardens; inside, cookies from Foundry Bakehouse and Deli were in the kitchen.

Through these and many other gestures across the last 550 days, President Johnson explained, he and Dr. O’Neill, associate dean for student success, “have fallen in love with Albion, the college and the community.”

Albion’s School for Public Purpose and Professional Advancement—a hallmark initiative of Johnson’s first year—“is Mathew Johnson to the core,” said Dr. Maud Mandel, president of Williams College, in her ceremony remarks. Mandel recalled being impressed by him during a hiring interview when both were at Brown University, when she asked the “bold and ambitious” candidate how he handled “intractable” problems.

That response “captured a fundamental aspect of his personality and leadership,” Mandel added, reflecting on the importance of this attitude, for Albion and the larger world.

“As our country navigates the next moment in its history: racial justice, climate change, technological explosion, we need leaders who do not believe in intractable problems, who seek solutions even when the challenges seem daunting, who fight to support students even when resources are strained. These are the qualities you have in your new president.”

A member of the Albion community for only two months, Dr. Ashley Woodson, dean of the School for Public Purpose and Professional Advancement (SPP), captivated the audience with a lesson she drew from the old “Lumbertown” sign on a building between campus and downtown now owned by the College. While considering Albion’s job offer, Dr. Woodson told Dr. Johnson she wanted the sign, which unfortunately broke when it was removed from the building.

“I know we’re tired of tearing things down, we’re tired of watching things crumble. We’re tired of brittle signs,” she said. “We have been forced to confront the shortcomings of our democracy, we have reached beyond the limits of our compassion fatigue, we are burned out from perspective taking. We are exhausted.”

But, Woodson continued, “in the case of the Lumbertown sign and in so many other cases … we must choose the more inclusive experiential pathway over the sign, over the symbol, every time.”

Referencing President Johnson, she added, “In every text, every conversation, every email from my interview to today, you remind me of this necessity. The substance over the symbol. My decision to join you is based on a radical optimism that your discretion in pivotal moments—the moments we decide what to preserve and what must be left behind—won’t fail this community…. The source of our inspiration is not behind us, but before us.”

Woodson’s time on campus spans only weeks, but Dr. James Curtis, ’44, first set foot on Albion’s campus more than 80 years ago. The only African American member of his class at the University of Michigan School of Medicine, Curtis went on to a distinguished career in psychiatry in New York, working and teaching at Cornell University, Columbia University, and the Harlem Hospital Center.

Addressing the Inauguration crowd, Curtis credited much of his personal success to social movements of the 20th century—and noted that Albion’s brand-new Curtis Institute for Race and Belonging will support Albion students who want to work on 21st-century issues.

“I’ve seen a lot of change at Albion over the years, and what I see today is both hopeful and exciting,” Dr. Curtis remarked. “President Johnson is driving a bold new vision in partnership with students, faculty, staff and community leaders. I believe in that vision, and I am honored to play a role in it.”

The ceremony featured some additional exciting news for those in attendance and those watching the livestream online. Andrea Brimmer, chief marketing and public relations officer at Ally Financial, announced the company’s financial support of Albion College’s work with the Carnegie Foundation’s elective classifications on diversity, inclusion and belonging, and in support of SPP activities.

“Ally believes the work that happens on this campus can change the world for the better—and we want to be part of that,” Brimmer said.

In recognition of the extensive service and contributions of Donald and Angela Sheets, ’82 ’82 (including a brand-new $1.2 million gift), President Johnson announced the renaming of the Kresge Gymnasium entrance as the Donald and Angela Sheets Pavilion. Along with demonstrating Albion’s gratitude, Johnson explained that the Pavilion demonstrated the Sheets’ “mark of confidence in the future of Albion and in the vision we have articulated for a vibrant institution leading the nation in education committed to public problem-solving.”

Dr. Johnson opened his own remarks by acknowledging and thanking dozens of staff members who prepared the ceremony, an activity that he has made part of many College functions. He went on to cite many examples—from professors with community leadership roles, to staff maintaining grounds and students assisting with policy changes—reminding the audience of the wealth of contributions that make up the campus community.

He then turned to issues—especially touching on historic access to Albion’s liberal arts tradition and institutional racism—that have prevented Albion from reaching its full potential.

“Some have said that I am diminishing Albion by sharing these stories… They say I am sitting in judgment of the college that they love,” Johnson said, quickly explaining that in truth, “the essential confrontation with reality demands that we face the uncomfortable truth of these stories. I share them because the values and principles of this community demand I do so.”

Yet he made clear that “Brits have the determination, the curiosity and the courage to face the essential confrontation with reality and transform it into a marvelous opportunity, as we always do with every challenge that we face.” A few moments later, at the conclusion of his address, President Johnson borrowed from President Gerald Ford’s remarks following his August 1974 swearing-in: “The dream of Albion is alive. Our vision is strong. Our great college is a college of purpose, not privilege. Here, all are welcome. Here, all belong. Here, all have the courage to create.”