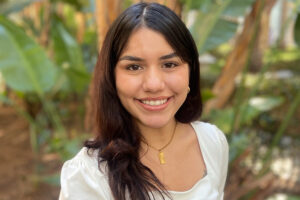 The “Golden Age” of antibiotic discovery was between 1950 and 1970 but since then no new classes of antibiotics have been discovered.

That may not seem like a big deal to most outside of the medical community, but consider the fact that in 2019 more than 1.27 million people are estimated to have died worldwide because of antibiotic resistant bacterial infections. That number is expected to increase to more than 10 million people per year by 2050.

Irene Corona Avila, ’22, is working hard to change that.

After graduation from Albion with a degree in biochemistry, Corona Avila applied for a student undergraduate research fellowship at the University of Illinois-Chicago. The ten-week program gave her the opportunity to continue to research the topic.

“My project goal is to find a new pipeline (for antibiotics),” said Corona Avila, who also serves as a member of the Albion College Board of Trustees. “We are focusing on how antibiotics are discovered and how we can modify the pipeline.”

That research was recently honored by the American Society for Pharmacology and Experimental Therapeutics (ASPET) Biomedical Symposium. Corona Avila won first place in the undergraduate student division within the drug discovery and development category for her research entitled, “Isolation and Characterization of Antimicrobials from Icelandic Aquatic Bacteria.”

ASPET has more than 4,000 members and includes researchers and students in academia, industry and government from all over the world.

Discovering new pipelines for antibiotics does not solely happen in a laboratory.

The research Corona Avila is working on started in Iceland.

“You never know where these are going to come from,” she said. “Our researcher went to Iceland to see if he could locate bacteria from the environment there. He brought them back and we are conducting research on them.”

“Irene is very passionate about science,” said Dr. Craig Streu, associate professor of biochemistry at Albion College. “She did some research here at Albion on the directed evolution of antibodies on the Nipah Virus. The virus is one the World Health Organization identified as being among the most likely to cause another pandemic.”

“These are incredibly competitive awards by some of the top undergraduate students in the nation,” said Streu. “Irene understands her topic very well and was able to explain it to the judges. She really made her case about her research.”

“We need new antibiotics but the pharmaceutical companies have divested in them because it is not economically viable,” said Streu. “That is why people such as Irene are really humanity’s last hope for developing these things.”

Corona Avila said her curious nature led to her interest in science at Albion.

“In science, there are always questions that need to be answered and you are always learning,” said Corona Avila. “You have to be on your toes.”

It is also a personal journey for Corona Avila.

Her parents migrated from California to Georgia and her father was diagnosed with gastric cancer. He died in 2008, but Corona Avila said that experience showed her how she could make an impact.

“I saw the consequences of not knowing about the health system and not being health literate. I knew that I wanted to be a part of the change for the BIPOC (Black, Indigenous and People of Color) community,” she said. “There are many cultural differences, besides language, that cannot be resolved in the 15-minute window that healthcare gives to each patient.”

The goal for Corona Avila is to become a doctor and continue to do independent research in virology.

“I want to bridge the gap between science, the public and healthcare,” she said.