Albion’s Class of 2026 Begins Its Journey 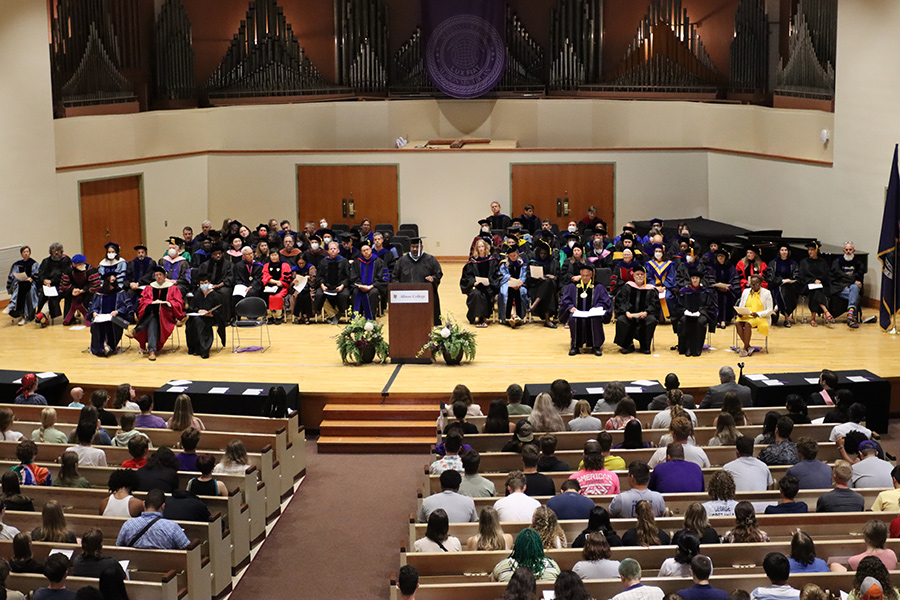 Leroy Wright, vice president of student development and dean of students, addresses the Class of 2026 in Goodrich Chapel. 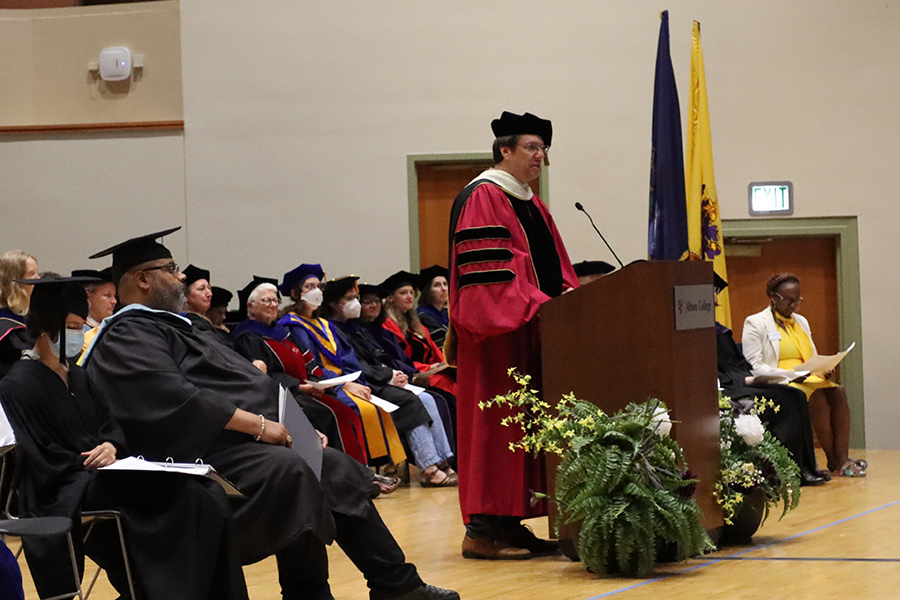 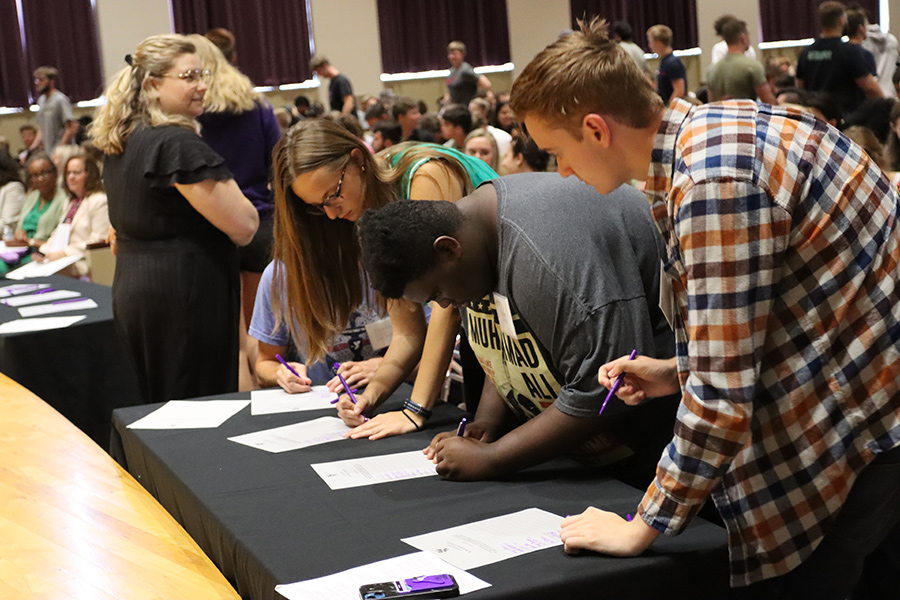 A Matriculation Ceremony tradition at Albion, students take a moment to sign their names into the College’s history. 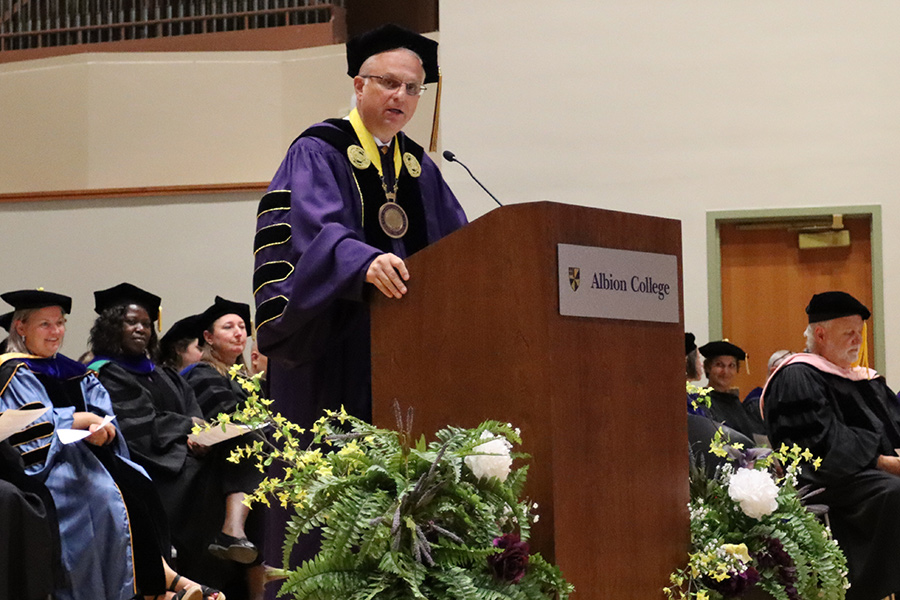 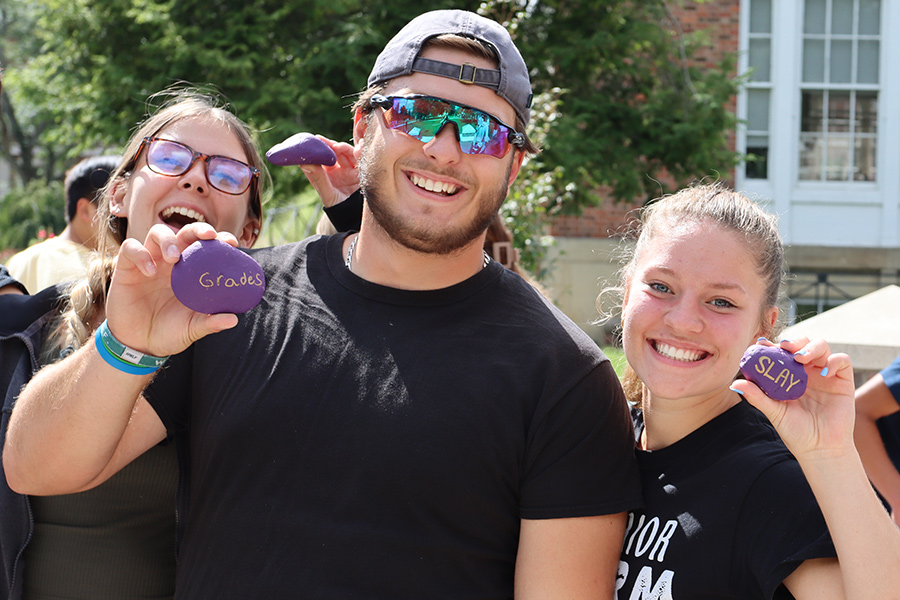 Just before Matriculation, student-painted rocks were placed along the walkways outside Goodrich. After the ceremony, students picked up a rock with a message meaningful to them.

“I almost feel the need to go out and get myself a new box of pencils, I am that excited,” said Interim President Joe Calvaruso, ’78, during his remarks to the Class of 2026 at their Matriculation Ceremony August 26. The ceremony capped Albion-O, the College’s five-day launch experience for the entering class.

“This week, you began your social journey with us, the all-important part of college that means so much. Next week, you start your academic journey,” Calvaruso said from the Goodrich Chapel stage. “Both paths join at some points and diverge widely at others, but together form your Albion experience. And no two are the same. That is a gift we give to you and to all students who join us for their four years of undergraduate education … here, you’ll deconstruct the liberal arts and construct the foundation for the rest of your life.”

Albion’s Class of 2026 continues to reflect the College’s appeal to students across the country. From Hawaii to Rhode Island and Idaho to Florida — and from campus to a few blocks away — the first-year students embody the diversity that is a distinct feature of campus. In all, 30 states are home for Albion’s domestic students, with nearly 30 percent coming from outside Michigan.

Transfer students from schools in Virginia, Ohio, Texas, Indiana, California, Wisconsin and Michigan join the Class of 2026 as new Albion faces. On August 29, they will be among the nearly 1,500 students on campus this fall (official count of students will not be finalized until mid-September).

Matriculation ended with a new Albion tradition — the creation and exchange of rocks decorated with inspirational phrases. The students each created a rock during Albion-O, then selected a rock made by someone else. “I like to keep it simple, and this rock says, ‘Do Good in School,’” said Atiyah Artis, ’26, who led the Class Pledge during the ceremony. “I picked this rock because this is a reminder I can use every day.”