A pair of volumes by Dr. Lia Jensen-Abbott aids in sharing anew the story of one of the most important African American composers. 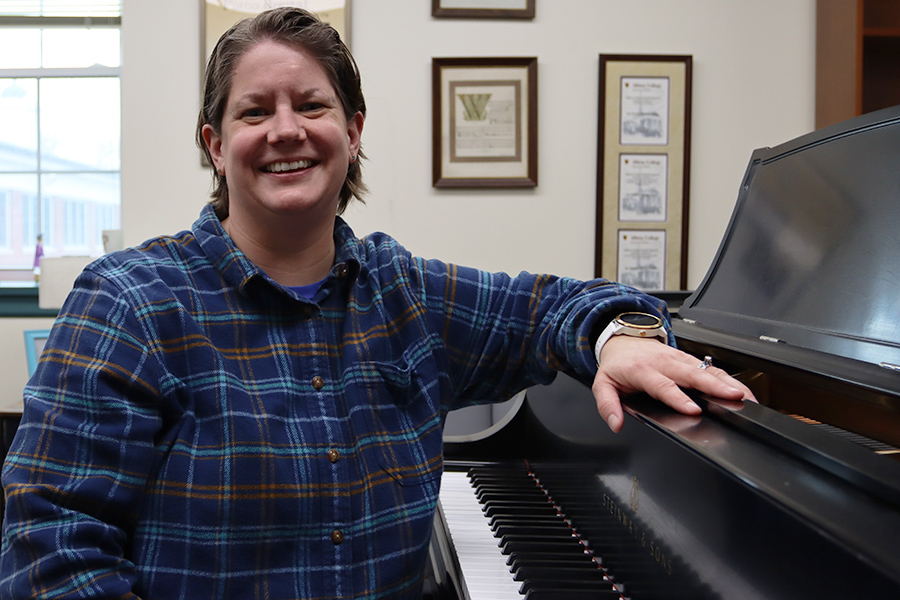 Dr. Lia Jensen-Abbott, in her Goodrich Chapel office, says of Florence Price, “A lot of composers don’t take the time or can’t write good teaching pieces. I think this is where her talent and passion really come together.”

Gifted and prolific 20th-century composer Florence Price spent much of her life unheralded and unrewarded.

And since her death in 1953, Price and her works had gone mostly unnoticed — until just a few years ago, and today an Albion College music professor is adding more to the story of an immense musical talent and her place in history.

In 1933, Price became the first African American woman to have an orchestral work performed by a major orchestra (the Chicago Symphony Orchestra). Even so, her remarkable music and life were largely overlooked for decades.

That has changed, thanks to the more recent increase in African American history scholarship. Also contributing in the last few years is the music scholarship of Dr. Lia Jensen-Abbott, who is also director of Albion’s Prentiss M. Brown Honors Program.

Much to her surprise, Jensen-Abbott has become widely regarded as an expert on Price’s piano music and pedagogy. And from her work over the past decade, piano teachers across the country are both learning Price’s music and teaching it to their own students.

It almost didn’t happen for Jensen-Abbott, or for Price. But in 2013, Jensen-Abbott attended a conference focused on women and music, where she heard some of Price’s vocal works. “The program notes mentioned that Florence had written a piano sonata and I’m always looking for new music,” Jensen-Abbott recalls.

Eventually, Jensen-Abbott was invited to perform the sonata at the University of Arkansas-Fayetteville; she also received an invitation to go through its collection of Price’s papers. (Price was born in Little Rock, Ark.) The archives “were full of all these teaching pieces in manuscript,” Jensen-Abbott says. “I met with a publisher and told her there was good reason to look at Price’s teaching music.”

Jensen-Abbott’s discovery dovetailed nicely with a national movement among teaching professionals to give piano students more music by underrepresented composers. Jensen-Abbott eventually edited and published two volumes of Price’s beginning and intermediate piano music. These efforts led to an invitation from the Frances Clark Center, one of the world’s largest piano pedagogy organizations, for Jensen-Abbott to produce a video course on how to teach some of Price’s more advanced works.

And while she doesn’t expect to be involved in the editing of Price’s work in the future, Jensen-Abbott recounts the astonishing story of UA-Fayetteville finding more of her music. Around 2015, UA-Fayetteville was contacted by an individual who had purchased the Chicago-area home where Price had spent the last years of her life. “I saw pictures; it was pretty dilapidated, with trees growing through holes in the roof,” Jensen-Abbott says. The new owner, thinking the boxes might be something important, researched Price online and eventually donated the boxes to UA-Fayetteville.

“Some of the manuscripts were too damaged to save,” Jensen-Abbott says. “But I was the second or maybe third scholar to see them.” 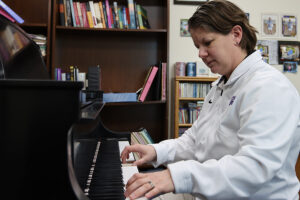 In addition to her exploration of the teaching works of Florence Price, Jensen-Abbott also leads the Diabelli Squared Project, an endeavor among composers globally that centers on one of Beethoven’s greatest piano works.

While the Chicago Symphony performance nearly 90 years ago makes Price a part of American music history, Jensen-Abbott notes that her work — in the face of discrimination and the Great Depression — shows the true breadth of Price’s talent.

“Florence Price was trained at the New England Conservatory, and unlike many women composers, she worked in ‘big’ formats — piano sonatas and symphonic music,” Jensen-Abbott says. “But a lot of composers don’t take the time or can’t write good teaching pieces. I think this is where her talent and passion really come together. I think she wrote a lot of this music because her students couldn’t go to a store and buy music. She wrote this music so they would have something to play.”

Jensen-Abbott further notes that while Price’s sonatas are “really hard” to perform, her 8-year-old son has enjoyed playing some of Price’s beginner pieces. “As someone who studies pedagogy, I see Florence as really forward-looking in how she breaks down concepts and how she’s aware of the physicality of the piano and the physiology of the hand,” Jensen-Abbott explains. “These aren’t considerations you see in the pedagogies developed by many prominent teachers and performers historically.”

In 2022, Jensen-Abbott has given one international webinar on Price (for the Frances Clark Center) and has been invited to statewide conferences in Michigan, Oklahoma and Oregon, where she’ll share Price’s music with hundreds more piano teachers. She has also been a guest artist at Howard University, thanks to a friendship developed with Karen Walwyn, a professor and concert artist with a scholarship focus on African American composers.

“It’s been kind of amazing,” Jensen-Abbott says. “Learning about Florence Price as a person, as a musician, I’ve met people who are deep researchers about her. It’s an inspiring academic path for me.”

Learn more about the life and work of Florence Price.