For Dr. Vicki Baker, professor of economics and management, it’s always been about the big picture. 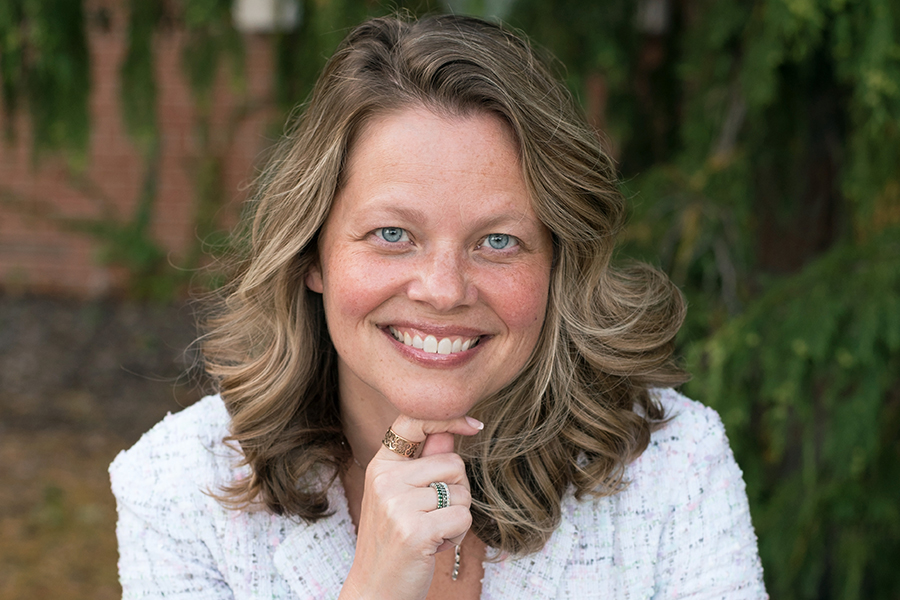 “I’m interested in helping people and understanding why they do what they do and what motivates them,” she says. “I want to know, ‘How can I get the best out of my team and put my team members in a position to leverage their strength?’”

If that sounds like someone who views higher education as something more than classroom lectures and assignments, it’s because Baker has always looked for something more from her students, as well as herself.

“It’s a curiosity about human behavior and what makes people tick,” she says. “How do you inspire people? And I don’t take myself too seriously. What you see is what you get and I’m invested in student success.”

The irony is that Baker, who has taught at Albion College since 2007, had never planned to go into education, even though a fair portion of her family did just that.

“My mom and dad were in K-12 education, as were my uncle and aunt on my mother’s side,” she says, noting that her grandfather served as superintendent of the Armstrong School District in Pennsylvania, northeast of Pittsburgh.

And while she grew up with an appreciation for education, “I vowed I’d never go into it.”

Indeed, for a time Baker was a safety engineer in Ashland, Ky., after earning her B.S. from Indiana University of Pennsylvania. She left Kentucky to pursue an M.B.A. with a concentration in management from Clarion University of Pennsylvania, noting “ I didn’t want to be a 55-year-old woman wearing steel-toed boots and a hard hat to work every day.”

After earning her M.B.A., she accepted a position as an administrator at Harvard Business School, working in their executive education division for nearly three years. While at HBS, she realized she wanted to pursue higher education as a career—on the faculty side. So Baker left Cambridge for State College, Pa., where she earned her master’s in management and organizations and a Ph.D. in higher education administration at Penn State University, teaching management courses in the Smeal College of Business while enrolled. “I guess it’s genetics,” she says with a laugh. “It’s what I wanted to do.”

During her final year at Penn State, Baker knew she was more interested in finding opportunities to teach at smaller schools, and found a home at Albion and its Economics and Management Department (E&M). She was tasked with building the management curriculum and experiential offerings.

“I wanted a smaller setting so I could build personal, long-lasting relationships,” says Baker. “You can’t do that with 450 students in a class.”

Reflecting further, she says simply, “It feels like yesterday.”

Baker has watched as E&M has grown and evolved, while she has found a pathway to pursue topics that she believes are vital to the future of higher education.

She has authored or co-authored three books on groundbreaking work supporting mid-career faculty, developing faculty at liberal arts colleges, and offering guidance to women associate professors. A fourth book, Managing Your Academic Career: A Guide to Re-envision Mid-Career, is now in the works.

Baker is a co-founder of Lead Mentor Develop, an academic career and professional development consulting group that helps businesses, nonprofits and higher education in the areas of mentoring, faculty development and leadership. In early 2020, prior to the pandemic, she served as a Fulbright Specialist and went to the Netherlands for two and a half weeks to support faculty development at University College in Utrecht, a college housed with Utrecht University’s College of Academic Teaching.

Her work has also been featured in national and international media outlets including Inside Higher Education, The Hechinger Report, The Wall Street Journal, The Atlantic, USA Today, The New York Times, The Chronicle of Higher Education and The Huffington Post. As well, she lectures and holds workshops around the country on the issues of mid-career faculty development.

But in the long run, for Vicki Baker, it’s about the teaching and the interaction with students. In fact, she recalls a lesson she learned from her grandfather, also an educator, that has stayed with her over the years.

“He said, ‘One of the greatest opportunities you have as an educator is to help others.’ So when presented with the chance to do that, you must. Otherwise, why pursue a career in the field?

“When students move on from their time with me at Albion College, I hope they know I cared about them and was invested in them.” Baker continues. “If my students can feel that and know that I care, I call that a win.”