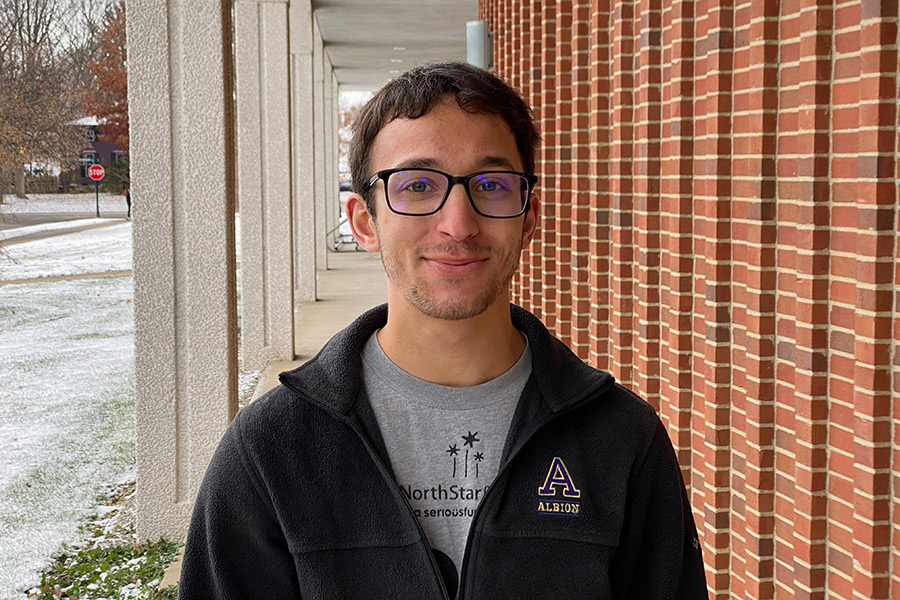 From his first moments at Albion, Tyler Hood, ’21, felt at home. For his first campus visit, he stayed overnight at a fraternity house and was immediately impressed. “I fell in love with the place. I fell in love with the people,” he says. “Everyone knew each other, talked with each other. It seemed like they were family, and that’s how I knew I wanted to come to Albion, because I wanted to be with a family outside of my own.”

Hood came to Albion from Michigan’s Northville High School as a psychology major, but that soon changed. “It was my second semester freshman year and I walked into my first day of class and there was this purpose-driven professor, Dr. Julie Cousins. She came in and it was 8 in the morning and it seemed like she drank three cups of espresso,” he says with a smile. “And she was so excited about the body, and I was like, that is exactly what I want to be like. I want to love what I’m learning about so much that I can wake up at 8 a.m. and be that excited and that energetic to talk about it. And since then I just fell in love with the physiology and anatomy of the body.” Hood kept psychology as a minor, and changed his major to kinesiology.

Hood has come to view Cousins as a mentor during his time at Albion. He says she has been influential to his growth as a student. He worked with her closely last summer on a FURSCA project, and has spent time under her wing throughout his years at Albion.

“Working with Dr. Cousins has shown me that it’s OK to make mistakes and it’s better to ask for help than to not,” Hood reflects. “Dr. Cousins has always been so generous, so easygoing and patient with me, more so than a lot of people have, and it showed me that working with her and also working as a kinesiologist is what I came to Albion to do.”

And that is what Hood will continue to pursue after Albion. Hood is set to graduate in December. After graduation, he will be working as an exercise assistant at the Ann Arbor Probility Physical Therapy rehab clinic. He then plans to attend graduate school. “I’m going to go to occupational therapy school so I can get my license and doctorate, and practice it hopefully in Michigan,” he says of his plans.

Hood’s accomplishments have been recognized during his time at Albion. He recently received the Promoting Academic Excellence Award, a recognition of students who have had significant positive influence on their peers. Hood is a coach for the Stockwell Scholars, which involves meeting regularly with a small group of first-year students and helping them navigate the academic and social aspects of college.

He says he encourages the students to seek out new experiences and leadership opportunities that might enhance their college experience. “One of the students I currently work out with on a weekly basis at the Dow. Others I’ve encouraged to try new things such as going to fraternity parties or going to different clubs or organizations that they might not be completely comfortable with, or it may be a new atmosphere for them,” he says.

Hood himself has been an active member of the Albion College community. He is the current president of Diversability, a club “that brings awareness as well as support to the disability community and their allies,” he says. He is also a member of the Alpha Phi Omega academic fraternity and the Student Volunteer Bureau, of which he says, with a laugh, “We had a great meeting yesterday which was geared toward mental health, where we pied each other with shaving cream. I can still kind of feel the bubbles popping in my ears.”

That’s what Hood values most about his time at Albion—the true college experience. “I really like the people that I’ve met. And just the experiences I’ve been allowed to have,” says Hood. “I don’t think after I leave college I’ll probably ever get a group together and go to a football game, or go to a club to pie other people, or make a mess which we’ve been given permission to do, or go to a fraternity party and just dance for fun.”

In fact, that’s his advice to future Albion students. “Don’t do what I did my first year and just stay in your room and shelter yourself from other people. Go to all the opportunities, meet all the people that you can,” he says. In spite of his slow start, Hood believes he has made up for it by getting the most out of his time at Albion in the years since.

His number-one takeaway from his Albion experience? “There’s always a possibility and a chance for development and success. Albion’s taught me that,” he says thoughtfully. “Even if you have to wiggle your way out of the box and think a little differently, there’s always a way to achieve what you want.”