The psychology professor has received a national social sciences mentoring award from the Council on Undergraduate Research. 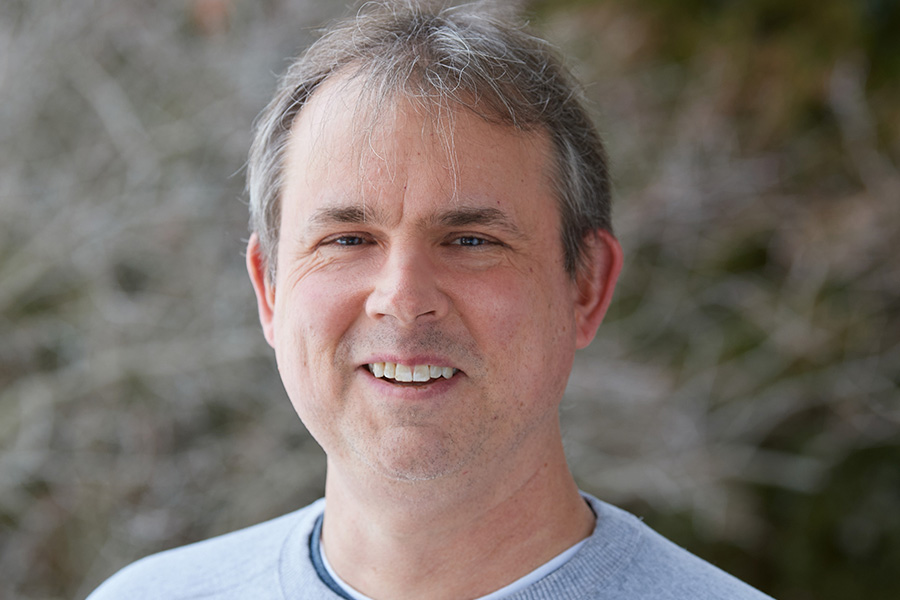 Dr. Drew Christopher, who grew up around Dallas-Fort Worth, Texas, has taught and mentored Albion psychology students for 20 years.

On a Friday in May 1995, University of Florida first-year psychology graduate student Drew Christopher received an unexpected phone call from his department chair.

The chair asked Christopher if he would be interested in teaching a course on his own. Christopher assumed the class would be in the fall; alas, it was to start the following Monday, leaving him all of three days to prepare.

“I couldn’t really say no,” says Christopher about the opportunity that arose from a faculty emergency. Although he had exposure to teaching as a teaching assistant helping a professor, this would be his first class as the sole instructor.

“And it was every bit the disaster I thought it would be,” Christopher recalls with a chuckle, “until I got the evaluations back.” After realizing the students’ feedback collectively landed in the above-average range, “I thought to myself, how did that happen? Maybe there was something there I was actually good at,” he says. “I definitely knew after getting that feedback that I wanted to teach again.”

Twenty-six years later, Dr. Andrew Christopher, professor of psychological science at Albion College, has connected with hundreds of undergraduates in the classroom and, even more impactfully, dozens in the research lab, where student-faculty collaboration can particularly shine. Since his arrival on campus in 2001, the industrial/organizational psychologist has seen his students attain success in a variety of career fields, including in academia.

And now those efforts are receiving national recognition. The Council on Undergraduate Research (CUR) recently named Christopher its 2021 awardee for Excellence in Mentoring Undergraduate Research in the Social Sciences. According to CUR, the award recognizes “outstanding undergraduate research mentors in the social sciences who promote a positive and inclusive scholarly and teaching environment for undergraduates, as well as contribute to the professional and personal development of students inside and outside of the classroom.”

For Christopher, the award is particularly meaningful because it spans across the social sciences. Years earlier, an industrial psychology class at Stetson University proved to be a bridge to the economics and finance major’s eventual career path.

But he wasn’t on that bridge alone. “I got really good mentoring as an undergrad that I didn’t appreciate until I got to the University of Florida, where undergrads had to fight for mentoring,” Christopher says, adding that mentoring “is probably among my favorite activities. A student’s research is always something very specific, so it helps me develop my own ideas, which in turn can help inform my classroom teaching, especially where students are having trouble understanding concepts in doing their research.”

He continues: “Learning how to present information is one of the most important things I can do, because students will need to do that themselves whatever their job is going to be. That’s what research can help all students learn to do.”

Presenting at the College’s Elkin R. Isaac Student Research Symposium and at national conferences have consistently provided fantastic opportunities for Albion students. A positive faculty mentoring experience helps make those milestones possible, but at the same time Christopher understands not all students traverse the same ground to reach those milestones. In its award announcement, CUR stated that “Dr. Christopher is at the forefront of mentoring many of Albion College’s first-year, underrepresented and first-generation students, which compose approximately 40 percent of the College’s undergraduate population.”

Christopher says that, throughout his time teaching undergraduates, when it comes to research, “It’s important not to shoot for the stars—in terms of publications or conference presentations—right away. You have to meet students where they are.”

Meeting them where they are can run the gamut, from bringing the latest COVID-19 data into class discussions to exploring the psychology behind the marketing of Pop-Tarts by the Fortune 500 company just down the road in Battle Creek.

“It’s my job to do more to make academics more appealing—make it more than just getting a diploma,” Christopher says. “And research is a great venue for that.”

This summer, Christopher has one FURSCA student—Samantha Brand, ’22, who is researching gender differences in political attack ads—as he prepares for a sabbatical this fall. He’ll attend a couple of conferences, write, continue his service on the GRE test development committee (which he joined in 2016), prepare a new class, then be ready for more connections come spring.

And having taught a First-Year Experience seminar each of the last two fall semesters, he is excited about the next few cohorts of Albion juniors and seniors.

“Seeing students go from point A to point B to point C—and it’s different for every student—seeing that light bulb turn on, that is what is really rewarding,” Christopher says.