The honor from the Division for Planetary Sciences of the American Astronomical Society recognizes the Albion physics professor’s extensive public outreach. 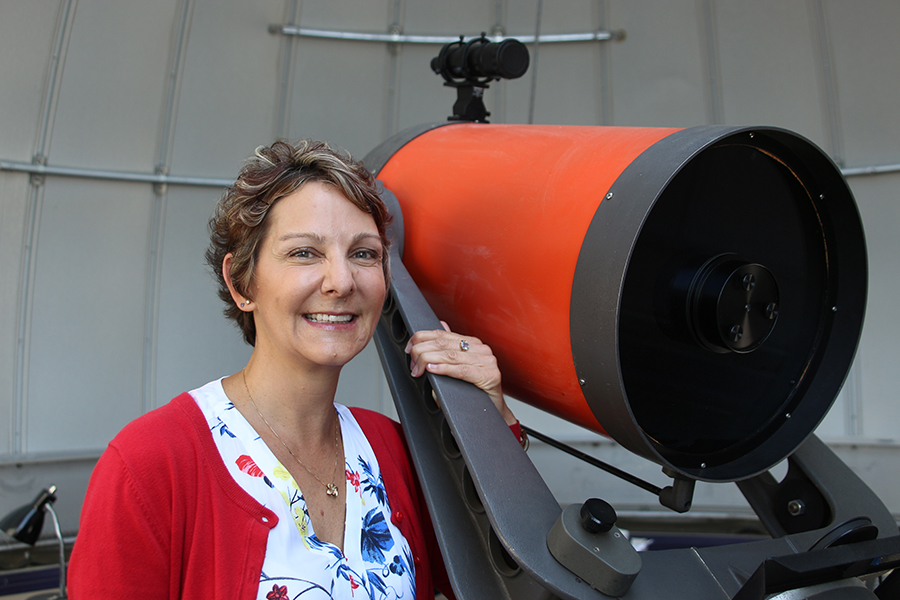 Dr. Nicolle Zellner, standing in the observatory atop Palenske Hall, joined the Albion College physics faculty in 2005. She regularly encourages College and community members to look up, especially during worldwide events such as the annual International Observe the Moon Night, the 2012 Venus transit and the 2017 Great American Solar Eclipse. And she already wants to spread the word about the April 8, 2024 solar eclipse: “Totality will happen in Toledo, Ohio, so we’ll be really close.”

As clear as the clearest night for stargazing, Nicolle Zellner easily recalls the time she met Carl Sagan.

After all, it’s hard to forget meeting an icon. Before Neil DeGrasse Tyson, there was Carl Sagan, arguably the United States’ most well-known astronomer and planetary scientist of the 20th century.

In 1993 in Boulder, Colo., at the annual meeting of the Division for Planetary Sciences (DPS) of the American Astronomical Society, Zellner was in line to meet Sagan. A few months earlier she had received her bachelor’s degree from the University of Wisconsin-Madison, and was soon to begin graduate school.

“I brought a book for him to sign at a meet-and-greet, and I told him he was a big reason why I first became interested in science,” says Zellner, who like hundreds of millions of others first saw Carl Sagan as host of the award-winning 1980 public television series Cosmos: A Personal Voyage. “I remember other people in line hearing me and starting to say the same thing, and he said in a lighthearted way, ‘I feel responsible for all of you.’ It was an honor to have met him.”

Now, 28 years later, Dr. Nicolle Zellner and Dr. Carl Sagan are crossing paths again, in a way. The DPS announced earlier today that Zellner, the Herbert H. & Grace A. Dow Trustees’ Professor in the Sciences at Albion College, is a 2021 recipient of the Carl Sagan Medal for excellence in public communication, which will be celebrated during this year’s annual meeting (a virtual event) in October.

In describing her two decades of contributions to the field outside the classroom, the organization stated that “Dr. Zellner has spoken to thousands of people around the country and has reached millions more through her written articles, television appearances, radio interviews and more. She uses every opportunity to convey her passion and enthusiasm for space science to audiences of all ages, often bringing these topics to audiences who might otherwise not seek them out.”

During a conversation last week, Zellner said she was “overwhelmed but honored to be recognized” by her peers. But then, right in line with the focus of the award, Zellner shifted to the virtual talk she was preparing to give to the Tecumseh District Library about Michigan’s contributions to space exploration, including the all-University-of-Michigan astronaut crew that flew the Apollo 15 mission 50 years ago.

Zellner says her public talks have multiplied in the last couple of years since contributing articles to Michigan History magazine about Apollo 15 as well as the First Lady Astronaut Trainees, or FLATs, two of whom were from Michigan. The FLATs, known more colloquially as the Mercury 13, were a group of 13 women who underwent the same tests as the all-male Mercury 7 in the early 1960s to see if women would be able to fly in space.

Central to the story of the FLATs that Zellner emphasizes is that their efforts were not sponsored by NASA. One of the women, Wally Funk, now 82, finally had her opportunity to go to space just last month—aboard Jeff Bezos’ personally funded Blue Origin New Shepard capsule.

“Wally Funk actually came to campus in 2008 with Martha Ackmann (author of 2003’s The Mercury 13). They spent a few days here on campus and in Albion Public Schools talking about their stories,” explains Zellner, who will give a keynote September 25 about the FLATs during the Historical Society of Michigan’s annual Michigan History Conference. “In my First-Year Experience class we also talk about the Mercury 13.”

Up Close With NASA

That FYE seminar, Fly Me to the Moon, is on hold this fall as Zellner continues a yearlong leave in service as a program and proposal review officer for NASA. The post follows nearly a decade of grant funding from the space agency for her research on lunar impact glasses and, with Dr. Vanessa McCaffrey, professor of chemistry, research on shock (impact) chemistry of simple sugars.

“I thought this would be a great opportunity to learn about [NASA] headquarters, to learn a little bit more about how the agency works, from the employee side rather than from the grantee side,” Zellner says.

Still, she adds, “I miss teaching already.” But that feeling is balanced by the excitement of being able to eventually connect Albion students with more internship and experiential opportunities in NASA centers around the country once she returns to the classrooms and labs of Palenske Hall.

“I’m itching to get my astronomy students and physics students involved with my core NASA work,” Zellner says. “I want to build this NASA experience and connection into our physics program.”

The Albion-NASA connection should be even further strengthened in the months and years to come: astronaut Josh Cassada, ’95, is scheduled to pilot, in 2022, the first operational flight of Boeing’s Starliner capsule to the International Space Station, and classmate Joel Carney, ’95, was appointed assistant administrator for the Office of Strategic Infrastructure in June after joining the agency last year.

Another thing for Zellner to look forward to post-leave: engaging with the community on the Palenske roof once again during the College’s always popular public observing nights.

“Last fall during COVID I was able to offer a public observing night for our students; I think they were just glad to leave their dorms,” says Zellner, perhaps a bit humbly. “There must have been 40 to 50 of them on the roof. The planets were out, the space station flew past, and just to hear them chattering and talking, and the oohs and ahhs, pointing out constellations—I was giddy.

“The energy I get from the students, and sharing my knowledge, seeing their excitement, answering their questions, helping them learn—that’s part of what feeds me,” she adds. “Maybe it’s like a runner’s high.”

An interesting word choice, to be sure, from a planetary scientist. Chances are, Carl Sagan felt much the same way.