Investment from J. Donald and Angela Sheets, ’82, ’82, will serve as catalyst for campus growth and improvement 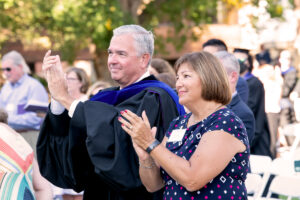 The $1.2 million gift, the latest in a series of investments in the College made by J. Donald Sheets, ’82, and Angela Scott Sheets, ’82, was announced during the Inauguration of Dr. Mathew B. Johnson, the 17th president of Albion College.

Albion College, one of the top 50 innovative liberal arts colleges in the country, recently announced a $1.2 million gift from J. Donald Sheets, ’82, and Angela Scott Sheets, ’82, to fund several campus initiatives now and in the years to come. Albion College President Dr. Mathew B. Johnson made the announcement during his Inauguration ceremony on September 18, 2021.

“Don and Angela each exemplify Briton strength, altruism and passion for all things Albion,” said Johnson. “They have made a lasting impact on the Albion College community by establishing a legacy of selflessness and stewardship. Their vision of a stronger unity between the College and the City of Albion has been instrumental in the restructuring and rebuilding of Downtown Albion, Washington Gardner and other landmarks of the town, and this gift will help continue the realization of that vision.”

The first $200,000 of the gift will be reserved for upgrades to the outdoor gathering space of the Kresge Gymnasium, which will be renamed the J. Donald and Angela Scott Sheets Pavilion. The Kresge Gymnasium is Michigan’s oldest active intercollegiate athletic facility and the outdoor gathering space serves as a central campus location for important ceremonial, academic, artistic and other events. The remaining $1 million will serve as the lead gift for larger campus projects and initiatives included in the generational investment Albion College is making in its campus facilities over the next few years.

“President Johnson and his leadership team have a strong vision for the future of Albion College,” said Don Sheets, who serves on the Albion College Board of Trustees as the immediate past chair and as chair of the Finance Committee. “The College is making key investments in its campus, programs and people and launching bold new initiatives to meet the challenges of today. We are inspired by that vision and honored to be a part of this exciting evolution.”

The Sheets are no strangers to philanthropic contributions to Albion College, having donated $1 million to provide needed financial aid to Albion students through the Sheets Scholarship, as well as funding the restoration of the President’s House and a namesake conference room in the Bonta Welcome Center on campus. Earlier this year, the Sheets both received Briton Medallions, recognizing their impactful work and distinguished service to the College and surrounding community through volunteer efforts, advocacy and financial support.

“As Albion alumni, this community holds a special place in our hearts,” said Angela Sheets. “We want to commit resources to the College’s long term vision to serve future generations of students and create a place of belonging. We look forward to working with College leadership to identify opportunities to achieve those goals.”

Among other accomplishments, Don Sheets was part of a small group working closely with the City of Albion to drive local economic development and establish connections between the community and the College. In addition to improving the community’s economic standing, these efforts accelerated the growing diversity of the College and provided real-world educational opportunities for Albion students.

“This generous gift from Don and Angela is just the latest investment they have made in the success and growth of the Albion community,” said Marc Newman, vice president for institutional advancement at Albion College. “Making improvements to gathering spaces outside the iconic Kresge Gymnasium, among other initiatives yet to be identified, will enhance programming on campus, improve the student experience and open up opportunities for further growth. The Sheets have been steadfast partners of Albion College and we’re eager to put their resources to work for our campus community.”

The Inauguration of President Mathew B. Johnson was held on September 18, 2021, at 4 p.m., following its postponement the previous year due to COVID-19. During the weekend, the College announced the receipt of gifts totaling more than $13 million to honor the Inauguration and support future investments. This included a previously announced major gift of $2.25 million from the current chair of the Board, Michael Harrington, ’85, and Judy Harrington, ’86. For more information on Albion College, visit www.albion.edu.

Albion College is a private liberal arts college of approximately 1,500 students and is nationally recognized for its academic excellence in the liberal arts tradition, a learning-centered commitment and a future-oriented perspective. The College is a leader in preparing students to anticipate, solve and prevent problems in order to improve the human and global condition. Albion immerses students in the creation and processing of knowledge and graduates skilled architects of societal change, active citizens and future leaders. The College is dedicated to the highest quality in undergraduate education and is committed to diversity as a core institutional value.

Albion, Michigan is a culturally diverse community in the south-central part of the state. The College recognizes the value of community, both on- and off-campus and has invested resources in supporting the revitalization of the greater Albion community. This work offers an increasingly vibrant city around the campus that provides students with a fuller experience as they prepare to become engaged citizens in their own communities. For more information, visit albion.edu.