Lauryn Givens, ’22, Gets the Inside Scoop on the Detroit Free Press

A summer internship with the newspaper’s Op/Ed team offered an appreciation for journalistic integrity and the continuing importance of traditional media. 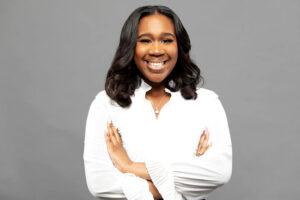 Lauryn Givens is a senior majoring in integrated marketing communication with a minor in history and a concentration in public policy and service. She is a member of the Gerald R. Ford Institute and the Prentiss M. Brown Honors Program. Givens is the child of Lynne Givens-Hunter, and Terence Hunter of Macomb, Mich., and Steven Givens of Cincinnati, Ohio.

It may be the age of social media, but Lauryn Givens, ’22, knows firsthand that people still read newspapers—that the product hot off an actual printing press remains a popular source of information.

And, as the recipient of Albion’s 2021 Joe Stroud Internship with the Detroit Free Press, Givens also knows that there are still people who enjoy writing on paper as well.

“People submit letters on all kinds of topics,” Givens confirms. “It provides the public with the opportunity to express viewpoints and/or respond to particular news events. Someone wrote to us about a building in their neighborhood that they thought should be torn down, while another person described how such a building should be preserved due to its rich history in Detroit. Both perspectives need to be heard.”

Givens spent the summer  learning a lot about the field of journalism, the daily operations of an editorial department, and how this aspect of the newspaper helps to express what’s on people’s minds. Working remotely with the Opinion/Editorial section team, Givens applied her writing skills as an editor, helping to bring diverse voices and concerns into the paper. She also had a vital role in assisting with the newspaper’s political endorsement process, as there is an upcoming mayoral race that is crucial to the future of Detroit.

Fixing grammar and formatting, it turns out, is the easy part of the job. The Op/Ed team fact-checks every letter, whether it’s a comment on their own front-page story or a concern (like the old building) they’ve never heard of.

“Fact-checking international issues can be hard, because there aren’t always sources,” Givens explains. “People think you can find everything on Google, but that’s not always the case. Sometimes you have to contact people via email or by phone and wait for information. That takes time. Even in a letter, we have to fact-check prior to publishing it in a paper.”

The Opinions page may seem like the one place in the paper where bias is allowed, but Givens discovered that is not the case. Given the assignment to select a group of letters for the page, “the first time I did this, I only picked letters I agreed with,” she recalls.

“My editorial supervisor said, ‘Do the fact-check and if it’s correct, we’ll publish it,’” Givens continues. “I learned to put my own bias aside and not let it get in the way of my work. The Detroit Free Press doesn’t just serve Detroit, we have readers from all aspects of life, with different beliefs. I learned how to listen to people with different opinions, because each one is part of the public’s interest.”

Givens didn’t get the chance to write an article for the Free Press, but as part of the Op/Ed team, she assisted in preparing the paper’s voter guide for the mayoral and city council primary elections held in August. Along with more fact-checking, Givens did background research and participated in interviews with each candidate.

“The interviews were 45 minutes and I was allowed to ask one or two questions,” she says. Sometimes, this was a challenge: Givens had to stick to “voter issue” questions, even when her research raised questions that veered in a more personal direction.

“It was a privilege to be invited to participate in the interviews. I enjoyed coming up with thought-provoking questions even though I couldn’t ask all of them,” she says. “Sometimes it was difficult to keep my own feelings at bay while asking personal questions of the candidates, but that’s the essence of remaining unbiased while trying to convey information.”

Her internship may have just concluded, but Givens is quickly drawing reflections from her experience. “Reading the newspaper and listening to the radio were the only ways for people to receive mass information many years ago,” she says. “My grandparents and parents agree that families used to sit around the dinner table or on the porch with their newspapers in hand, discussing the ongoing issues of their community.

“A lot of people rely on the Free Press as their source of news, and a diverse, well-known, unbiased publication can distribute facts and information the same way other social media platforms do,” Givens adds. “You don’t have to agree with everyone, but people need to know what’s happening around them—locally, nationally, internationally.”

Albion’s Joseph Stroud Internship at the Detroit Free Press was established by his family in memory of the longtime Free Press editor who also served as director of the Ford Institute in the early 2000s. This paid internship provides a tremendous opportunity for one Albion student each year to work at the Free Press under the direction of senior newsroom staff.