Latinx Heritage Month: Aiming to Broaden the Conversation at Albion

Campus events celebrate culture and national independence, and emphasize the need for more opportunities to share—and understand—experiences throughout the year. 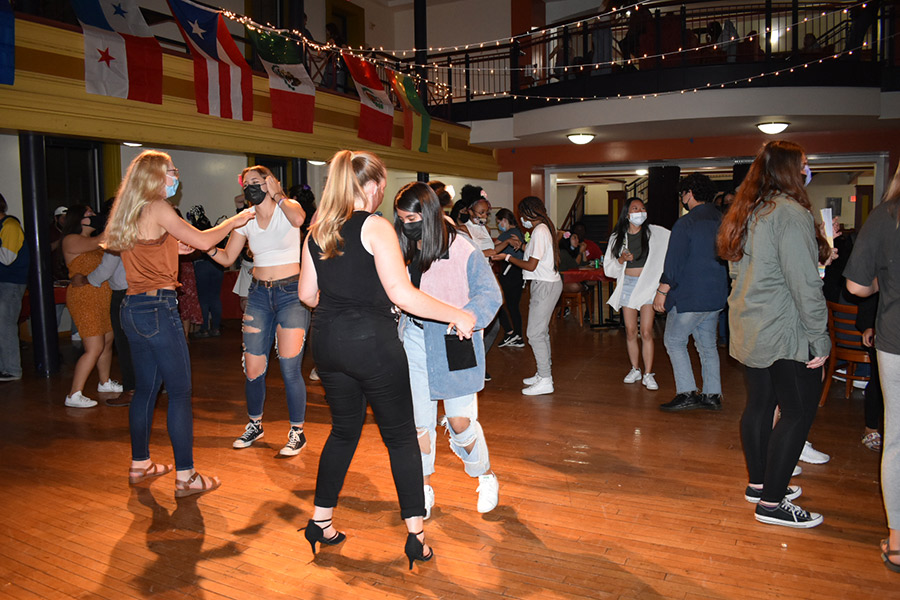 Salsa Night, one of many events on campus to celebrate Latinx Heritage Month, featured a live band in the Kellogg Center’s Gerstacker Commons.

Latinx Heritage Month recently wrapped up at Albion College, and it was a month full of activities.

As Latinx Heritage Month drew near, Paola Procopio, ’22, saw a gap in the festivities. There was not an opportunity for Latinx students to share their personal experiences, and Procopio set about changing that.

“Since I am currently enrolled in an internship researching and addressing inclusion and diversity issues regarding student language learners on campus, I was drawn to reach out to Director of Campus Life Jennifer Yawson to help organize the first main event of the Latinx Heritage Month,” says Procopio. “That event was significant because it was important for Latinx students to come together in a safe place where we could talk about our experiences and issues that we’ve come across as students of color in Albion College and even in the City of Albion.”

Procopio planned the event in a week, and Yawson remembers the event’s success. “There were five Latinx students on the panel with a student facilitator,” she says. “I thought the panelists were very honest about their experiences, and they did a great job building awareness around Latinx students’ experience at Albion, and the cultural transition and what that’s been like for them. It was five very different stories and five very different experiences.”

Procopio adds that she would like to see more time devoted to planning events like the panel next year. She says Latinx students don’t always feel valued at Albion College, and having an opportunity to share their struggles is essential for these students. “These types of events are utterly significant to help POC students feel acknowledged, admired and cared for,” says Procopio.

Procopio’s interest in Latinx culture stems from her personal identity. “I am invested in Latinx heritage because as I learn more about this subject, I am learning more about who I am and what has shaped me into the woman I am today. It is even more intriguing to me to learn about this heritage and culture because I was never really taught any of the history or given the chance to perceive facts of Latin America through an unbiased perspective throughout my 13 years in school until college.” She adds, “Learning about Latinx heritage would benefit the Albion College community by helping everyone feel comfortable and valued.”

José Garza, ’23, president of the Organization for Latinx Awareness (OLA), agrees that education is important. “My motivation and pride that help me invest in the Latinx Heritage celebration is being an international student from Mexico,” he says. “I believe that the Albion community could benefit from learning the Latinx heritage to increase diversity and understanding of the cultures and traditions of the Hispanic countries.”

An educational opportunity this month was the screening of the documentary Latinos Beyond Reel: Challenging a Media Stereotype, a film that discusses the ways Latinx people have been portrayed in the media. “It just made me really think and be more aware about experiences that people who are different from me have,” says Yawson. “It’s something that everybody should see. It was engaging and you walked away having learned something.”

Another popular event during Latinx Heritage Month was Salsa Night. Yawson estimates that 150 people attended, and many students dressed up.

“My favorite memory from the Latinx Heritage Month was definitely Salsa Night,” says Garza. “I was excited to see many people from different backgrounds reunited with the rhythm of the Salsa, Cumbia, Merengue and Bachata that represents our culture.”

Procopio enjoyed Salsa Night as well. “It was amazing to see different people come together, and willing to learn new dances significant to our Latinx community,” she says. “Dancing is always fun, so it was so entertaining and stress relieving.”

Dr. Elizabeth Barrios, assistant professor of Spanish, was consulted in the planning of the month’s events. Barrios is a scholar of Latinx heritage and her interest stems from the complexity of the issues involved.

“The main reason I am interested in the topic of Latinx heritage is the blatant misinformation about Latinx cultures in the United States,” says Barrios. “Government, media and educational institutions in the United States have a blind spot when it comes to the actual complexity and diversity of the peoples and cultures that are labeled as ‘Latinx/Hispanic’ in this country.”

Barrios points out that “the United States has a long and deep Latinx/Hispanic history, which only sometimes involves immigration. For instance, Spanish was spoken in what is now the U.S. before English was, and people to whom we would refer today as Latinx/Hispanic—a category that did not really exist until the 1970s—have been present in every major event in this country. Yet, time and again, we forget about this presence and legacy, in great part because Latinx/Hispanic identities do not easily fit the mold of mainstream understandings of U.S.-American culture and history.” Because of this, Latinx Heritage Month celebrations should take into account who they are celebrating to ensure that everyone is included.

Barrios says that, in the future, “We need to have more events that are inclusive of minority groups in or from Latin America: Afro-Latinxs, Indigenous communities, Asian-Latinxs, non-Catholics, non-Spanish speakers in the region, just to name a few. Sometimes it looks like the College, like much of the country, finds itself trapped in a mainstream understanding of Latinidad, which leads to the continual exclusion of many Latinxs. Admittedly, it would take more time and work to be inclusive of these different perspectives and voices, but I hope that we do so in the future.”

October 12 brought to campus motivational speaker Maximo Anguiano, an actor, athlete and executive director of the Adelante U.S. Education Leadership Fund. Anguiano speaks passionately about issues in the Latinx community and opened by saying, “I am here to broadly and vehemently claim that Heritage Month is every month.” Latinx people, he said, are here every day and deserve to be celebrated year-round. He went on to talk about his Latinx family and other notable Latinx people in history.

The month’s activities concluded with a fiesta de independencia on October 14, a celebration of all Latinx countries, cultures and people. The event included traditional food, dancing and music.

Ultimately, Latinx Heritage Month is crucial to supporting Latinx students here at Albion. And that support through participation is important to “advocate for, celebrate and educate students. That’s the reason why we do Heritage Month,” says Kristina Crawford, campus life coordinator.

It’s vital that all students feel valued and a sense of belonging at Albion College. Input and feedback from students, faculty and staff about Latinx Heritage Month and similar campus endeavors can spur action and positive change while fostering growth.