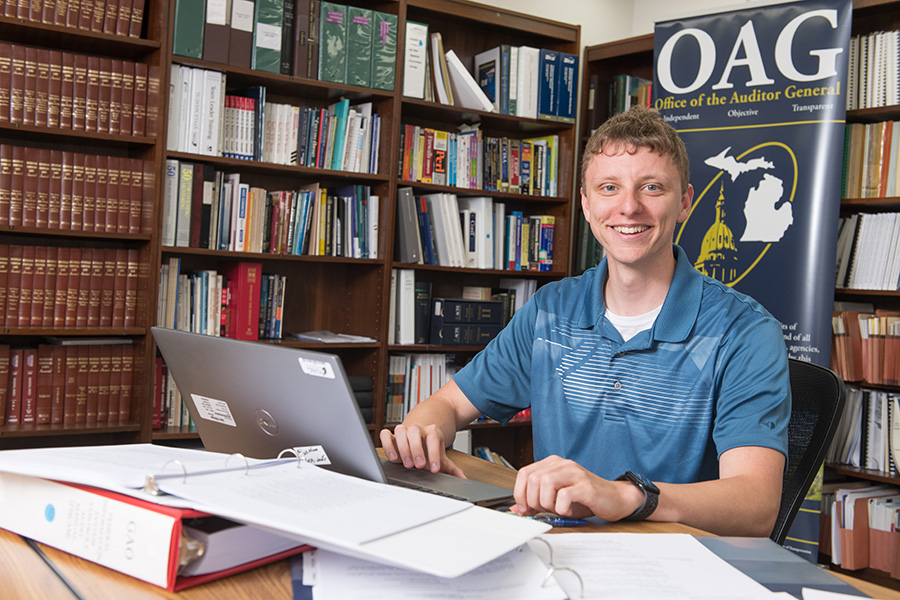 “I knew I wanted to be an accountant and be involved with audits,” says Brandon Luttig, who describes his summer experience at the State of Michigan’s Office of the Auditor General “very fulfilling.”

Considering he is an Albion College accounting major on a compressed academic schedule from a family of accountants, everything just adds up.

And while his parents are very proud of him, they do not necessarily want their youngest son to visit them at work.

At least not in his current official capacity.

Of course, his parents have nothing to worry about, but Luttig said his summer internship with the Michigan Office of the Auditor General can be a little awkward at times.

“People don’t like answering questions,” said Luttig, of Fowler, Mich. “Some can get short with you, but most understand why you are there.”

The auditor general’s function is to improve accountability for public funds and to improve state government operations for the benefit of Michigan citizens.

The short version is that they conduct audits for fraud, waste and abuse in state-related agencies.

“We go in and make sure that they have the right controls over systems and are doing things the right way,” said Luttig.

Luttig, whose internship is part of his concentration in the Carl A. Gerstacker Institute for Business and Management, works on a four-person team in the auditor general’s office. He is responsible for communicating with companies and analyzing data.

“We ask a lot of questions, and that takes some getting used to for some people because they have their jobs to do and then we are there asking a lot of questions,” he said. “It’s very fulfilling to make sure that all of the taxpayers’ money goes where it is supposed to.”

Luttig just helped with the completion of an audit on an enterprise data warehouse. His next assignment is connected to the Flint water system.

“From the start, Brandon seemed engaged and interested in learning what we do and the impact it has for the citizens of the state,” said his supervisor, Jose De La Rosa Rodriguez, audit supervisor for the auditor general. “He always has a positive attitude towards getting the work done and he is very receptive to constructive criticism. All in all, it has been a pleasure working with Brandon this summer, and I am certain that he will continue to grow professionally and will have a wonderful career wherever he goes next.”

Luttig said working with the Office of the Auditor General has been a great experience, both professionally and personally.

“Everyone has been great here,” he said of working in Lansing. “Coming into an internship can be intimidating, but here (the auditor general’s office) you can ask a lot of questions and they answer you.”

“I knew I wanted to be an accountant and be involved with audits, but I didn’t know what type of audit I wanted to do. Through this office, I have been able to do different types and have realized that I prefer performance audits,” Luttig said. “There is more opportunity to travel around the state.”

Luttig knew from an early age that he wanted to do something with numbers. It doesn’t hurt that it runs in the family. Both his father and mother are accountants and his oldest brother, Kyle, is an accountant as well. His other brother, Josh, is involved in a different kind of accountability. He is becoming a priest.

“Growing up, my brother Kyle was always talking about numbers,” said Luttig, adding that while there wasn’t a singular “aha” moment about his future, he realized that being good with numbers could be profitable.

“I started a lemonade stand when I was younger and I realized that I could make money,” he said. “I made 20 bucks.”

As a high school student, Luttig got a job as a dock worker at the local grain elevator.

“After my first year at Albion, I felt like I knew enough to ask them if there was anything I could do to help in the office,” he said, referring to the grain elevator company. “Now I do the accounts payable, transaction deposits and year-end inventory.”

Although numbers and accounting are part of the equation at home, Luttig said it is different when he tells others about his chosen profession or is hanging out with his friends.

“My friends are a little confused by my love of accounting,” said Luttig. “And then things can really go south when I tell them about my philosophy minor, because it doesn’t really add up.”

The philosophy piece was part of the requirement to get into the Gerstacker program, Luttig said. He liked the subject, so he continued with it.

One person outside of family who does understand Luttig’s chosen course is his Albion academic advisor, Laurel Draudt, director of the Gerstacker Institute.

“From day one Brandon has had a goal of working in accounting and becoming a CPA. He is on a fast track, which means he has to stay organized, focused and take on a heavy load each semester,” said Draudt.

“It’s been fun to see how his hard work is paying off within the experiences of his internship,” she said. “I’m proud of his excitement and willingness to learn. Brandon has represented the Gerstacker Institute and Albion College well.”

“Laurel has helped me a lot,” said Luttig. “She helped with all of the planning and I would not be here without her.”

After working through his summer break, Luttig said he is looking forward to enjoying his senior year at Albion and hanging out with his friends.

Luttig is on a pace toward accumulating enough academic units to graduate in three years. The busy course load does not allow much time for extracurricular activities, but he is involved with the Albion College Accounting Society and works at the Ludington Center.

When he does have free time with his friends?

“We usually just play cards, Euchre and Uno,” he said.

The certified public accountant test is the next big challenge for Luttig.

“I will be studying for the CPA exam and hopefully working here at the Auditor General’s office,” he said with a smile about his future.

That said, the most important number in Luttig’s future isn’t on a ledger or balance sheet, but on a calendar. He recently got engaged and is planning a wedding with his fiancée, Taylor. They hope to be married in October 2024.