From the Start, the Right Note Puts Albion Friendship in Motion 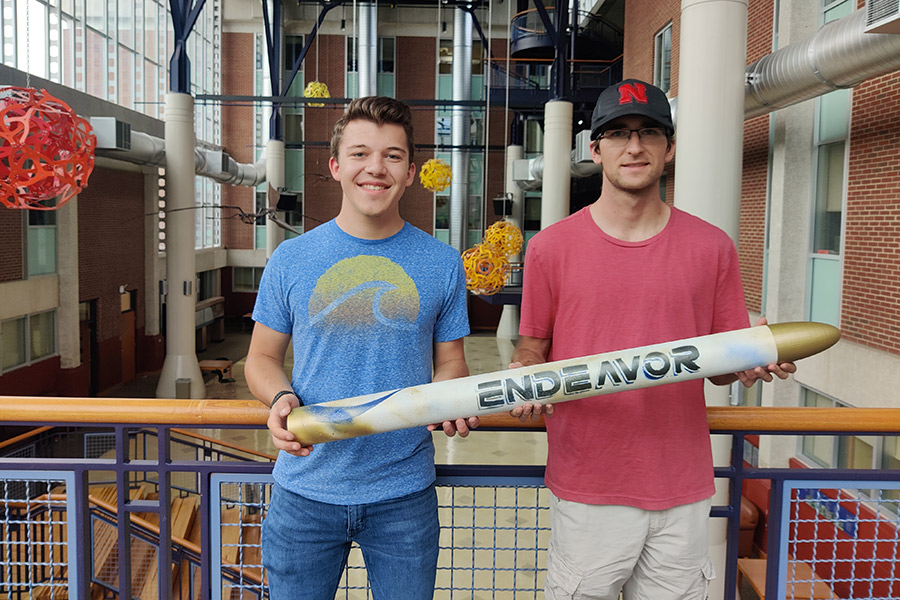 Daniel McGarry (left) and Nathaniel Jennings presented their research, titled “Thrust Vector Controlled Model Rockets,” April 21 during the 2022 Isaac Symposium. As their Albion graduation nears, each will also give a piano performance in the coming days.

Countless alumni can tell stories of lifelong friendships that began on campus. But even among those alumni, not many spent eight semesters living with the same person.

Seniors Nathaniel Jennings and Danny McGarry not only accomplished that feat, they’re also ending their Albion careers with events showcasing shared achievements in an unusual double major. The duo presented a physics research project April 21 during the Elkin R. Isaac Student Research Symposium. They will perform a two-piano arrangement of Gershwin’s “Cuban Overture” during McGarry’s April 27 senior recital. In between these two events, Jennings will appear April 24 with the Albion College Symphony Orchestra as the 2022 Concerto Competition winner.

In some ways, Jennings and McGarry had little choice in becoming friends. “When I applied to Albion, I was under the impression that majoring in physics and in music wasn’t that uncommon,” says Jennings with a smile. (In fact, the last such double major at Albion graduated in 2008.) A native of Nebraska, Jennings had met piano professor Dr. David Abbott through Kalamazoo’s Gilmore International Piano Festival, and chose Albion specifically as a place where he could pursue that double major.

“Danny and I exchanged a few texts over the summer, but we never actually planned to room together,” Jennings says. “I was filling out the residence hall application and I didn’t know anyone else, so I just put his name down. I didn’t even think to tell him before he asked me if I wanted to room with him.”

For his part, as the younger brother of a student at the time (Josh McGarry, ’19), Danny was familiar with Albion. He was leaning toward a physics major when he won a performance scholarship that required him to pursue a music major as well.

Given they share both a room and two majors, McGarry and Jennings have spent a lot of time together in class and adjoining practice rooms. Similar study habits and work ethic have led to a number of successful partnerships. They’ve performed together nearly every semester and, through the College’s Foundation for Undergraduate Research, Scholarship and Creative Activity, spent the summer of 2021 on a research project focused on rocketry.

They’re not the same person, of course. Jennings is a four-year veteran of the cross-country and track teams, while McGarry (following his brother) has been an anchor on the tennis team. This year McGarry has joined the Jazz Collective, while Jennings is doing directed studies in organ.

Ironically, Abbott—who teaches both of them—inspires a bit of the little competition they occasionally feel. “Sometimes, Dr. Abbott gives Nathaniel music that I would love to get my hands on,” McGarry explains. “We both get jealous of the repertoire the other one gets to play.”

And, as it turns out, the end of their Albion careers may not be the end for the roommates. Both are applying to aerospace engineering programs for this fall. While they’re not applying to all the same schools, there’s still a chance they could find themselves in the same city next year.

“We made it work over the last four years, and we’ve worked very hard to get where we are,” McGarry says. “I don’t see why we couldn’t do it again.”

Nathaniel Jennings will graduate in May with a bachelor’s degree in music performance and combined-engineering physics with a minor in applied mathematics. Jennings is the child of Molly and William Jennings of O’Neill, Neb., and is a graduate of O’Neill Junior-Senior High School.

Daniel McGarry will graduate in May with a bachelor’s degree in music performance and combined-engineering physics with a minor in applied mathematics. McGarry is the child of Bill and Sharri McGarry of Macomb.