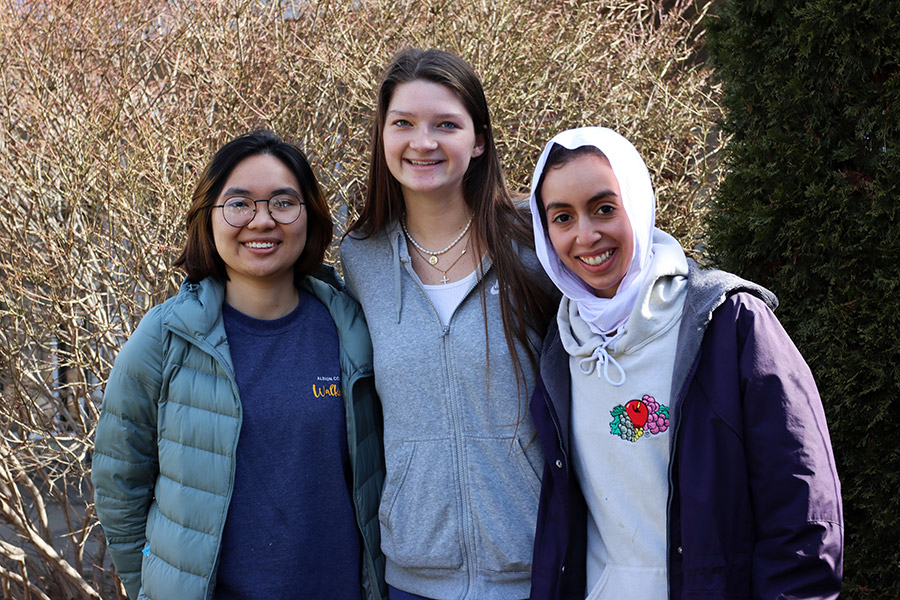 “Math isn’t hard. People like to make it sound as if math is the most difficult subject in the world. It is not. It has been studied by different civilizations thousands of years before us.”

Those are words from Tselmeg Mendsaikhan, ’22 (who goes by T), a finance and mathematics major with an actuarial emphasis, who recently had the opportunity to put his appreciation for math on display.

For approximately 20 years, Albion College’s mathematics students have entered the Mathematical Contest in Modeling (MCM), a global undergraduate and high school competition managed by the Consortium for Mathematics and Its Applications. This year, it started at 5 p.m. Thursday, February 17 and ended at 8 p.m. Monday, February 21. For 99 hours, students spent the weekend choosing from six questions, creating a mathematical model, and writing a paper together to present to the judges.

Dr. Darren Mason, professor of mathematics and faculty coordinator of the teams, explains mathematical modeling as “a mathematical framework that approximates a real situation, and the solution of that model helps you understand what you should do, what you shouldn’t do, or gives you a projection into what happens in the future.”

A familiar example, he says, are COVID-19 projections. Each is based on a mathematical model, attempting to predict what will happen next.

Mason says the problems the students spent the weekend solving are a reflection of reality.

“You can look at those six questions and you can see that every one of those questions was written in English, no symbols or any of that kind of stuff in the question, because life in the real world is a mathematical modeling problem,” he says.

Mendsaikhan agrees that math is applicable to everyday life.

“When people are going into math classes, they should focus on the theories and what it can be used on, and from there when you see the applicable side of things, you start to appreciate math more in the sense that you feel like you can use it anywhere,” he says. “People should take at least one class and see how interesting of a subject it can be.”

For Mendsaikhan, math is not only relevant, but enjoyable, too. The weekend competition, though intense, was fun.

Muñoz, a physics major with an applied mathematics minor, enjoyed the competition, as well. Her favorite part, she says, was working with her teammates and being able to spend time with them in a fun, yet more academic setting. 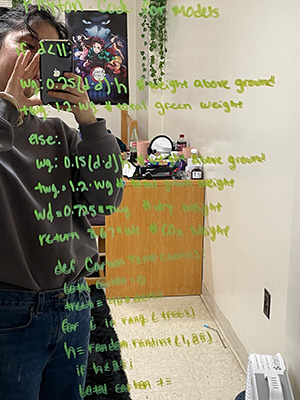 Karina Muñoz, ’24, wrote out a math problem on the mirror in her residence hall room.

Muñoz and her teammates spent days holed up in her room, working out the problem they chose.

“I don’t have a whiteboard in my room, but my entire mirror is filled with calculations and ideas,” she says.

The weekend was not without its challenges.

Kamari, a biochemistry major with an applied mathematics minor, says, “I think the most challenging part was doing math with no variables given to you. That was a new way of problem solving for me.”

After all that effort, the results were rewarding, Kamari says.

“It was fun seeing our model come together and knowing where we started from, which was not really knowing anything, and then being able to get to the point where we fully understood what we were doing and could explain it to others,” she says. “It was also fun just being able to spend the weekend with my team.”

This was Kamari’s first year participating in MCM, but she is certain it won’t be her last.

“I’m glad I had the experience of it this first year, and I’m excited to do it again next year,” she says.