The Marilyn Crandell Schleg Archivist and Special Collections Librarian is the new director of FURSCA, one of Albion’s signature programs. 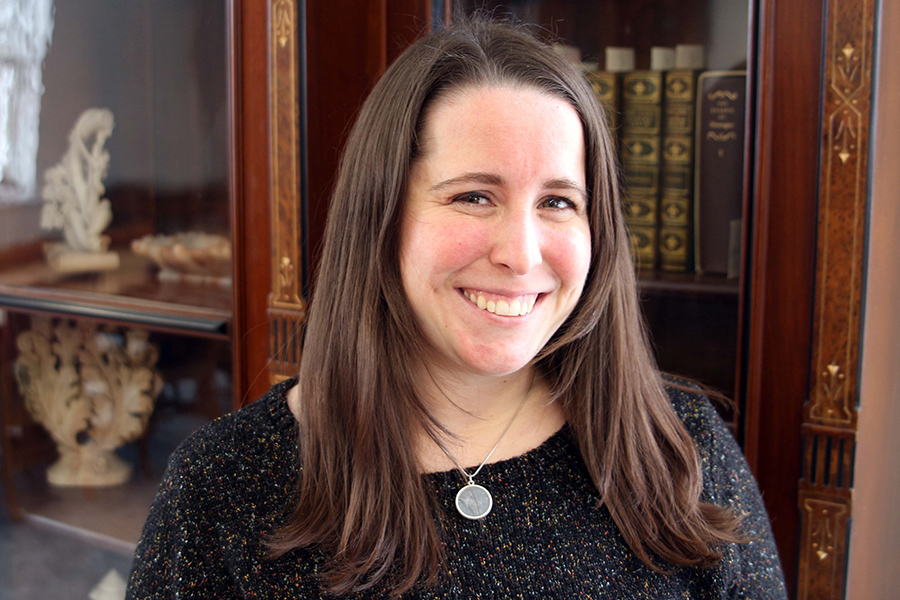 FURSCA Director Elizabeth Palmer says a student’s work before their actual research is just as crucial, describing the project-proposal process as “similar to a grant proposal or a research proposal that one would do in an actual career.”

Elizabeth Palmer, ’10, after returning to Albion in 2019 to serve as the College’s archivist and special collections librarian and archivist of the Michigan Conference of the United Methodist Church, is taking on an expanded role as the new director of the Foundation for Undergraduate Research, Scholarship, and Creative Activity (FURSCA).

In the FURSCA program, students plan and complete a research project, working closely with a faculty member. Summer research projects receive funding. Palmer says, “I think it’s one of the more unique opportunities that students have on campus, to be the researchers themselves and to really take direction on a project.”

Palmer has served on the FURSCA committee for two years. “I have really enjoyed it so much,” she says, “and that’s probably the biggest reason why I decided to apply for the director position: because it’s a lot of fun and very encouraging to see the creative things that our students are doing.”

After her time on the board, becoming the director just made sense. As an archivist, Palmer says, “My job is assisting people with their research and sometimes completing it for them, so it is a big part of what I do.”

She says she enjoys “the breadth of how many different types of projects there are,” pointing out that when people hear “research” they tend to think of science, which does encompass quite a few FURSCA projects, though many are from unexpected disciplines, like English or art. Last summer, projects included a community fridge, a disc golf study, and a poetry project.

“It’s very impressive to see the wide variety of things that are happening during the summer,” says Palmer. “From building and launching a rocket to making a book out of a teapot—it’s pretty incredible.”

Continuing Associate Director of FURSCA Renée Kreger says, “I have been very lucky to work with such wonderful directors in the past, and Elizabeth is going to be great.” She adds that she knows any changes Palmer makes “will be well thought-out and benefit all students involved in FURSCA research.”

FURSCA is a great opportunity to help prepare students for future research once they leave Albion, Palmer explains. “The [FURSCA] proposal process is really similar to a grant proposal or a research proposal that one would do in an actual career, and the fact that we can give them a good sounding board, to be able to do that I find really important,” she says. “Just to see the outcomes of all of their projects and their research is really fulfilling, as well.”

Palmer fondly remembers her own experience as a student at Albion. She says she made lifelong friends and even met her husband here. She says, “I really learned a lot about who I was as a person and the impact I wanted to make on the world.”

Coming back to Albion as an alumna has had its perks. It was convenient, Palmer says, to already be familiar with campus. Even better, though, is the opportunity to become a colleague of her former professors. “I am really excited to be working with Dr. Lia Jensen-Abbott,” Palmer says of the new director of the Prentiss M. Brown Honors Program. “She was one of my favorite professors and mentors. I’m looking forward to this working relationship with her because Honors and FURSCA do work closely together.”

Palmer enjoys her job as the College’s archivist. “I love that I get to learn something new every day,” she says. “I truly enjoy helping people with their research, because it is exciting when you find that one little nugget of information that is the last piece of the puzzle, or something that somebody was trying to figure out for a really long time. It’s nice to be able to be helpful to other people and find that answer that they were looking for.”

Palmer encourages that same curiosity in students in her added position as FURSCA director. She says she wants anyone with an idea for a project to talk about it with her or anyone on the FURSCA committee.

Applications for summer FURSCA projects are due at noon, Feb. 11. “We just want everyone who’s interested to give it a try,” Palmer says.