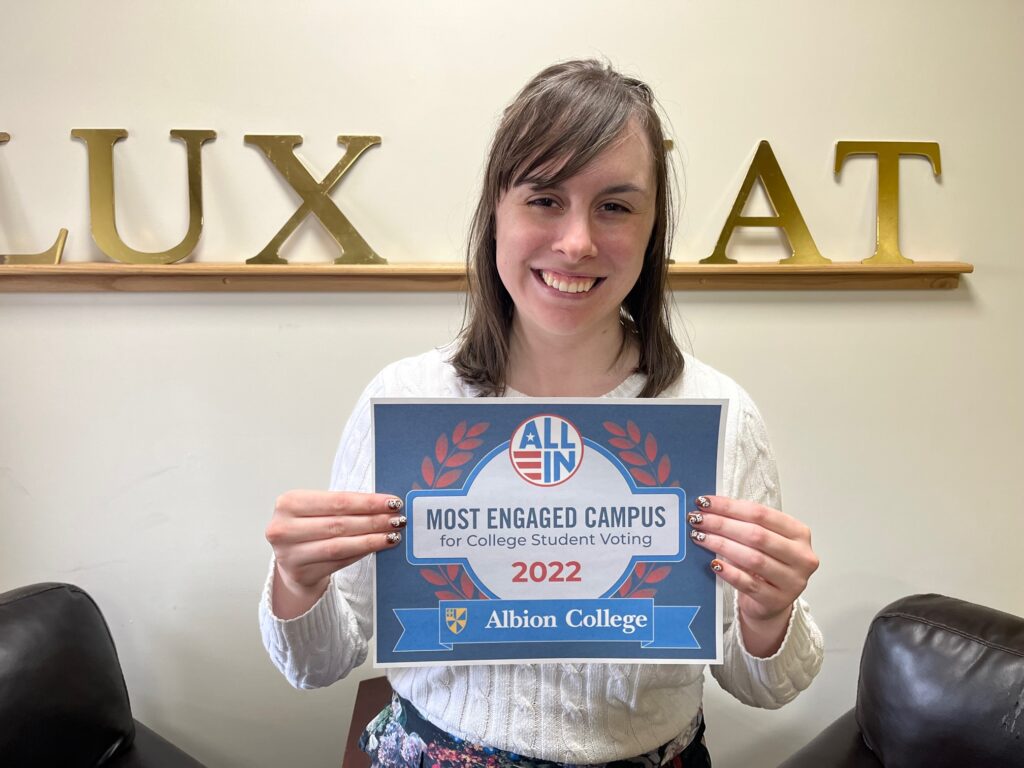 It wasn’t the hue of the wave in the recent election that excited Elizabeth Netcher, assistant director of campus life at Albion College.

It was the wave itself that made her smile.

“The younger generation turned out for this election,” said Netcher, who leads Albion College’s non-partisan effort to get college students to vote.

Albion College’s student voter turnout rate has gone from 27.7 percent in 2018 to 61.7 percent in 2020. The results of that participation will not be known for this election until next year, according to Netcher.

For their efforts in helping to increase voter participation, Netcher and her team of coalition members across campus earned the honor of 2022 ALL IN TO VOTE “Most Engaged Campus for College Student Voting.”

ALL IN TO VOTE is part of the ALL IN Campus Democracy Challenge and is a campaign to increase college voting nationally. The organization provides information to college students across the country about how to register to vote, how to vote by absentee ballot and how to become a poll worker.

Washington Monthly put Albion College on its list of America’s Best Colleges for Student Voting. Albion College also was honored with the “All Voting is Local Campus Award” by the Campus Vote Project.

The Washington Monthly list recognized 230 schools out of a total of 850 that received consideration. Albion College was the only Michigan Intercollegiate Athletic Association school to make the list among the other 14 Michigan colleges, universities and community colleges.

All Voting is Local is a non-partisan organization that focuses on swing states such as Arizona, Florida, Georgia, Ohio, Pennsylvania, Michigan and Wisconsin.

“It’s really about providing information to the students so they are empowered to vote,” said Netcher.

When Netcher arrived at Albion College about a year ago, there were efforts across campus to turn out the vote, but it was a patchwork approach with several different campus organizations and departments doing it.

Netcher said that one of the most common issues with college students engaging in the election system is not getting them registered, but making the connection to get them to the voting booth after they register.

“It is a follow-through issue that we have,” she said. “In the 2020 election about 80 percent of our students registered to vote but the turnout was not even 60 percent.”

Another challenge is that most college students vote using an absentee ballot because they are not in the home precinct or even their home state. The rules from state to state can be very different.

“Every city clerk does it differently,” said Netcher of the absentee process. “Some require that you have an excuse to vote via absentee ballot. Michigan is a ‘no excuse’ state, which means anyone can vote absentee.”

While this election cycle is over, Netcher and her coalition are already gearing up for the next election in 2024.

“We will catch our breath and see what worked and what didn’t and then start working on 2024.”