Nicknamed the “mile-a-minute weed,” the destructive vine has found a home at the Whitehouse Nature Center, and the battle is on to make sure it doesn’t get too comfortable. 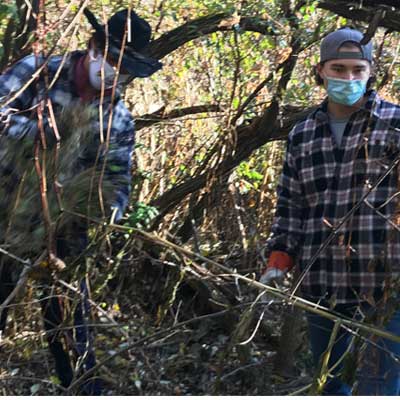 Tristan Ellis (left), ’21, and Colton Wiskur, ’22, go about the task of removing persicaria perfoliata, also known as mile-a-minute weed, from the Whitehouse Nature Center. The invasive weed has popped up in several spots on the property and, so far, it’s the only place it’s been found in Michigan.

“It wasn’t the first idea I had,” said a smiling Colton Wiskur, ‘22, a kinesiology major from Clio, Mich., on how he was spending a valuable weekend morning. “But anything we can do to help this place, I’ll do.”

And so the battle was joined. The location was an expansive, relatively secluded field full of plants, grasses and trees in the throes of late autumn inevitability at the Whitehouse Nature Center. And the enemy? An invasive weed, known officially as persicaria perfoliata, but more commonly referred to as a “mile-a-minute weed” for its relentless and rapid growth during the summer.

“That may be a bit of an exaggeration,” said Albion biology professor Doug White. “It’s more like four to six inches a day. But it is nasty stuff.”

White discovered the weed by accident this summer while he was tending the wren birdhouses at the Nature Center.

He had walked the same path every day for weeks but on this day he noticed a peculiar, triangle-shaped vine with purplish blue berries tangled in with other bushes.

“I saw this colorful fruit and I didn’t know what it was,” he said.

White took a photo of the strange plant and sent it to fellow Albion professor and plant expert Dan Skean, who could not identify it either. But White did his homework and finally tracked down and identified the weed, and the state’s Department of Natural Resources confirmed it. DNR officials also added that the weed, native to China, Japan and the Philippines, has been on its “watch list” as an invasive species.

It is believed the weed, also known as the tearthumb, was brought to Albion by birds who ate the berries and then deposited them in the field. Already spotted in 15 other states, its appearance at the Nature Center is the first in Michigan and Center Director Jason Raddatz has recruited student workers to deal with it.

Though this is the time of year it is dying, it’s an annual plant that will return next spring and continue its methodical growth that, eventually, will overtake native plants and trees. It’s believed the weed has been on site for several years but it was never noticed until this summer. 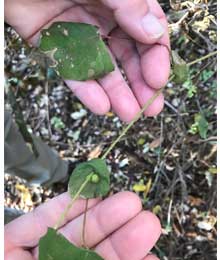 The mile-a-minute weed is distinctive for the berry that grows through its leaf. Though not widespread at the Nature Center, the goal is to make sure it doesn’t spread any further.

And though the weed is not widespread throughout the Nature Center grounds, for the past several weeks students have been locating the vines with their smartphone GPS apps and removing it.

“It’s been going well,” said Lucy Nevrly, ‘23, an English and art history major from Downers Grove, Ill., who has been out several times pulling the weed. “It feels like we’re making progress and it’s nice to feel like you’re getting things done. And to preserve something for people years from now I think is really important.”

Jackie Best, ‘23, an international studies and French major from San Diego, Calif., began working at the Nature Center this semester and answered the call when Raddatz sought volunteers to eradicate the invader.

“It’s definitely a big project and I think it’ll take a while before we get it all,” she said. “The problem is it’s hard to find, especially since it’s changing colors.”

And because the vines are covered with sharp burrs, it has made the work that much more difficult.

“We wear gloves but the burrs are kind of annoying,” she said. “I did not expect that. I just thought we were picking up vines.”

But even when the work this fall is done, the task will continue because, White said, the weed has found a home and it will take more time to not only eradicate it but collect the seeds that would allow it to spread.

Raddatz said the weeds will be treated with pre-emergents (which will deny germination of seeds) and surfactants, which improves the penetration of an herbicide. As well, goats may be brought in to eat the vines and, if nothing else works, a controlled burn might be needed, though he said that’s a last-resort option well down the road.

For now, he has drafted his weed warriors and is hopeful that will do the job. As well, it offers another learning experience that goes well beyond the classroom.

“This is a living lab,” Raddatz said. “This is exactly the kind of opportunity the Nature Center provides to students every day.“