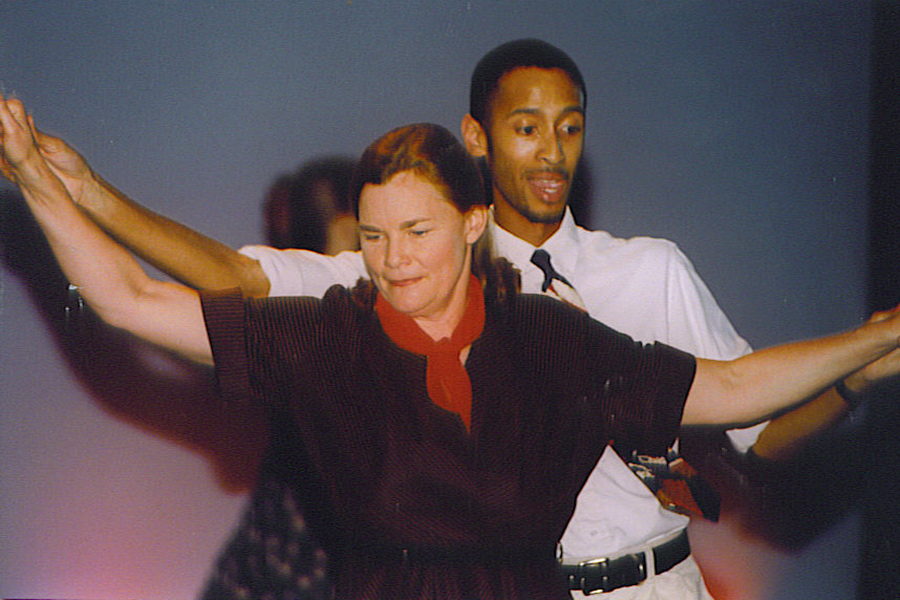 Albion’s beloved dance instructor Melissa “Missy” Blair Wyss passed away June 21, the day after her 79th birthday. She was preceded in death by her husband, English professor emeritus Hal Wyss, and daughter Laura, and is survived by daughter Trudy Wyss.

Beginning with an invitation to teach one physical activity class in the 1970s, Wyss founded Albion’s dance program, which grew into an academic minor and set of elective courses that involved 100 students each semester. Wyss organized an annual spring dance recital and worked with the Department of Theatre to choreograph dances for many productions.

While Wyss enthusiastically worked with new and beginning dancers, she was equally passionate about exposing her students and the community to the country’s finest artists. She developed friendships with noted choreographer Barbara Selinger and dancer John Parks, who both visited Albion many times as a guest artist or choreographer. Parks even helped bring the renowned Alvin Ailey Company to perform in Albion.

“Missy brought these world-class artists and she always made sure to involve them with the local schools,” recalls former Albion swim coach and close friend Keith Havens. “These were always well received by the community. She brought some wonderful programs.” 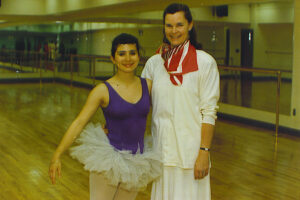 Wyss’ dedication to her students led to the dedication of Kresge Gymnasium’s Ferguson Dance Studio in 1989.

“I knew I wanted to dance in college but never thought I would continue after that,” says Kristy Clement Gill, ’07, who gained entry to a competitive graduate program with only a dance minor. On top of the choreography, performance and instruction experience gained at Albion, she added, “Missy made sure I had a dance internship in New York and a kinesiology independent study. I had that in my repertoire to go to a grad program. I felt very prepared when I went to grad school.”

Gill noted that Wyss used the same unique vision to craft a program of excellence for all students.

“Missy gave students so much opportunity to do choreography and create a piece,” says Gill. “In my experience, in a lot of programs you see the student’s work and it looks a lot like the teacher’s. Missy helped each person discover their potential and how to make their ideas into reality. The more I learned about other programs or would see other student programs, Albion’s program was very special.”

For the past several years, Gill and Wyss worked to compile an audio and visual archive of the dance program, work that Gill will continue. “We had so much to work with, and then when Missy moved out of her house, we found even more stuff,” Gill says. “I’m in touch with a lot of Missy’s former dancers, and whenever anyone brings up the dance program, everyone says how much it meant to them. It was important for Missy to include everybody and mix art forms and to bring together different cultures and involve the community. This project will illustrate that.”

Beyond the Dance Studio 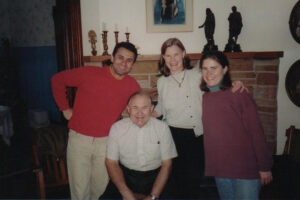 Roy Umana, ‘93 (left), became close friends with the Wyss family (including Hal, seated, Missy and Trudy) and welcomed them to his family’s Costa Rica home on multiple occasions.

Wyss’ first long-term contribution to Albion was to establish the women’s swim team. She remains the only woman in Albion history to coach a men’s team, serving for two years as the men’s swim coach.

“At our house, it is not a birthday without either Missy’s angel food cake with chocolate whipped cream frosting or her carrot cake. One of her favorite students shared a Costa Rican black bean recipe that I also still use,” adds Sue Havens, reflecting on the Wyss family’s impact on the Havens family. “We loved Missy and Hal’s interest in the students and learning from them. And Missy would hold dance lessons in the Kellogg Center on Friday nights. All who attended learned to salsa, Lindy Hop and waltz. Missy was so patient and encouraging. We laughed and danced. We weren’t destined for Dancing With the Stars but we had fun.”

“She made me shine in all endeavors,” says Roy Umana, ’93, reflecting on a relationship that started when he enrolled in Wyss’ Ballroom Dance course in 1990. Umana took several classes with both Missy and Hal, but was still surprised when the Wysses accepted his invitation to visit his family in Costa Rica in 1993. The Wysses eventually made numerous trips to Costa Rica, spending time with Umana’s family and friends. Umana lived in New Jersey for several years and saw the Wysses when they visited daughter Laura in New York City, as well as on numerous trips they made together to the Stratford Shakespeare Festival in Ontario.

“I am so glad part of Hal’s ashes are here in Costa Rica. Missy’s will be next to Hal’s,” Umana reflects. “We started in Albion, but our friendship grew and stays in ‘the rainy season,’ ‘in the cloud forest,’ in my family, in my life.”

A memorial service for Missy Wyss is scheduled for September 3 at Albion First United Methodist Church at a time to be determined. Read the family obituary for more on Wyss’ life and impact.

Kristy Gill, ’07, is coordinating a dance alumni reunion event at Homecoming. It’s scheduled for October 7, 11 a.m. in the Kellogg Center’s Langbo Living Room. More information on this and other Homecoming festivities can be found at albion.edu/homecoming, under Schedule.