Her decades of dedication to health, safety and wellness at Albion and through the American Red Cross earned statewide recognition. 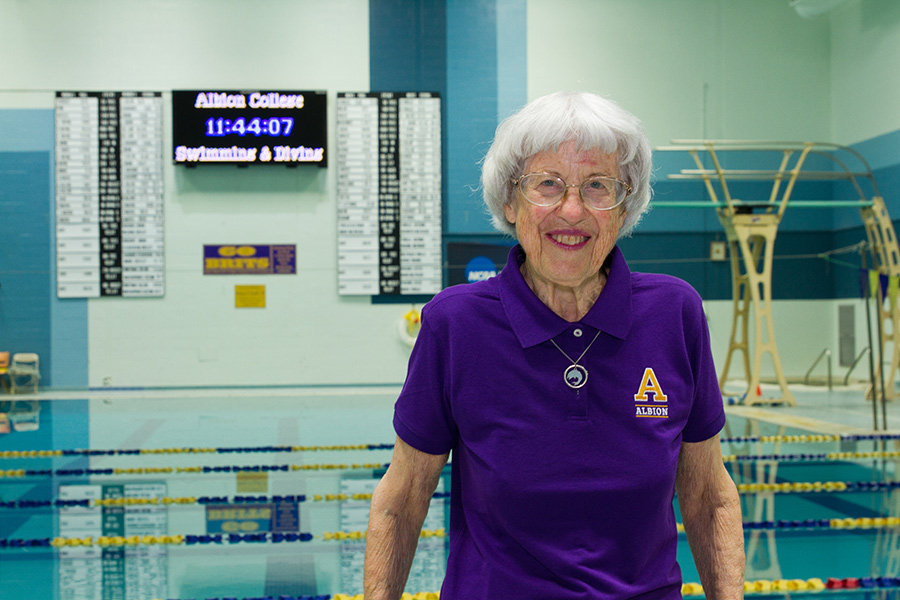 Betty Beese, who helped design the Dean Aquatic Center, touched countless lives in Albion. She died earlier this month at the age of 97.

From 1951 through 1985, Beese served as a member of the physical education faculty, teaching swimming, water safety, first aid and CPR to thousands of Albion students. She also coached for 46 athletic seasons across five different women’s varsity sports: synchronized swimming, archery, tennis, volleyball and softball. Her 1954 tennis team earned a Michigan Intercollegiate Athletic Association championship, and she was the founding coach for Albion softball in 1977.

Like many of her peers across disciplines, Beese had a reputation as an exacting, sometimes intimidating, teacher. Sue Dryer Dillery, ’80, recalls one day in a swim class when Beese was clearly frustrated with Dillery’s unimpressive breaststroke. Then “she got a call and when she came back to the pool, she was crying,” Dillery says. “I got out of the pool and she told me her dog had died, and she hugged me.”

At the time, Dillery thought the action was out of character, but she learned otherwise during the years she spent in Albion as an adult. “Betty cared so much for everyone, including her pets,” Dillery says. “She was a leader in our church. She did so much and was so independent, even in her wheelchair. I thought that was very cool and I admired her.” 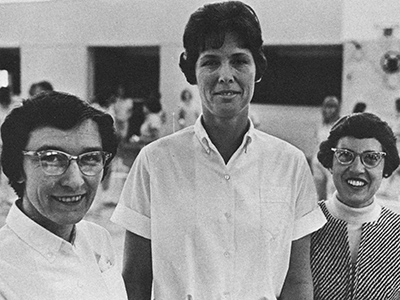 Beese’s early years in Albion were a “different time” for female faculty members, says neighbor and professor emerita of biology Dr. Dale Kennedy. Beese once told Kennedy that not only was she given a strict dress code for the classroom, Beese was also prohibited by her employer from going to Cascarelli’s Restaurant.

“Betty told me that at the time, Cascarelli’s was essentially a bar, and female faculty weren’t supposed to go, at least not alone,” Kennedy says. “For a long time, she would get her mailman to buy her Cascarelli’s peanuts, and he would bring them with the mail. After I heard that story, I often bought her peanuts for Christmas.”

Beese tirelessly pushed back against the College’s discriminatory policies, including one legendary showdown with the dean of women. “Betty’s tennis team was allowed to practice near the football field, but they had to change their clothes in Kresge Gym,” says Kennedy. This presented a problem, as the women practiced in shorts but were not allowed to walk across campus while wearing them.

“Betty was told that her team had to wear coats in order to walk across the Quad. She bought them all clear raincoats,” Kennedy said. “That was classic Betty.”

Physical education professor emeritus and longtime swimming and diving coach Keith Havens recalled that Beese enjoyed surprising students, even after retirement. “When I taught canoeing in the fall, Betty would sometimes be on the bridge in the Nature Center, throwing apples to the students. That made it even more fun.”

Havens remembers countless quiet hours paddling on the Kalamazoo River with Beese, who continued to prefer her single canoe even as her neurological condition made walking difficult. The recipient of numerous national titles in canoeing and kayaking, Havens is equally proud to hold an American Red Cross Betty Beese Water Safety Award for Excellence in Teaching.

“She was such a wonderful person,” says Havens, who is the co-namesake with Beese of Albion College’s boathouse. “It was a delight to be around her.” 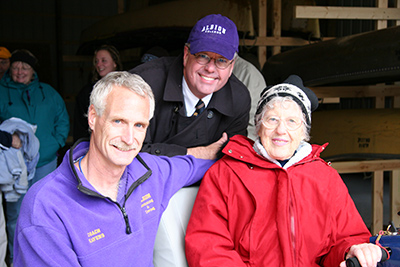 As a certified water safety instructor, Beese accompanied many field trips with Albion’s Girl Scout and Boy Scout troops. She was a founding member of the Albion Area Ambulance Service, serving as a board member, attendant, dispatcher, driver and instructor.

In 1995, the Michigan Legislature recognized Beese’s 50 years of service to the American Red Cross. During that time, she trained 376 Red Cross instructors, and certified 3,273 people in water safety and 4,186 people in first aid. She once saved an Albion College professor’s life by performing CPR in the men’s locker room.

“It was through Betty’s program that I earned my certificate as a Level-1 EMT,” says Interim President Joe Calvaruso, ’78, who continues to keep his certification current. “She was an outstanding friend and supporter of the College for many years, attending both campus and community events. Betty was a dear friend of mine. My heartfelt sympathies go to her many friends and family at this time.”

In retirement, Beese spent years teaching water aerobics in the Dean Aquatic Center, a facility she helped design. Havens notes that the pool’s shallow end, underwater viewing window and hot tub were all added by Betty, to enhance the pool’s usefulness as a place for children and beginners, coaches and athletes.

“Once, Betty told me she broke her foot, but it didn’t stop her from swimming,” Havens says. “She showed me how she could crawl to the end of the diving board, drop into the water and roll over on her back, all without getting that foot wet. She loved that pool.”

Gardening was another lifelong passion that Beese pursued, even on the grounds of her assisted living community and in her room. “My Vascular Plants class over the years included Betty as a volunteer, who carted students in her van on field trips, and Betty as a teacher, who gave excellent tours of her garden to our students,” says biology professor emeritus Dr. Dan Skean. “Betty always allowed me to use her garden for fresh specimens for my final exams.”

Just as she did as a water safety instructor, “Betty shared her love and knowledge of plants, and gave away plants to anyone who showed a modicum of interest,” Skean says. “She was a truly generous person in every respect, not just with plants and gardening, but with her time and contagious enthusiasm for life.”

Memorial gifts may be made to the Betty Beese Endowed Scholarship Fund.