An Albion College student duo is currently collaborating with 23 other students from community colleges, colleges and universities statewide to determine and implement recommendations to improve voter education and engagement among young people on Michigan’s campuses.

When Secretary of State Jocelyn Benson announced the formation of her department’s Collegiate Student Advisory Task Force in the spring, the group included Natasha Mwila, ’23, and Ant Neal, ’23. They were among those selected from a pool of nearly 200 applicants. 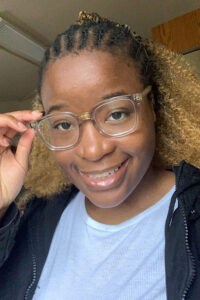 “I feel very grateful,” says Mwila, a sociology and public policy major from Livonia who is also a member of the Gerald R. Ford Institute for Leadership in Public Policy and Service. “It’s an honor to be chosen. We’re already doing so much at Albion, and I’m looking forward to sharing that with the other schools.”

Task force members will work with the Department of State and their home campuses, utilizing “their diverse perspectives and experiences to inform their peers of their voting rights, promote awareness of the newly redistricted electoral maps, and combat and dispel election misinformation on college campuses,” Secretary Benson said in the Department’s press release.

For Mwila, the task force is almost playing catch-up to her Albion extracurriculars. “I’m already in College Democrats and the Albion Voting Coalition and the Albion College NAACP,” she says, explaining that all three organizations are involved in voter registration and education. 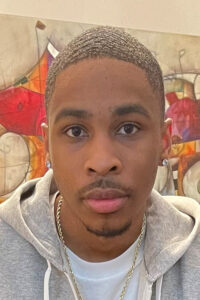 “I can get the stories and bring the voices of people who don’t vote,” says Neal, reflecting on his value to the task force. A residence hall student assistant from Chicago, the political science and history major and Ford Institute member is president of the Black Student Alliance and also serves on the Student Senate and the College’s Strategic Planning Committee.

“I’m in different environments, working with older students and younger students, staff members and faculty, and I get different points of view,” Neal says. “I talk to people who don’t vote, and I can also share my story of why people should vote.”

“Ant and I want to showcase what we’ve learned here and take it to other schools,” Mwila says. “We want to be part of making voting smoother for Michigan residents. I’m excited to be part of this work and see where it goes.”