Dr. Milkessa Gemechu’s recent articles in Foreign Policy and Al Jazeera detail his personal experiences with the conflict in Ethiopia. 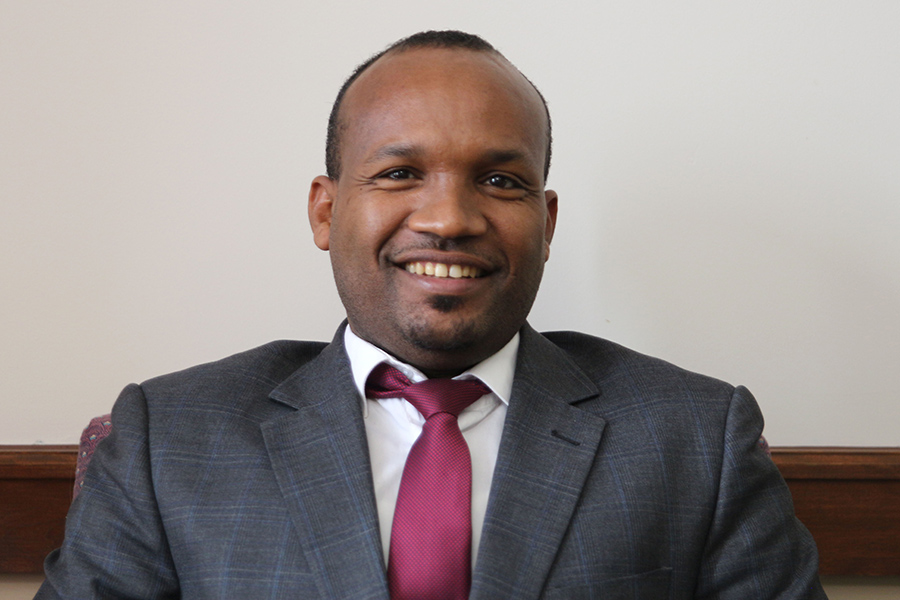 Dr. Gemechu, who arrived in Albion last summer, says of its residents: “They are a beautiful community. They are helpful people, they are kind people.”

Visiting assistant professor of political science Dr. Milkessa Gemechu’s journey to Albion was a nontraditional one.

“I came here as a threatened scholar,” he says. “My life was endangered back in Ethiopia because of my academic activities, social activism and my critiques against the government.”

Gemechu was able to come to Albion through a partnership between the Institute of International Education’s Scholar Rescue Fund and Albion College. He writes about his experience in Ethiopia before his escape and the country’s current political situation in a pair of articles published last month in wide reaching, well-regarded outlets.

Cristen Casey, director of Albion’s Center for International Education, is the liaison between the Scholar Rescue Fund and the College. “The Institute of International Education’s Scholar Rescue Fund provides opportunities for displaced and at-risk scholars to connect with U.S. colleges and universities,” she says. “As a result, the scholars and their families find a safe haven, and students at colleges like Albion learn about the world from internationally recognized professors. Albion College is lucky to be a part of this impactful and prestigious program, and we are grateful for scholars like Dr. Gemechu and their contribution to our campus.”

In fear of assassination, Gemechu secretly applied to the Scholar Rescue Fund and escaped from Ethiopia. His COVID-19 mask and hat, he says, concealed his identity during his nerve-wracking time waiting at the Ethiopian airport. Shortly afterward, his family was able to leave the country and join him in America.

One of his articles, “How Abiy Ahmed Betrayed Oromia and Endangered Ethiopia,” appeared in the globally recognized Foreign Policy. “The objective of that publication in Foreign Policy magazine has two purposes,” Gemechu says. “One is to let the Western powers, the international community, know and be aware of the unknown side of Ethiopia’s war against itself.”

He says that the Western world “tends to focus only on the conflict going on in the northern part of Ethiopia. The other largest chunk of areas in Ethiopia seems to have fallen on the blind spot and does not get attention.”

The second focus of the article, Gemechu says, is how the war in Ethiopia really started. The professor says he is uniquely situated to share this story, “because I was part of the government for two years. I had a front seat to see what was developing.”

Gemechu discusses in Foreign Policy his political activism and the anti-government critical voices that helped spur a new government led by a new prime minister, Abiy Ahmed, of which he then became a part. To his dismay, the new government of Abiy swiftly turned into a dictatorship by betraying those who brought him to power. Says Gemechu: “He declared war on the youth that brought him to power. He betrayed them, he betrayed us, he betrayed me.”

“I know Abiy’s political behavior very well, based on my evidence from Ethiopia as well as my own personal experiences with him,” says Gemechu. “I don’t think his national dialogue is going to end the crisis in Ethiopia. Abiy is not ready to deliver inclusive, sustainable national dialogue. There will be no negotiation at all in Ethiopia; Abiy does not believe in that. He brought the agenda to create confusion and thereby get preparatory time for his future vicious cycle of wars.”

The Al Jazeera article calls for a “genuine third-party neutral intervention,” whether from the United Nations or a neighboring country to facilitate the peace talks.

Though forced to leave, Gemechu says he cares deeply about his country and is invested in its future, inspiring him to write his articles. He is grateful for the opportunity Albion has provided. “I have to thank both institutions that saved my life, the Institute of International Education’s Scholar Rescue Fund and Albion College,” Gemechu says, adding that the College community as well as the people of the City of Albion have all been welcoming.

“They are a beautiful community,” he says, adding with a smile, “They are helpful people, they are kind people. I’m so happy now.”