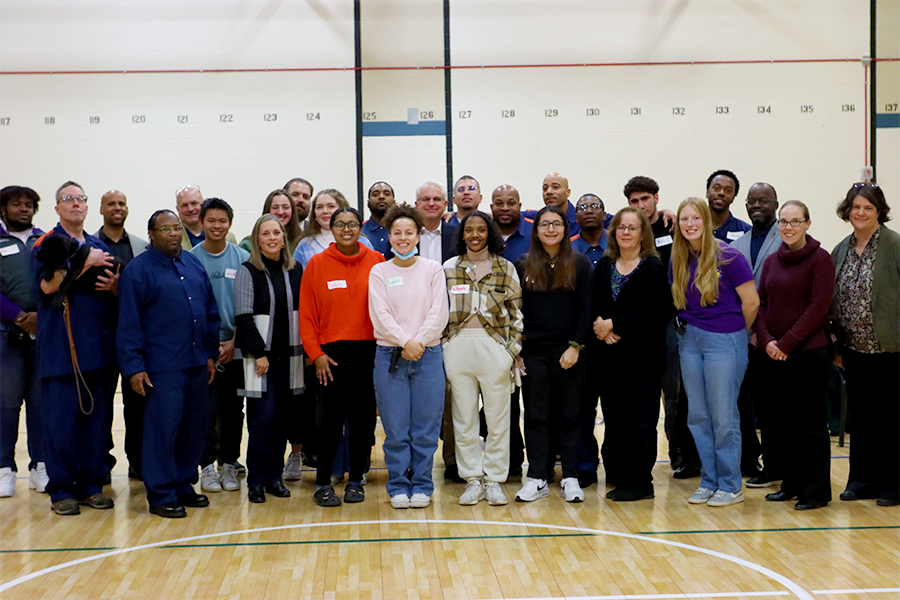 (EDITOR’S NOTE: To protect the identity of those incarcerated, only first names are used in this article)

Sammi Ahnen and 10 other Albion College students have never committed a crime, but they all spent 15 weeks behind imposing brick walls lined with razor wire at the Cotton Correctional Facility in Jackson.

“The first bus ride over here, it was so quiet and everyone was anxious and nervous,” said the senior political science major at Albion College. “No one knew what to expect.”

That uneasiness was shared by almost all of Ahnen’s classmates.

“I didn’t know how they would see us or what they would think of us,” said Cordaro, one of Ahnen’s classmates who is serving a 40- to 60-year sentence at the facility.

There was no visible uneasiness when the outside students from Albion College joined the inside students (those incarcerated at Cotton) for the Inside-Out certificate completion ceremony recently, marking the end of the course in transitional justice taught by Carrie Walling, faculty director of the Gerald R. Ford Institute at Albion College.

The only noticeable difference between the two groups during the ceremony in the educational center at the Cotton facility was that the inside students were wearing prison uniforms.

“Many barriers exist between inside and outside students,” Walling said. “The obvious physical one — prison walls — as well as many psychological and symbolic barriers. What Inside-Out does well, if not better than any other program, is to break down those barriers and help students find each other’s humanity.

“The Inside-Out Program promises a transformative experience for all involved,” Walling continues, who has been participating in the program for the past five year. “Based on the experiences of Albion College’s Inside-Out Program, that promise has held true for virtually all participants.”

The course is part of the Inside-Out Prison Exchange Program and Albion College is the only small liberal arts school in the state of Michigan participating in the program. Other schools include Michigan State, the University of Michigan and Wayne State University.

The Inside-Out program at Albion College was co-founded by Political Science Professor William Rose and Sociology Professor Scott Melzer. Rose, Melzer and Walling have been formally trained in the pedagogy of Inside-Out by its national program — the Inside-Out Center.

The program offers something additional to the inside students — hope. Zebediah, who is serving a life sentence, said he always wanted to go to college, but did not think he was smart enough. “And I didn’t have the money,” Zebadiah said. “This class gave me a chance to see the world and understand that I want to be a part of it. I am not able to be out there, but this has given me the opportunity to get educated and share with the young. I recognize now that I have to live up to my fullest ability and develop myself. I have to grow. I want to see a better part of me. I have a daughter and I haven’t had anything of value to give to her. I do now.”

The class provided different opportunities for each student, inside and out. Nicklas, an outside student, said, “The biggest challenge was the unconventional classroom. It forced us to engage in different ways and connect as humans. Everyone contributed to the discussion.”

“This was my first class,” Cordaro added. “It was long and a lot of work, but it made us better people and brought us together all together. It really did transform us.”

“This program teaches you to overcome uncomfortableness and to learn how to handle difficult situations,” said Cotton Correctional Warden Noah Nagy. “I just want to thank Carrie (Walling) and Interim President Calvaruso for providing this opportunity.”

“This is a program that changes participants at the foundational level,” said Calvaruso, ’78, who attended the closing ceremony at the facility with his wife, Donna. “It offers inside and outside students the opportunity to change their perspectives, think about situations through different lenses and work at solving problems through collaboration, not confrontation.”

Prison officials could not agree more.

“Education is a key to unlock a lot of things,” said Kyle Kaminski, legislative director for the Michigan Department of Corrections. “Education cannot be taken away. For the outside students you can carry this forward and be a change agent in the community.”

“In a normal college class you know most of your classmates and there are usually no disagreements,” Ahnen said. “In this class you are hearing from people you probably would never encounter out there. There are a lot of biases in the world. I think we need to get rid of stereotypes and get out of our comfort zones.”