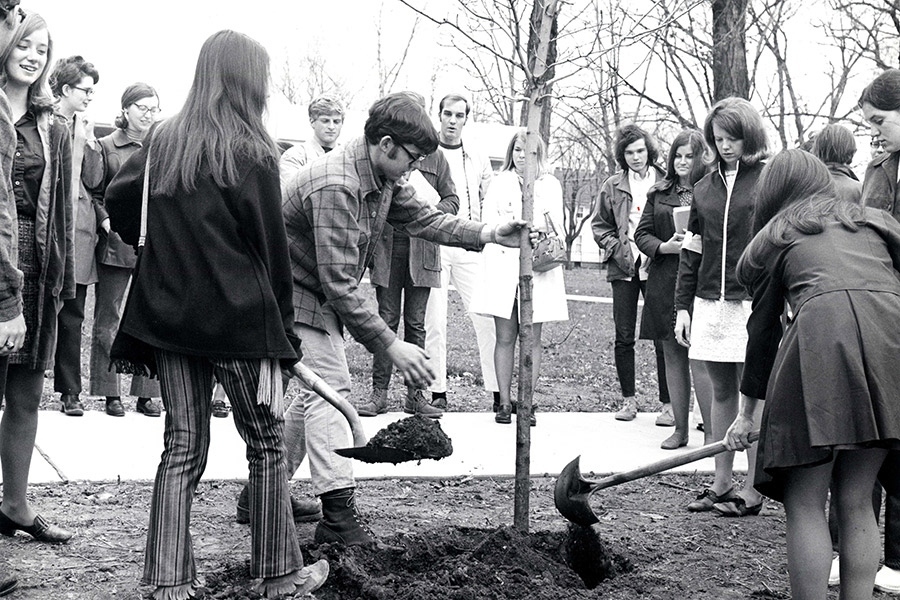 As an Albion College undergraduate in the late 1960s, Walt Pomeroy didn’t merely become interested in or show signs of what his future career might look like. He was fully on the path, doing the hard and even trailblazing work as a student leader whose efforts to highlight human environmental harm — and to do something about it — reached a national audience.

In April 1970, Pomeroy appeared prominently in a filmed CBS News report from Albion that became part of the television network’s prime-time special, “Earth Day: A Question of Survival,” hosted by Walter Cronkite.

From that first Earth Day, Pomeroy — who died May 24 in Pittsburgh, Pa., at the age of 74 — dedicated his career and life to environmental advocacy and leadership through a large network that included nonprofit organizations, elected officials and countless others who shared a passion for appreciating and protecting our natural surroundings. 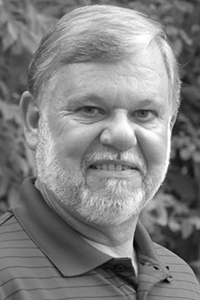 Throughout that time, the Albion geology major stayed connected with his alma mater. In fact, the bond strengthened.

“Walt’s love and support for Albion and the department was unwavering,” said Dr. Carrie Menold, professor and chair of Albion College’s Department of Earth and Environment. “Over the years he kept in touch, visited, shared his wisdom and contributed unfailingly to the department’s Lawrence Taylor Student Research Endowed Fund that supports students’ opportunities to conduct their own research.

“One of my last exchanges with Walt was about the new department name, Earth and Environment,” Menold said. (The Department of Geological Sciences was renamed in 2021.) “He was interested and had a lot of questions! Walt was an inspiring example of where an Albion education can take you.”

“His entire career in environmental protection had been set in motion by his experiences in Albion,” said Dr. Doug White, professor emeritus of biology and past director of the College’s Center for Sustainability and the Environment. “I’d met Walt a couple of times over the years when he visited campus to speak and socialize with faculty and students at [geology professor emeritus Dr.] Larry Taylor’s home. He was gracious and engaging.”

At Albion, Pomeroy helped found the student organization Save the Environment through Ecology (SEE). After Earth Day, he and advocates at other Michigan colleges and universities formed the Michigan Student Environmental Confederation, “lobbyists in blue jeans,” according to one newspaper.

A tribute posted on the PA Environment Digest Blog shared a 1999 quote from Pomeroy in describing that early experience: “Soon we made friends in the legislature on both sides of the aisle. We learned a day at a time. And since we were in the Capitol almost every day, our network of friends and supporters expanded from just student groups to a diversity of community, environmental and sportsmen groups.”

Among those Pomeroy eventually collaborated with over the years included U.S. Sens. Hubert Humphrey and Gaylord Nelson, and U.S. Rep. Morris Udall.

Shortly after graduating from Albion, Pomeroy worked for environmental organizations in Wisconsin and Michigan before settling in Mechanicsburg, Pa., in the early 1980s. He served for 17 years as a regional vice president for the National Audubon Society, and before retiring was the first executive director of the Pennsylvania Organization for Watersheds and Rivers.

Kirk Johnson, ’92, executive director of the Pennsylvania-based nonprofit Friends of Allegheny Wilderness, first crossed paths with Pomeroy two decades ago. Over the years, Johnson said, Pomeroy was a helpful sounding board for his wilderness-preservation advocacy work.

“Walt always had a lot of good advice for me, drawing on his decades of experience in environmental advocacy,” Johnson said. “He invited me to stay over at his home outside of Harrisburg when I was down in his area giving presentations about wilderness preservation to local Audubon groups. That Walt had such an important role in organizing the first Earth Day events at Albion was always an inspiration to me. He will definitely be missed.”

In retirement, Pomeroy was a member of multiple boards of directors of environmental organizations. He received Albion College’s Distinguished Alumni Award in 2010, and continued to visit campus in recent years. One such trip included a stop at the nearby home of classmates Rick Lange, ’70, and Barbara Lange, ’70.
“We had a pleasant, far-ranging conversation that included work experiences and family history,” said Rick, adding that their fathers were doctors in the Lansing area and knew each other. “Then he asked whether I knew what had become of a set of old hand tools that his dad gave to my dad. When we cleared out my parents’ place on Beaver Island, I ‘adopted’ some old woodworking tools and brought them home.

“So I brought them up from the basement to show to Walt,” Lange continued. “His face lit up with delight. The tools had belonged to his grandfather, and he had regretted not telling his father about his interest in them. Of course, I gave the tools to Walt.” 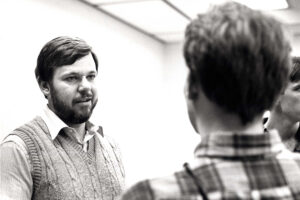 Pomeroy returned to Albion often, including here in 1986, to talk about sustainability and the environment with students, faculty and staff.

Dr. Wesley Dick, professor emeritus of history, joined the Albion faculty in 1968, retired in 2021, and across five decades crossed paths often with Pomeroy.

“We were together for the first Earth Day in 1970, for the 50th anniversary of Earth Day during the pandemic on an Albion College alumni Zoom connection, and numerous times in between when we invited Walt back to campus to speak at environmental symposia and in our classrooms,” Dick said. “Walt’s Albion College Earth Day and environmental passions laid the foundation for a distinguished career devoted to sustainability and protection of the Earth. With the current environmental crisis, his voice is needed more than ever. We honor Walt’s legacy by redoubling our efforts in protecting the fragile life-support systems of our planet.”