The ‘go-to’ resource is used in religious studies courses and classrooms at colleges and universities around the world. 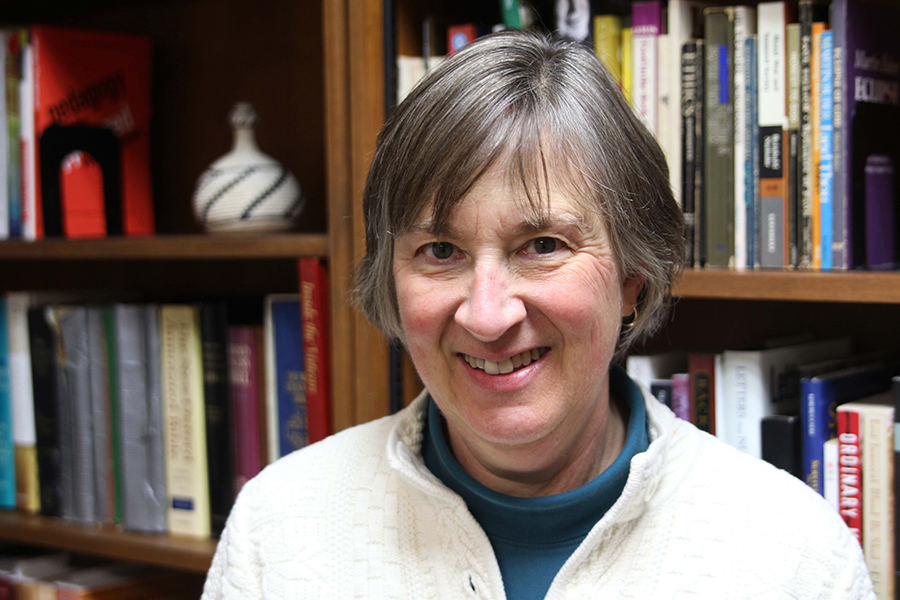 Dr. McWhirter is in her 16th year at Albion. She received her Ph.D. from Princeton Theological Seminary.

Dr. Jocelyn McWhirter, the Stanley S. Kresge Professor of Religious Studies, has written the “Introduction to the Bible” for the latest edition of the HarperCollins Study Bible.

The invitation “came out of the blue,” McWhirter says. She is active in the Society of Biblical Literature, whose members edit and annotate this particular study Bible. When the editorial board needed a scholar to write the introduction for a new generation of undergraduates, they thought of her. McWhirter completed it while on sabbatical last spring, and the book comes out early this year.

An academic study Bible, she explains, is different from a religious study Bible “with notes designed to enhance your religious experience. The introductions and notes in an academic study Bible give you historical details and explain customs that you’re not familiar with. If the New Testament writers are quoting or alluding to the Old Testament, it will point you to those references. It’s just really helpful to use in class.”

This will be the third edition of the HarperCollins Study Bible. The first came out in 1997. “I started teaching right around that time,” McWhirter says, “and I’ve used it in class every single semester I’ve been teaching, so that’s my go-to academic study Bible.” She adds that she is thrilled to be introducing a Bible that will be used in classrooms all over the world.

McWhirter’s “Introduction to the Bible” covers several topics, including the significance of the Bible for both Jewish and Christian traditions. It also focuses on historical and literary analysis, answering questions like, “What genre is this literature? What can we figure out about what the author is trying to get across and whom they’re trying to persuade within their historical context?”

The introduction, she says, “ends with an invitation to keep turning the pages and start reading the Bible, bringing your own perspective to its interpretation.”

McWhirter is no stranger to publication. A book she co-edited, Teaching the Bible: The Challenge of a New Generation, will come out later this year. McWhirter has also written two other books, Rejected Prophets: Jesus and His Witnesses in Luke-Acts (Fortress Press) and The Bridegroom-Messiah and the People of God: Marriage in the Fourth Gospel (Cambridge University Press). She is the author of several published essays as well.

McWhirter, whose interest in religion was sparked at an early age, spent her last three years of high school in Germany. “I noticed how different German Christianity was from Christianity in the U.S.,” she says. While she was fascinated by these cultural differences, she started her undergraduate studies with physics and calculus. But then, she says, “I took a course in religious studies. I just got hooked.”

For her, religious studies speaks to some of the same issues as physics. “I was interested in physics partly because of its big perspective on how things work,” she says. “And I think that religions also take a big perspective, although in a different way.”

McWhirter is involved in many campus programs at Albion. They include the Holocaust Studies Service Learning Project with its bi-annual trip to Poland (sadly canceled in 2021 and 2022, due to the pandemic). From 2009 through 2019, she taught the course in addition to her regular teaching load.

Other projects have also kept her busy. She was the founding director of the Newell Center for Teaching and Learning, which provides pedagogical support and resources for Albion faculty. McWhirter has also played a key role with Pathfinder, a grant-funded program that incentivizes students to write reflections on their activities, thereby gaining insight into their strengths and career aspirations. A member of Phi Beta Kappa, she serves as the senior faculty marshal at Commencement and other academic convocations.

“All these leadership, teamwork and strategic planning roles have enabled me to help make a difference for Albion’s students, faculty and staff, not to mention the Jewish community of Wroclaw, Poland,” McWhirter says. “To the extent that the College and its graduates have profited through Holocaust education, pedagogical development, PathFinder, What Matters to Me and Why Dinners, and mentor training, I’m exceedingly grateful.”

Add to that list her introduction of the newest HarperCollins Study Bible, and the impact it will have on countless students.