The professor and chair of Albion’s Department of Earth & Environment is one of 12 inaugural AGU LANDInG Fellows, and the only one from a liberal arts college. 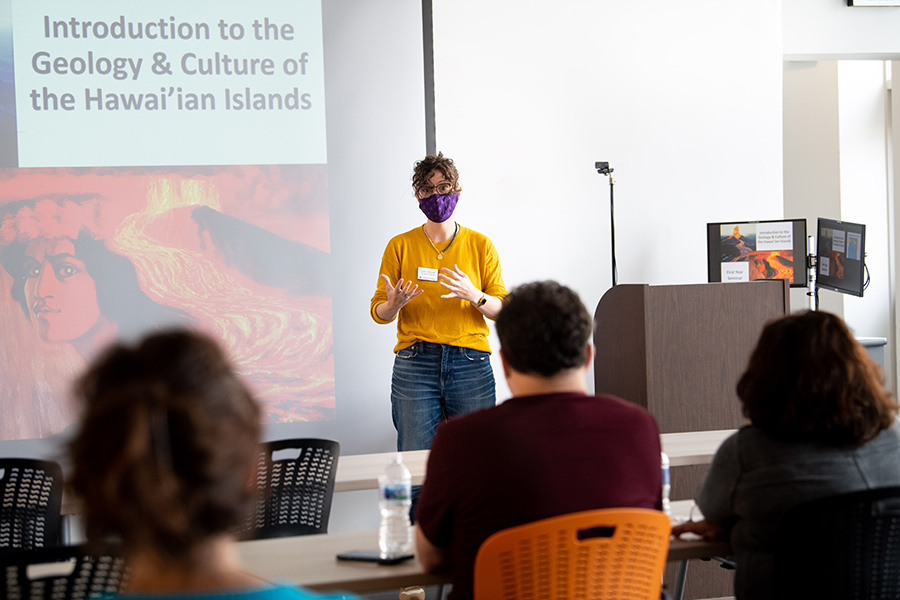 Dr. Carrie Menold taught a class in the Ludington Center on October 2 during Family and Supporters Weekend at Albion College.

Earth & Environment professor Dr. Carrie Menold was recently announced as an inaugural LANDInG Fellow for the American Geophysical Union (AGU), the nation’s largest organization for educators, researchers, and business professionals in the geosciences.

The 12 fellows for AGU LANDInG (short for Leadership Academy and Network for Diversity and Inclusion in the Geosciences) were chosen from department chairs and senior administrators nationwide who are already working to improve diversity, equity, and inclusion within their institutions.

Menold notes that she didn’t consider applying for one of the two-year fellowships until colleagues at other institutions pointed out that she met the AGU’s criteria as a change-making leader.

“There’s a tendency to underestimate what you’ve done as there is always more to do, but writing the application crystallized the progress we have made over the past few years,” she commented. “This award feels like a way to keep moving forward.” 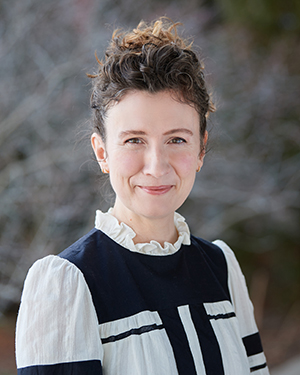 Dr. Carrie Menold joined the Albion College faculty in 2006. She is a petrologist who specializes in metamorphic petrology, geochemistry, and regional tectonics. Current research areas include North Qaidam, Qinghai Province, China; Tso Morari, Western Himalaya, India; and the Calidonides, in northern Sweden. Menold received her Ph.D. from the University of California, Los Angeles and her B.S. from the University of Michigan.

Among her colleagues comprising this first LANDInG Fellows cohort, Menold is the only member from a liberal arts college (nine are from research universities, one from a two-year college, and one from the Monterey Bay Aquarium). AGU will provide a stipend and funding for travel and cohort training. Additionally, each fellow’s home institution has committed resources in support of this innovative work, with the expectation that each fellow’s contributions will, in turn, be shared with other institutions.

Menold recalls that her formal work in addressing diversity and equity in the geosciences began with a “wake up” moment in 2017, when Albion’s then Department of Geological Sciences (now Earth & Environment) prepared its external review. “We were significantly less diverse than the campus,” she says, “and nationally, earth and space science remains one of the least diverse fields in STEM.”

It might have been easy to dismiss or downplay that fact. Instead, the department immediately took steps to change it. Menold led the way in developing a department plan for diversity, which over the past five years has reworked all 100-level courses to make them more effective in preparing more students to enter the major. Part of Menold’s LANDInG work will focus on an examination of 200- and 300-level course content, again with a focus on retaining diverse students interested in the geosciences. The program is also interested in fellows “improving DEI across STEM.”

“As the student population diversified over the past seven years, Carrie Menold put forth huge personal efforts to change the way she teaches and supports students,” says Dr. Thom Wilch, dean of faculty and Earth & Environment colleague. “She is a leader and is way ahead of the curve in terms of centering equity and inclusion in her work as a professor and department chair. Her DEI focus has had strong positive impacts on me personally and the way I teach, on our department, and, most important, on our students.”

Today, Earth & Environment’s student diversity matches that of the overall campus, which also means that Albion’s program is much more diverse than those at most other schools.

Menold explains that the more inclusive curriculum not only meets the needs of students—it also addresses the work that geoscience professions are increasingly doing.

“At Albion, we want any student to feel like studying earth science, environmental science, or environmental studies is an option; the door is open and they can walk through,” Menold says. “More broadly, these careers touch on things that really matter—water, energy, climate change—and if you only have a narrow cross-section of people in those fields, they can’t take into account all the issues that touch regions and people, or solve the problems of today and tomorrow.”

“Dr. Menold has played a leading role in Albion’s ongoing efforts to embrace not just diversity, equity, and inclusion, but true belonging,” wrote Albion College President Dr. Mathew Johnson in his letter of support to the AGU selection committee. Menold’s work, he continued, “will be particularly impactful because the department has recently expanded to include Albion’s environmental science and environmental studies programs, doubling the number of students engaged with this work.” He added that Menold’s fellowship resources will expand the work to all of Albion’s Science Division departments.

Menold concludes: “We’ve had some success in our DEI work. We feel like we’re making our majors more effective and the administration is open to supporting these efforts. I’m looking forward to learning a lot from my peers about how to continue to grow and improve the work while being part of a discipline-wide effort. I’m excited about that.”