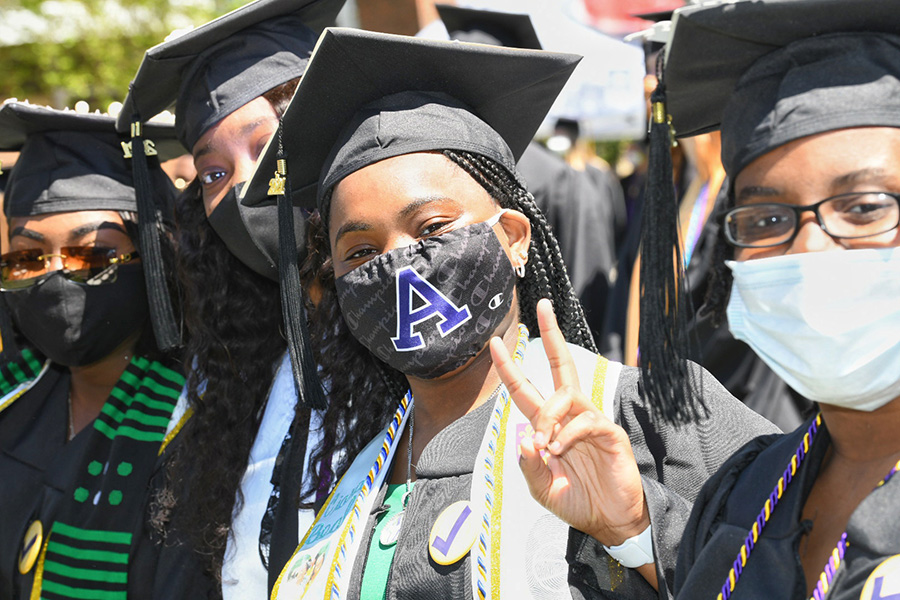 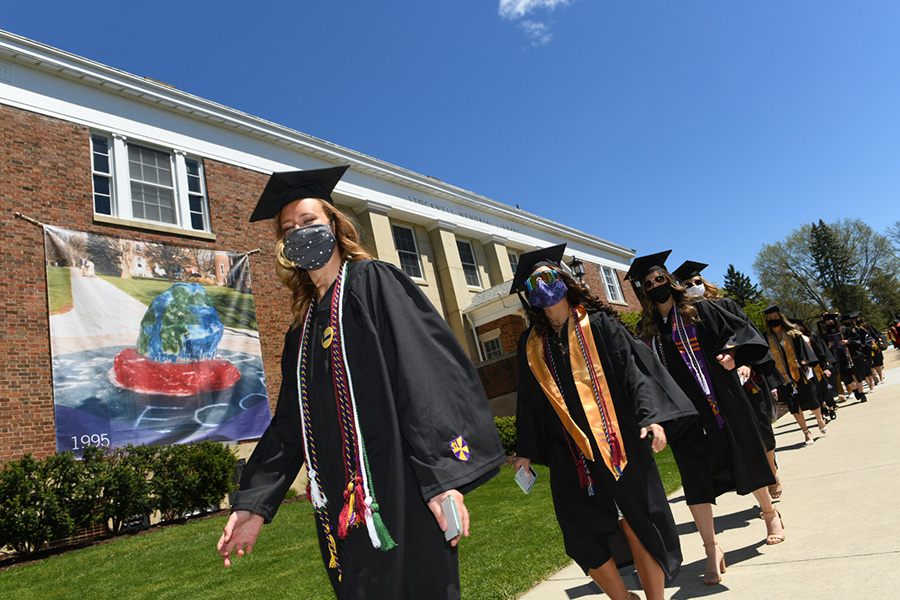 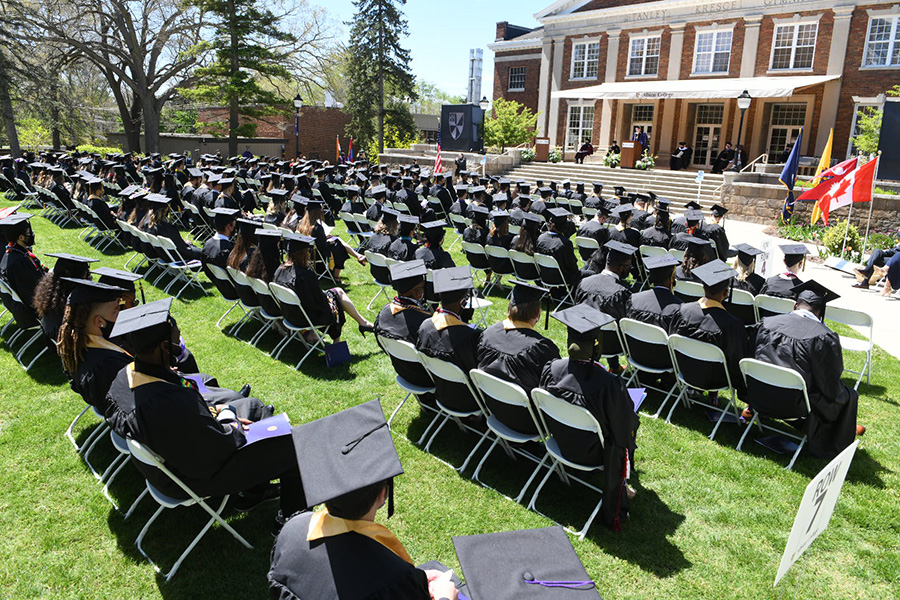 The degree candidates were seated based on their student residence as part of COVID-19 safety protocols. 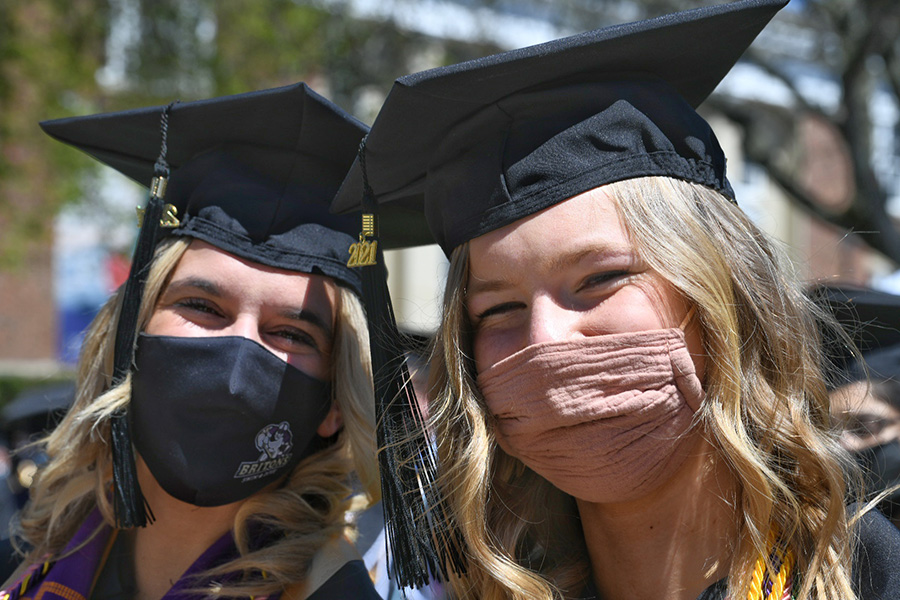 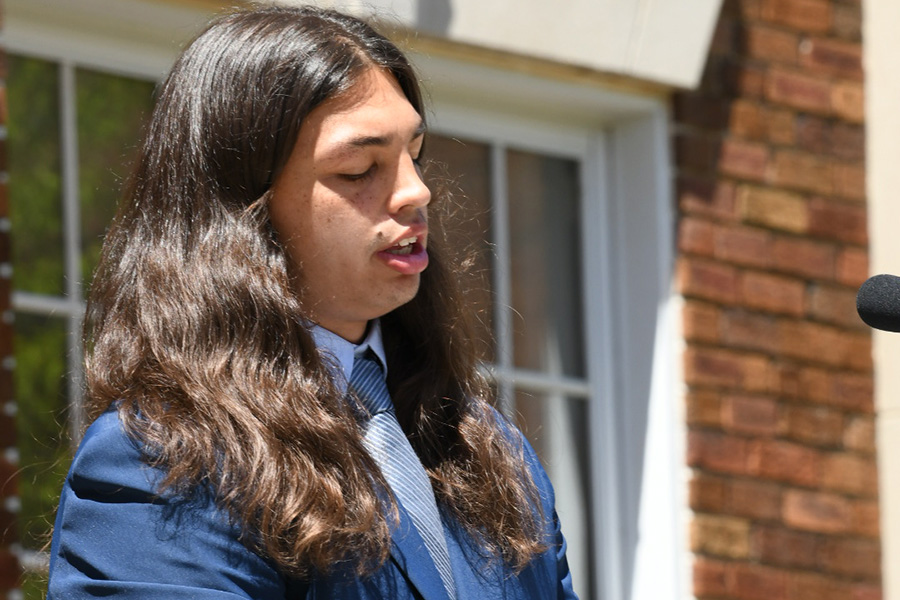 Jason Bigpond, ’22, gave the land acknowledgement, recognizing Albion College's presence on the land of the Council of the Three Fires—the Ojibwe, the Odawa and the Potawatomi. 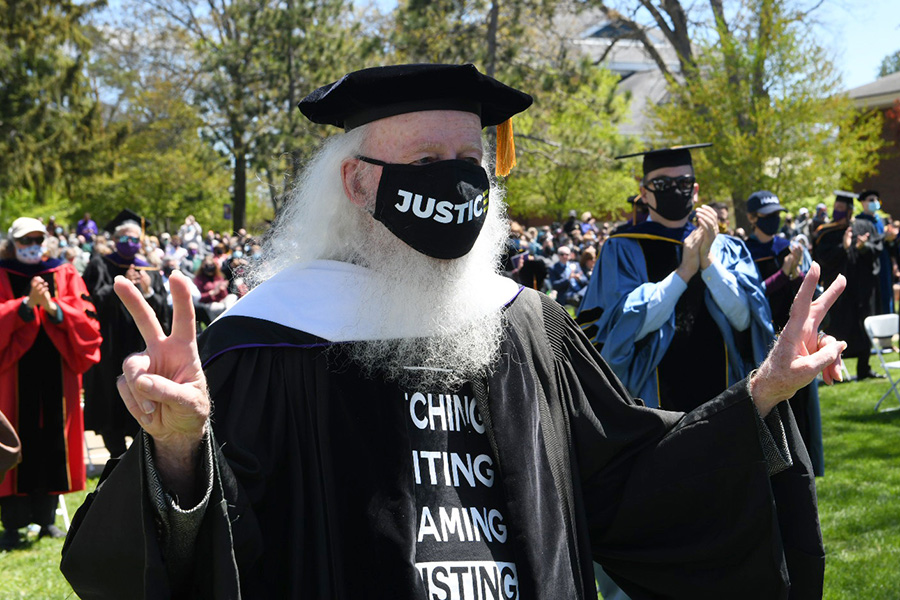 Dr. Wes Dick, professor of history, was among the retiring faculty recognized for their decades of inspiring and impactful teaching. 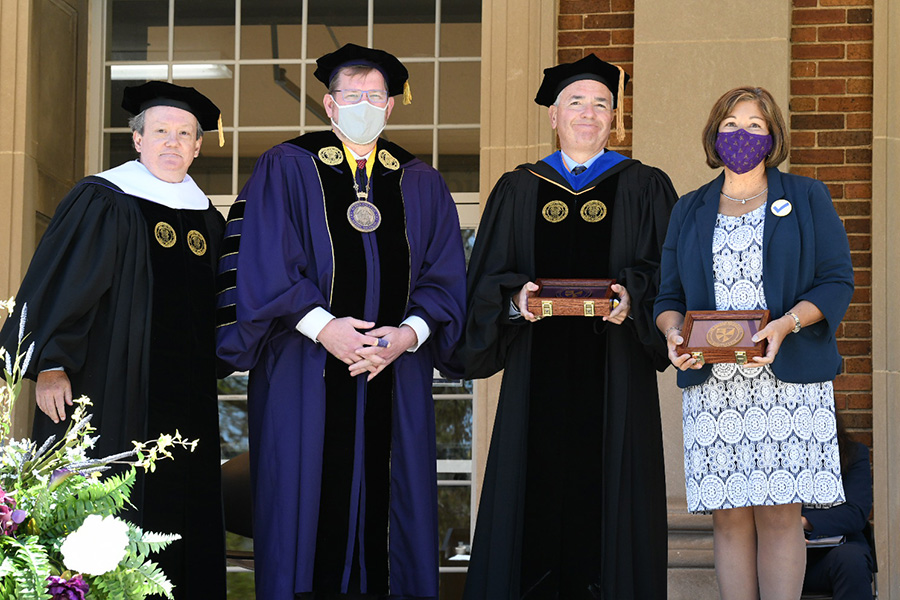 From left: Michael Harrington, ’85, chair of the Board of Trustees, and Dr. Mathew Johnson, president of Albion College, presented the Briton Medallion to past Board Chair Don Sheets, ’82, and Angela Scott Sheets, ’82. 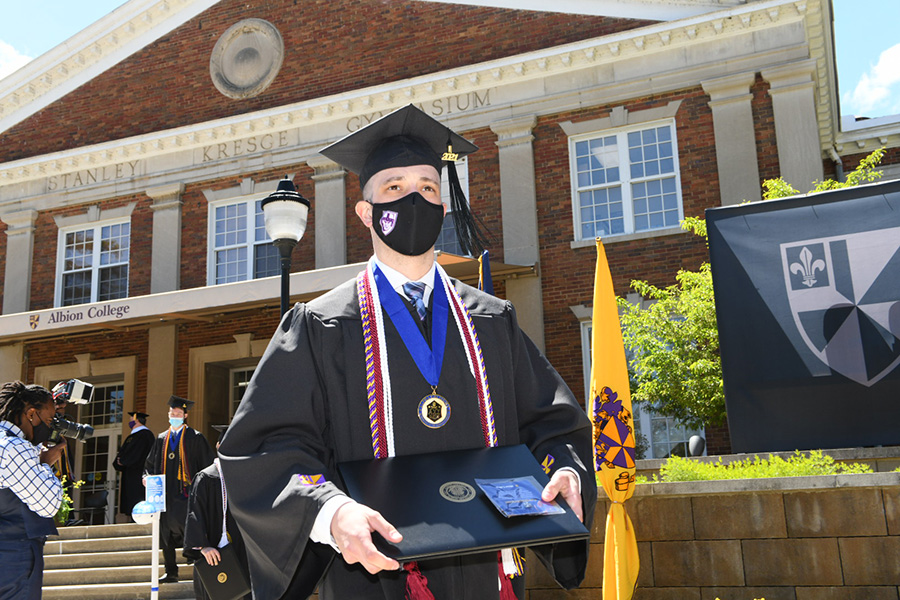 One of those lifetime moments: A newly minted Albion graduate strides into the future. 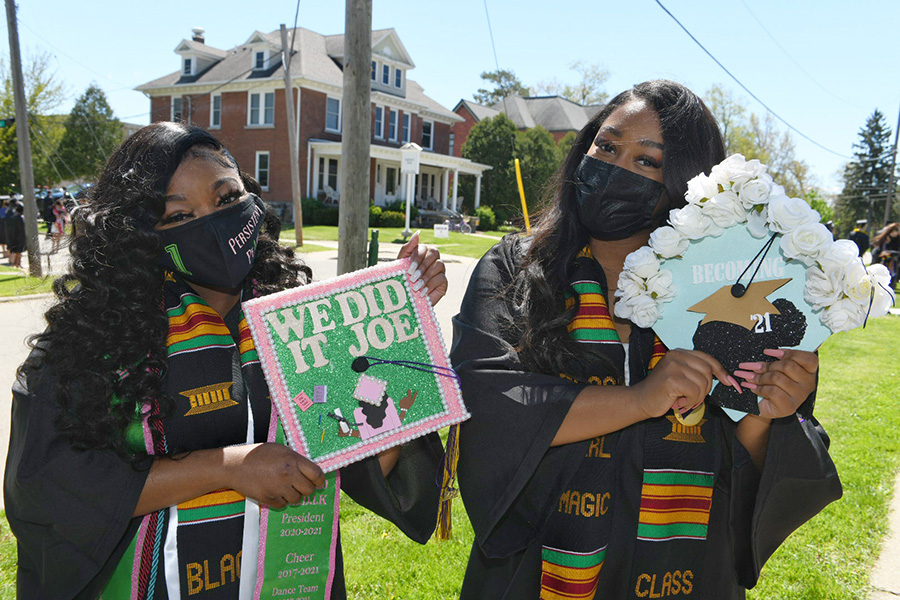 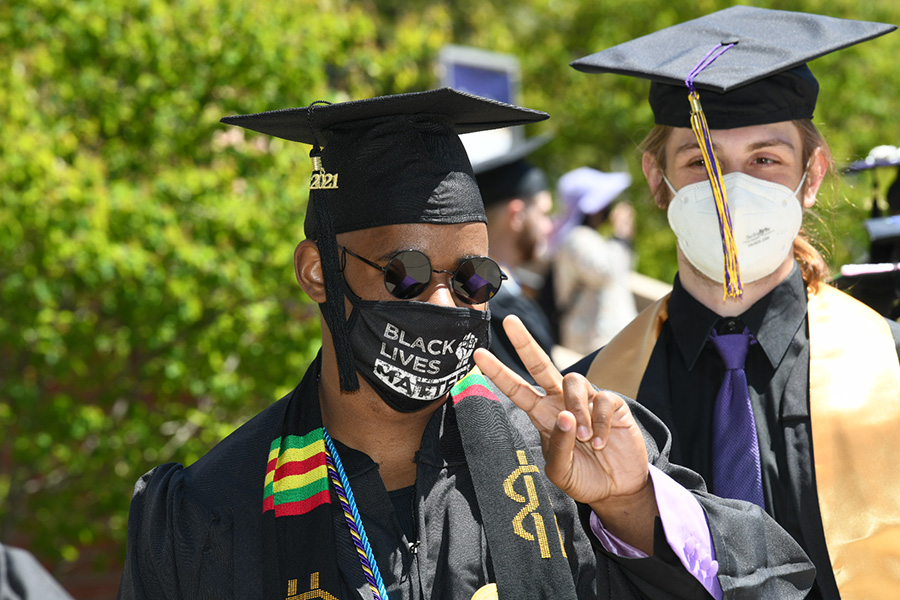 Albion College students, and graduates, create with courage through a liberal arts education of purpose, belonging and action. 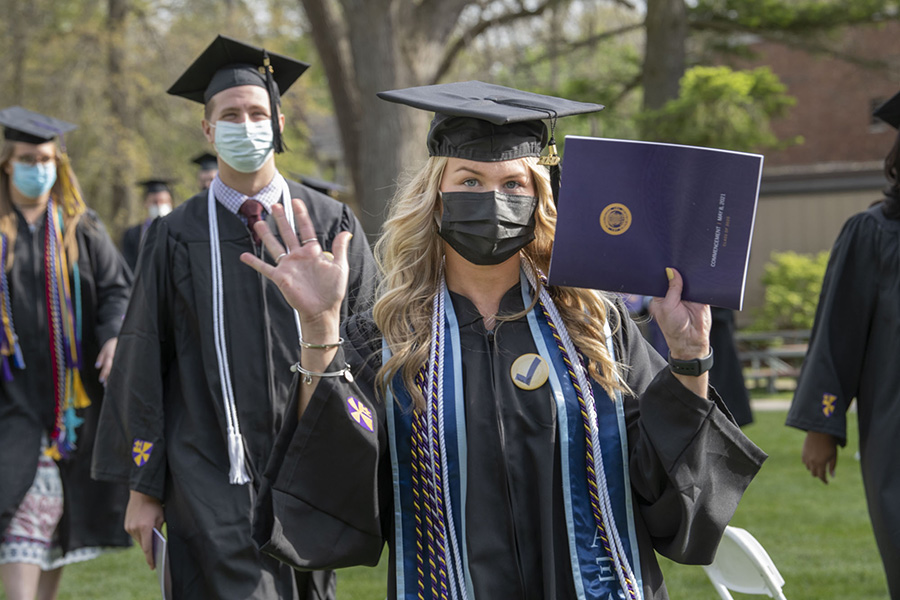 Following the Class of 2021 ceremony, Albion College’s Class of 2020 celebrated its on-campus Commencement. 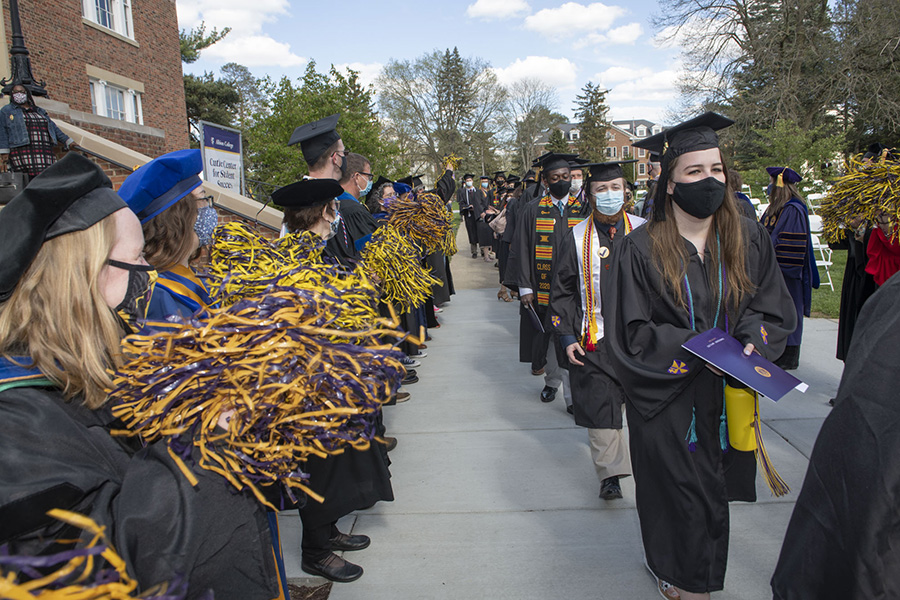 After a virtual ceremony a year ago, more than 50 members of the Class of 2020 returned to Albion to experience their Commencement on campus during the sunny late afternoon of May 8, 2021. 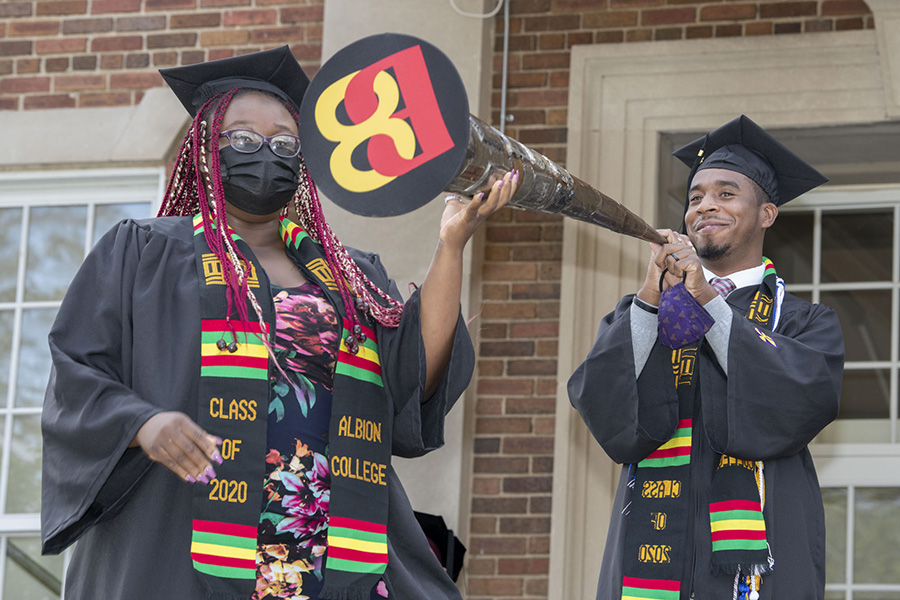 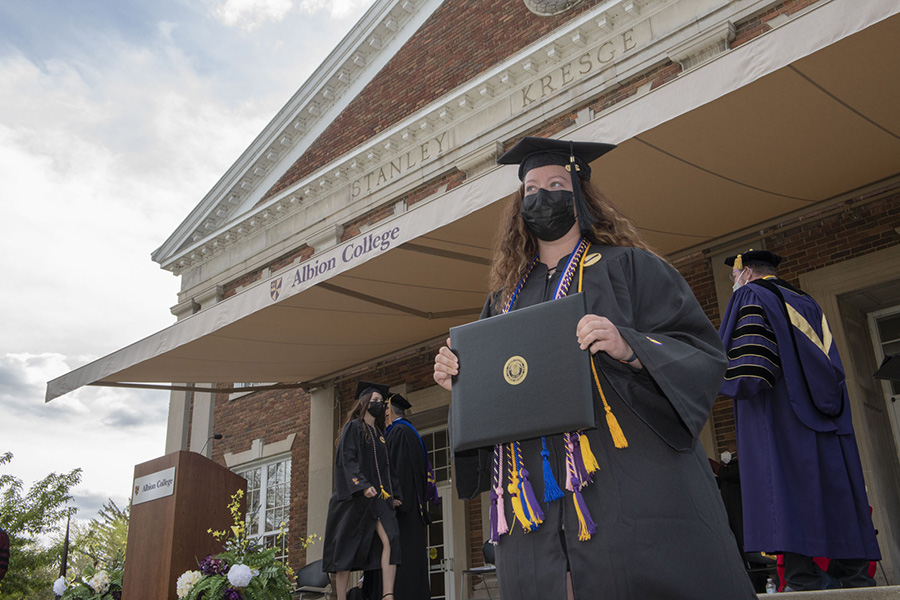 The long-awaited moment finally realized: Class of 2020 graduates heard their names announced on the Quad, then walked across the Kresge Gymnasium front steps that serve as Albion College’s treasured Commencement stage. 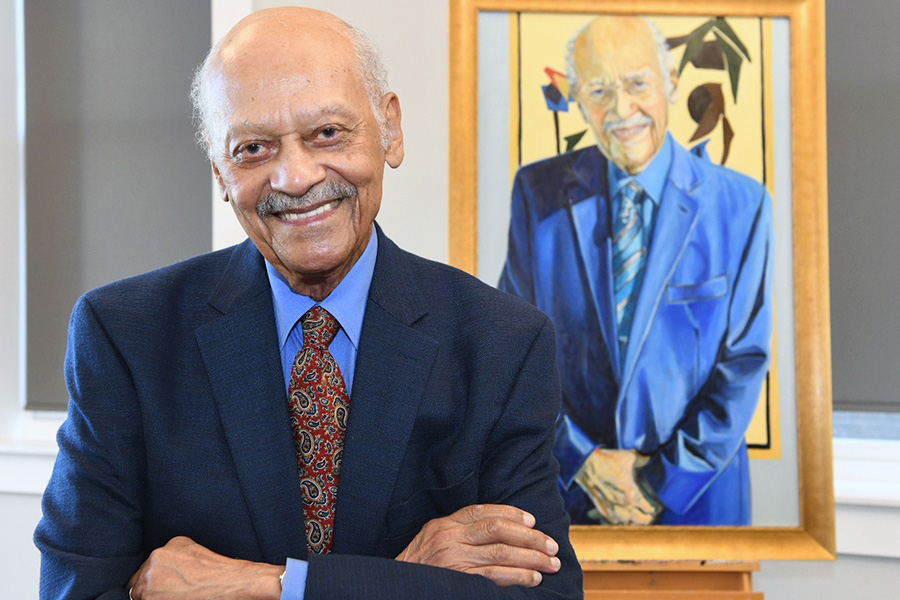 May 7 and 8 were filled with many special Albion moments, including the announcement of the James Curtis Institute for Race and Belonging. At the event Dr. Curtis, ’44, stood next to his newly unveiled portrait painted by Michael Dixon, professor and chair of the Art and Art History Department. 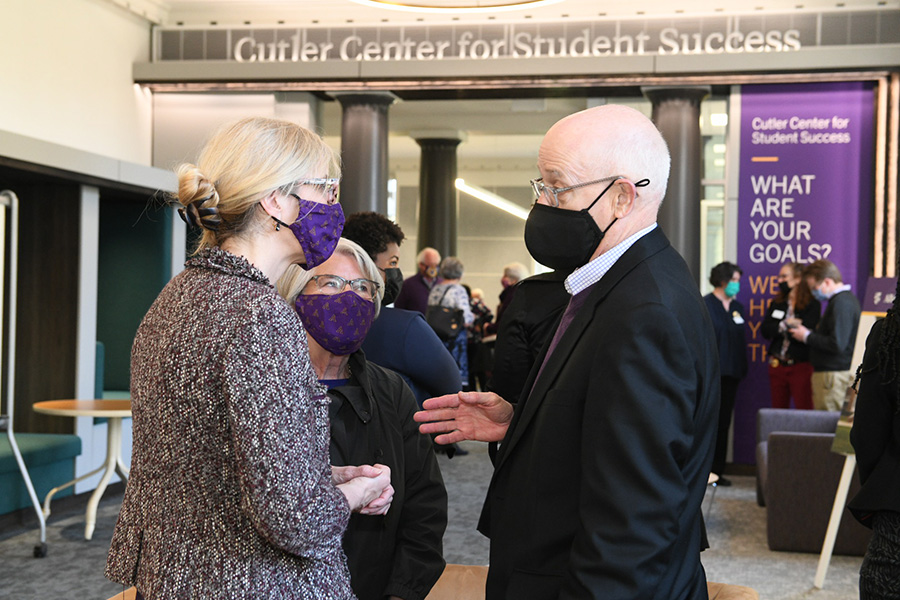 Dr. Shannon O’Neill (left), associate dean for student success, engaged in conversations with visitors during a May 7 open house for the Cutler Center for Student Success and Academic Achievement in Stockwell Library. 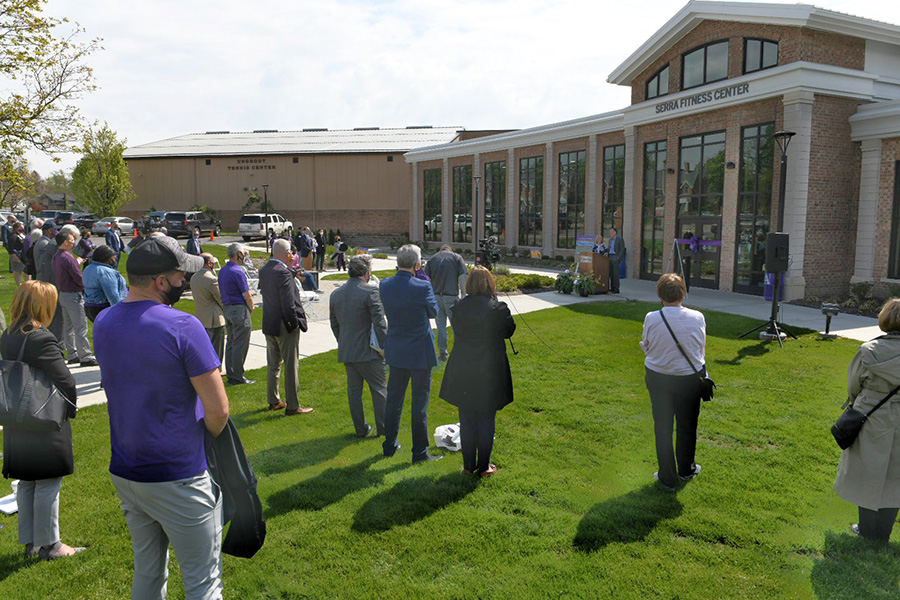 May 7 also saw the ribbon cutting of the Serra Fitness Center, a major expansion of the Dow Recreation and Wellness Center, which opened last fall through a gift from Joe, ’82, and Julie Serra. 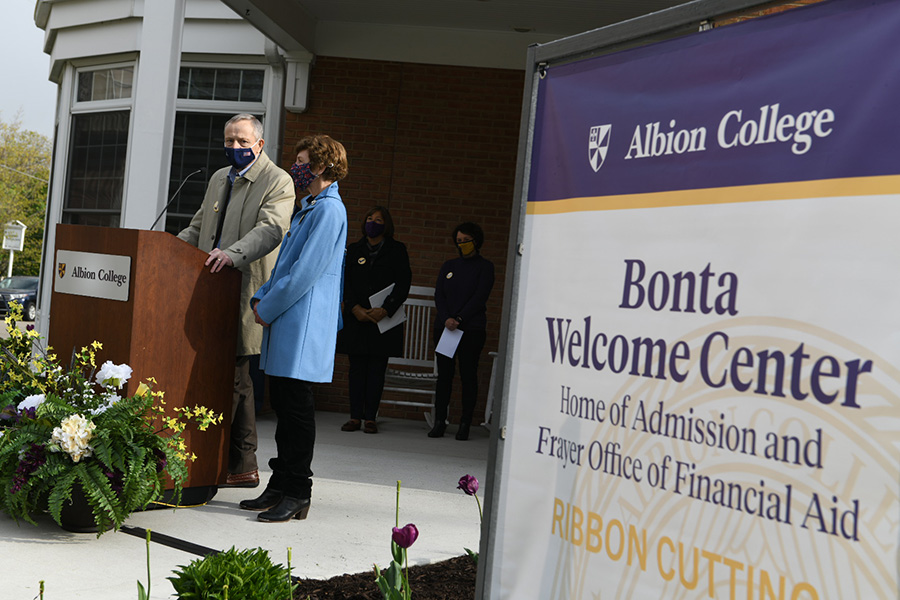 Chuck and Julie Frayer, ’77 ’77, spoke at the May 7 ribbon cutting of the Bonta Welcome Center, a major expansion of the home of Albion’s Admission and Financial Aid offices. The Center is named for Julie’s father, Frank Bonta, ’49, who served and led Albion's admission effort for 44 years. 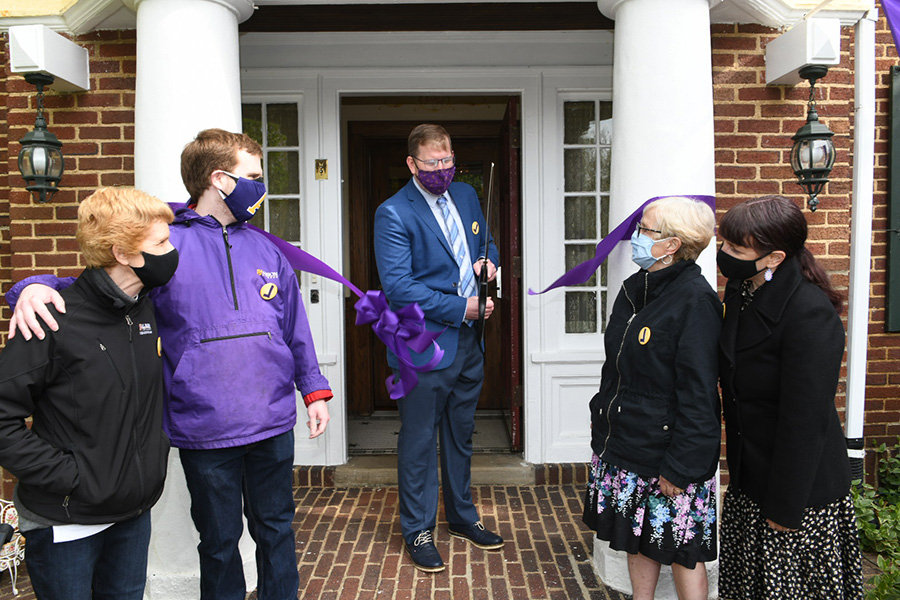 President Johnson cuts the ribbon May 7 to the Seely-Berkey House, a gathering place for faculty and staff at the site of the former Albion Heritage Bed and Breakfast on Michigan Avenue. 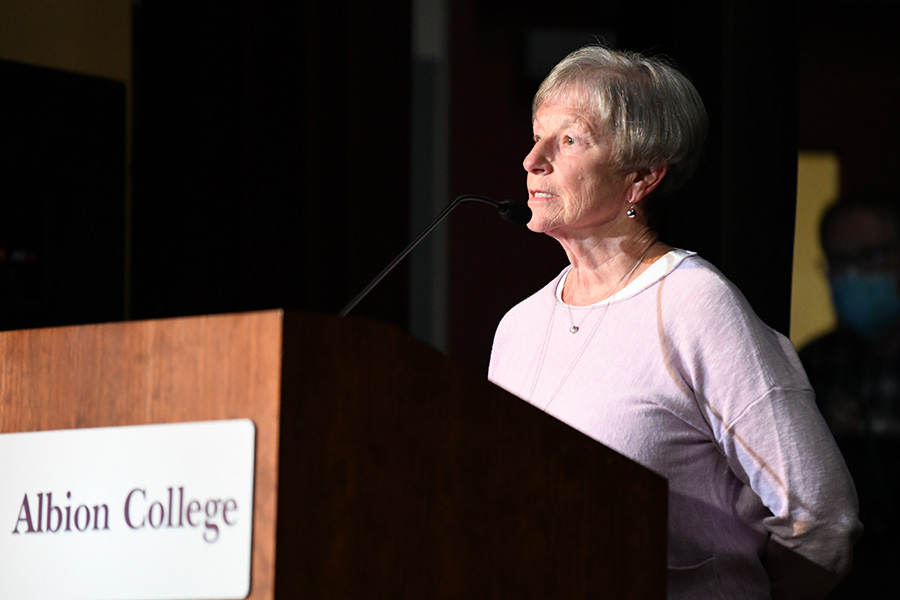 Peg Turner, ’69, retired Albion kindergarten teacher, spoke May 7 about the history of the former Washington Gardner school inside its auditorium. The College, which owns the building, plans to transform and expand the space into the Body and Soul Center, serving all of Albion—community and college.

A truly perfect spring day set the stage for Albion’s 2021 Commencement and 2020 in-person Commencement, both held on May 8. Some 350 members, with their families, attended the 2021 Commencement while later more than 50 members of the Class of 2020 represented the nearly 300 students who earned their degrees during the first weeks of the COVID-19 pandemic.

“When I learned I would become the 17th president of Albion, I never could have imagined this year,” said President Mathew Johnson, whose Albion tenure began in July 2020. Referencing everything from takeout dining to completely new models of classroom instruction, Johnson praised the students’ ability to adapt and thrive in pursuit of their education.

“Through it all you supported each other,” he remarked. “That support is the first thing I hope you remember.… Together you rose to the occasion and demonstrated what it means to be a Brit.”

“Albion students are known for two key things: our engagement in the communities around us, and the vast expanse of causes, activities and events we take part in,” said Latrell Crenshaw, ’21, delivering the senior address. “On this day, and in this moment, we transition from being the heirs of humanity’s promise, to being its caretakers.… The tasks ahead will not always be easy, but we are capable of meeting them,” he concluded. “We have already done it here. Now we go on to do it everywhere.”

Past Board of Trustees Chair Don Sheets, ’82, and his wife, Angela Scott Sheets, ’82, were each honored during the Class of 2021 ceremony with the Briton Medallion. Describing the couple as “Britons of action,” current Board Chair Michael Harrington, ’85, stated that “for 30 years, they have helped launch new programs, partnerships and capital improvements to make Albion a shining light for learning and leadership.”

In delivering the faculty farewell, Dr. Ian MacInnes, professor of English, noted the newest graduates’ achievements as scholars, researchers, club members and activists. “When I welcomed you to Albion (at 2017 Matriculation), I told you that your job was to learn to imagine so well that when I came back on stage to give you the farewell from the faculty, you would inspire me. I can tell you that you have succeeded. We are inspired by the future that you have asked us to help you imagine.”

The literary scholar concluded with words of wisdom from a galaxy far, far away. “Strong is Vader. Mind what you have learned,” MacInnes said. “Save you it can.”

In her second farewell to the Class of 2020 (the first was for last year’s virtual Commencement), Dr. Nicolle Zellner, the Herbert H. & Grace A. Dow Trustees’ Professor in the Sciences and chair of the Physics Department, reflected on the day’s unique circumstances.

“There are so many graduates who did and do amazing things, and you will, too,” Zellner said. “You have an amazing toolkit to solve problems, tackle challenges, make memories. Go out into the world and do great things. And remember, Albion College will be waiting for you to come home—like you did today.”

Watch the May 8 Commencement ceremony for Albion College's Class of 2021.

Watch the in-person Commencement ceremony for Albion College's Class of 2020, held May 8, 2021.