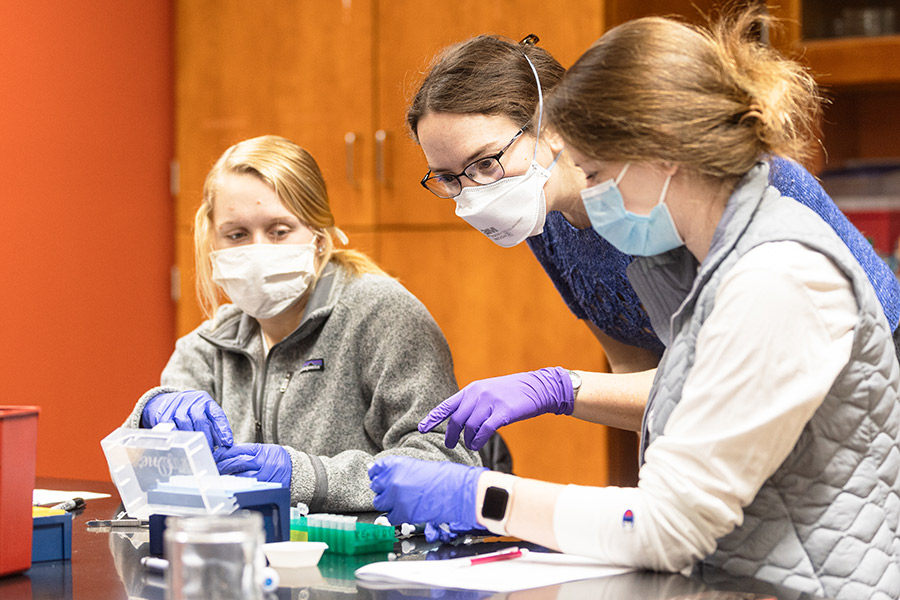 Like pizza, tacos and hummus before it, sushi is becoming an American food. Even in the heart of the Midwest, it’s not hard to find sushi — it’s available at numerous area restaurants and right on campus, where students buy hundreds of pieces each week.

Sarah Stovall, ’24, however, is not one of those students. “My mom is deathly allergic to fish, so I’ve really never eaten it,” she says. “I was intrigued to learn more about sushi, but I still haven’t tried it.”

Stovall’s learning about sushi took place not in a restaurant but in the classroom, in Dr. Abigail Cahill’s Ecological Genetics class. Along with learning how genetics sheds light on species diversity and problems like climate change, the class did a hands-on project, using DNA to determine whether some locally made sushi was indeed the salmon, tuna and other fish they were expecting.

“It’s actually pretty common that the fish used in sushi is mislabeled,” says Cahill, assistant professor of biology. She notes that historically, American fish suppliers have renamed some species in order to make them more appealing to consumers. In the case of sushi, “It’s not unusual to see less expensive fish labeled as something more expensive,” Cahill says. “This is so common that biology teachers can buy kits with everything prepared for testing sushi or other raw fish.”

Cahill is quick to point out that this mislabeling doesn’t appear to be at the restaurant level; rather, the “much higher up” suppliers — who sell fish to restaurants — seem to be taking advantage of the fact that from a visual and taste standpoint, it can be hard to distinguish between varieties, even species, of tuna, salmon and other popular fish. 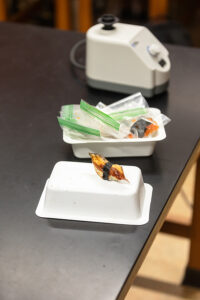 When “sample” takes on a new meaning: a piece of sushi to be tested in the lab. (Photo: Terrence Kendricks, ’24)

And while it’s a class project, Cahill notes that sushi testing is also a perfect example of how genetics informs environmental studies. “It’s very important to do things like count trees and frogs and microorganisms in water,” she says. “But there are also many questions that can only be answered by looking at DNA. The genetic diversity in a population can be as important as how many individuals are in that population. And sometimes — not just with sushi — you can’t be sure what species you’re looking at, without the DNA.”

In the end, the sushi-testing project revealed two samples that were mislabeled, two samples that were correctly labeled, and a whole lot of inconclusive samples, probably due to technical errors along the way. But, says Cahill, obtaining the results was actually the smallest of priorities.

“A big part of this project is giving students experience with the molecular techniques of DNA extraction and identification,” says Cahill. “Doing the work themselves also helps them to better understand papers written on work using these techniques.”

And, says Stovall, the project made her feel a bit more like a scientist.

“We did get some conclusive results, so we are able to contribute some data to this issue,” she reflects. “Sequencing databases are continuously added to, and it’s fun to think that we’re adding to that. Other people could benefit from this project that we did.”