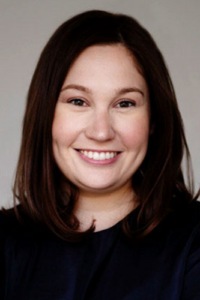 Amy Spitalnick, former executive director of Integrity First for America (IFA), will be the guest lecturer for the annual David Aldrich Speaker in Law, Justice and Society Tuesday, Feb. 7 at 7:15 p.m. at Bobbitt Auditorium on the campus of Albion College.

The event is free and open to the public.

“Our democracy has been threatened by violent white supremacist extremism, said Carrie Walling, faculty director of the Ford Institute for Leadership in Public Policy and Service at Albion College. “Amy Spitalnick has been at the forefront of the fight to protect our democratic values and to use the rule of law to hold extremists accountable for their violence. Spitalnick will lead the Albion College campus and community in a conversation about how we can fight back against this extremism and protect our democracy.”

“There are flashpoints like Charlottesville, Pittsburgh, El Paso, the Capitol insurrection and Buffalo – and they go hand-in-hand with the broader normalization of extremism and attacks on democratic norms,” said Spitalnick, who led the successful effort to hold accountable the neo-Nazis and white supremacists responsible for the Charlottesville violence.

Spitalnick most recently served as executive director of IFA, which won a groundbreaking lawsuit against the neo-Nazis, white supremacists and hate groups responsible for the Charlottesville violence.

Under her leadership, IFA became a powerful national voice in the fight against white supremacy and extremism – and its Charlottesville case has emerged as a model for accountability. The granddaughter of Holocaust survivors, Amy has been described as a “modern-day Nazi fighter.”

She also serves as senior advisor on Extremism to Human Rights First and on the advisory board of the Polarization and Extremism Research and Innovation Lab (PERIL) at American University. She has extensive experience in government, politics and advocacy, including as communications director and senior policy advisor to the New York Attorney General and as a spokesperson and advisor to the New York City Mayor. She has also worked for a number of federal, state and local officials, campaigns and advocacy organizations.

David H. Aldrich served as a trial lawyer and chairman of the Litigation Practice Group at the law firm of Foster, Swift, Collins and Smith, P.C. in Lansing. He was a member of the American Bar Association, the Ingham County Bar Association and a fellow in the Michigan Bar Association. His parents, Warren and Louise Aldrich, established the lecture series to honor the spirit of David’s desire to pass along his knowledge of the law to young people.

“For students on our campus who seek to follow the footsteps of David Aldrich, ’75, into the legal field, this is an exciting opportunity,” Walling said. “We are grateful to the Aldrich family for their continued support of campus programming to pass down knowledge of the law to young people in David’s memory.”