Conversation and presentation topics will emphasize that human rights are transnational, extending beyond borders. 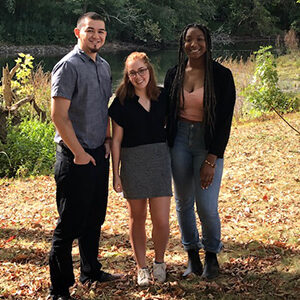 Albion College continues to bolster its presence at the intersection of human rights and higher education through a $52,000 Global Crossroads Grand Challenge grant it recently received from the Great Lakes Colleges Association (GLCA) to host a human rights conference next year.

“Challenging the Borders Between Domestic and International Human Rights,” to run April 30-May 2, will explore and critically evaluate different borders that have emerged in human rights research and practice. Faculty, students and practitioners from institutions around the world comprising the GLCA’s Global Liberal Arts Alliance (GLAA) will have multiple opportunities to learn about and discuss pressing human rights challenges in panels, lectures, working groups and workshops.

“There are borders within the human rights movement that need to be challenged — between theory and practice, between different categories of rights,” says Dr. Carrie Booth Walling, professor of political science at Albion College and the grant application’s lead writer. “We’re challenging the idea that human rights are divisible. Identity rights, labor rights, refugees and immigration, climate and the environment — we’re going to invite people to present work in these areas as we think about how we challenge those borders. These topics are transnational; they affect people in multiple countries simultaneously.

Walling, who also serves as faculty director of Albion’s Gerald R. Ford Institute for Leadership in Public Policy and Service, is an established expert in the field of human rights. She is the author of two books, including Human Rights and Justice for All: Demanding Dignity in the United States and Around the World (Routledge, 2022). Walling has written op-eds and given interviews for The New York Times and Detroit Free Press, among other publications.

In 2021, Walling and several of her students founded the Human Rights Lab at Albion College. With programming launching this fall, the Lab engages students and community members in generating solutions to human rights and social justice problems through research, policy and advocacy.

“Human Rights Lab students will help to organize the conference and also serve as hosts,” Walling says. “I really want this conference to engage and meet undergraduate students where they are and in a really meaningful way. For example, many young people today argue that the greatest human rights issue facing the world is climate change, and so we’re going to put climate and environmental rights at the center of our conference conversations.”

An important facet of the conference will be exploring the “border” between domestic and international human rights. Walling cites as one area of focus the 2020 murder of George Floyd by Minneapolis police officers, which, she says, “inspired the largest transnational movement against systemic racism, and is a big agenda item at the United Nations right now.”

Dr. Midori Yoshii, professor of international studies at Albion and the College’s GLCA/GLAA liaison, also finds springboards for discussion in the 20th century.

“Americans tend to think human rights violations are a terrible problem caused by despotic governments overseas and do not readily see the interconnectedness of global and domestic issues,” she says. “During the Cold War, for example, the U.S. government accused Moscow of its violation of human rights of their political dissidents, while the Russians countered by pointing out U.S. racism toward its own citizens.

“Hosting this conference will be a great opportunity for us to break down the domestic vs. foreign dichotomy and have us realize human rights issues are universal,” Yoshii adds. “In the long run, I hope this conference expands our international perspectives and furthers Albion’s diversity-embracing culture.”

Beyond individual sessions, the conference will also feature at least one keynote speaker as well as community-building activities in the City of Albion. According to the grant proposal, “participants will leave the conference with an increased awareness of human rights policy and advocacy strategies and stronger cross-campus connections among faculty, students and staff working in the areas of human rights and social justice.”

“Dr. Walling worked with Dr. Yoshii to develop a competitive proposal that spoke directly to the purposes of the grant,” says Dr. Ron Mourad, provost and professor of religious studies at Albion College. “I’m thrilled that the GLCA chose to invest these grant resources to foster collaboration in international human rights research. This conference promises to create a new community of practice that includes Albion students with emerging scholarly interests in human rights — a community with the potential to produce lasting collaborations.”